Towards a World Without the United States

In these columns, Thierry Meyssan has often explained the internal contradictions of the United States in order to emphasize the manner in which they would break up. In this article, he ponders the impact of two events which are likely to start the decomposition process. 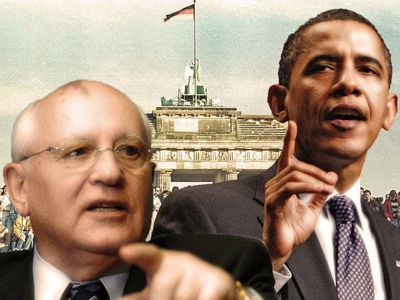 The American Empire is the hypertrophied remains of two players in the Cold War. The Soviet Union is gone, but the U.S. is still there and has taken advantage of the absence of competitors to monopolize global power.

In 1991, logic would have had Washington using its resources to develop its business and prosperity. But after several hesitations, the Republican Congress foisted its global imperialism on President Clinton in 1995 by voting for rearmament even though there were no more opponents. Eighteen years later, the United States, having dedicated its resources to conducting a solo arms race, is out of breath while BRICS have arisen as new competitors. The 68th General Assembly of the United Nations, last month, was the scene of widespread revolt against the unipolar U.S.

According to Mikhail Gorbachev, the fall of the Soviet Union was inevitable starting in 1986, when the Soviet state found itself overwhelmed by the Chernobyl nuclear accident, unable to protect its people. If one needs to draw a parallel, the U.S. federal government has not yet faced such a situation, even if the disaster caused by hurricane Katrina in 2005 and Sandy in 2012, and the bankruptcy of local governments have already shown the incapacity of federated states.

The blocking, for two weeks or more, of the operation of the U.S. federal government is not due to a disaster, but to political gamesmanship. All that is needed for it to end is an agreement between Republicans and Democrats. But, for the moment, only a few special services have been waived, such as military chaplains. The only real departure from gridlock was the authorisation of borrowing authority for six weeks. This agreement was required by Wall Street, which did not react to the closure of the federal government, but was terrified of the prospect of a Washington incapable of facing its financial deadlines.

Before the Soviet Union collapsed, it tried to maintain itself through savings. Overnight, Moscow terminated the economic support brought to its allies. First, those of the Third World and then those of the Warsaw Pact. In consequence, its allies, in order to survive, had no other choice but move to the enemy camp, that of Washington. Their desertion, symbolized by the fall of the Berlin Wall, further accelerated the decomposition of the Soviet Union.

It is manifestly to avoid this shock, at a time when Russia is in the process of peacefully triumphing in the Middle East, that the Obama administration waited so long before suspending aid to Egypt. Certainly, under U.S. law, this aid became illegal after the military coup that overthrew the dictatorship of the Muslim Brotherhood. But nothing required the White House to call a spade a spade. So, for three months, it sufficed to avoid saying "coup" in order to secure Egypt’s loyalty to the imperial camp. Nevertheless, although nothing has changed in Cairo, Washington has cut off rations.

President Obama bet on reducing the US budget proportionally and progressively so that the country could avoid collapse, abandon extravagant pretentions and become a State among others. The decrease by approximately 1/5th of the size of its armed forces was a good start. However, the blocking of the budget and the suspension of aid to Egypt show that this scenario is not possible. The formidable U.S. power cannot decrease without a few jolts at the risk of breaking up.