Truth as an Issue

What has been happening in Syria for the past three years? According to NATO and GCC media reports, the "regime" has shed blood to suppress a democratic revolution. However this version is contradicted by the current support for the government estimated at, according to sources, between 60 and 90 % of the population. The truth is quite different: NATO and the GCC have successively lost a war of succession and a fourth generation Nicaraguan-type war. It is they, and they alone, who organized and financed the death of 120,000 Syrians. 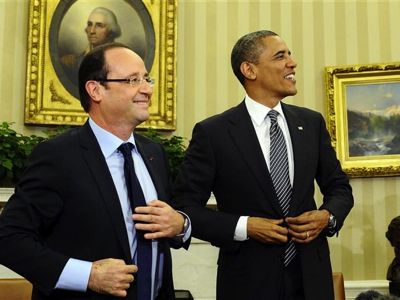 One of the challenges of preparing for the Geneva conference is to write the history of Syria. The NATO powers and the Gulf Cooperation Council are trying to impose their version of events which would give them a clear advantage at the negotiating table. Hence a sudden avalanche of articles and summary reports in the Western and the Gulf press.

The West and the GCC assert that the Syrian crisis is in line with the "Arab Spring ." According to this view, the "Bashar regime" would have bloodily suppressed the democratic aspirations of its people. NATO and the GCC would have then intervened to protect the civilian population.

The reality is quite different: the United States planned the destruction of Syria at a meeting on September 15, 2001, at Camp David. They began to prepare this by adopting the Syria Accountibility Act on December 12, 2003. They tried to plunge Syria into war first by causing the adoption of Resolution 1559 by the Security Council, then killing the former Lebanese Prime Minister, Rafik Hariri and accusing President al-Assad of ordering the assasination. This scenario having failed, they subcontracted the war to the United Kingdom and France who prepared themselves via the Treaty of Lancaster on November 2, 2010. The signal for the commencement of operations was given by the United States from Cairo in early February 2011.

From that date, and for 15 months, NATO and the GCC launched a fourth generation war, based entirely on their domination of the mass media. They convinced the world, including the Syrians, that the whole country had risen, though the most important events did not exceed 5,000 people. Thanks to snipers and commandos, they staged a bloody crackdown. However, in March-April 2012, after the fall of the Islamic Emirate of Baba Amr, Nicolas Sarkozy negotiated the withdrawal of France, while in May, the Syrians began to doubt Al-Jazeera’s reports and in June, Washington accepted its defeat at the Geneva Conference.

During this period , the combatants were either Syrian Takfirist (including 3000 captured in Baba Amr) or foreign professionals, particularly the Libyan members of al- Qaeda controlled by Abdelhakim Belhaj. Together, they formed the Free Syrian Army, flanked by British and French officers, with the logistical support of Turkey.

François Hollande ’s election as French president and the appointment of Laurent Fabius as Zionist Ministry of Foreign Affairs relaunched the war. Relying on CIA General David Petraeus and the expertise of Ambassador Robert S. Ford (former assistant to John Negroponte), France signalled a new war, this time Nicaragua style, by gathering the "Friends of Syria" in Paris on July 6th, 2012. Two weeks later, a mega-attack decapitated the army by assasinating members of the National Security Council. Immediately, 40,000 foreign jihadists, supported by a few thousand Syrians and supervised by French and British officers, began the assault on Damascus. This was the moment of truth. The Syrians, hitherto very passive, helped their army to defend the capital and repel the invaders. There followed a year of cruel and bloody war that killed more than 100,000 martyrs.

During this period, the United States stood back , leaving their allies to do the work on site. At most, they tried to influence Qatar and Saudi Arabia to limit the weight of jihadists and promote secular mercenaries. Recruitment centers were opened in Tunisia and Afghanistan. Airlifts were organized from Libya and Yemen to deliver tens of thousands of jihadists who came to die in Syria. As in Nicaragua, they found Syrians to support them, but ultimately they served to control the "liberated zones" rather than to fight the regular army face to face.

From August, 2013 to today: the failure of NATO

Noting their new failure, the NATO and GCC powers tried to ignore the Russian and Chinese vetoes in the Security Council. By organizing a crime to which they would attribute a huge symbolic significance, they would justify international intervention to protect civilians so they could finish by bombing the country as they did in Libya.

The chemical attack on ghoutta , August 21, 2013, was organized by NATO. The weapons were transported from a Turkish army barracks to Damascus and the usual media war was mobilized to make this episode more serious than any other event.

But the unexpected deployment of the Russian fleet off the Mediterranean coast would have forced the Pentagon to attack from the Red Sea, flying over Jordan and Saudi Arabia, that is to say, plunging their allies into the war. Washington, having given up on entering a regional conflict, U.S. diplomacy has since sought to prepare for the Geneva 2 conference.

The Geneva 2 Conference, which will probably be held in late January, 2014, will put an end to three years of war. Depending on the version we retain of events, Syria will have experienced a civil war or will have been victorious against foreign aggression.