Turkey should prepare itself for mass exodus of fighters from Syria

We are publishing below an editorial from the Turkish daily Today’s Zaman. The columnist points to the defeat of the Syrian Contras which, in her view, spells out a defeat for Turkey who has given them all out support. While adopting the Atlanticist misrepresentation of the facts, she warns her country against a foreseeable exodus of extremist fighters who will not fail to seep into neighboring countries. 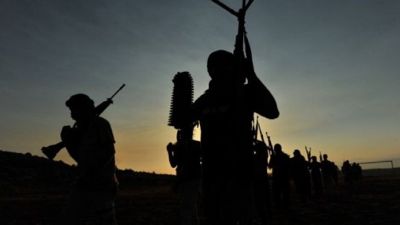 Syrian President Bashar al-Assad’s regime has been making significant advances on the ground against opposition fighters in a civil war of over two-and-a-half years, raising the possibility of the potential risk of a massive exodus of opposition fighters to neighboring countries including Turkey. Reports coming from both NATO as well as Turkish military sources provide important evidence of the Syrian regime’s advances against the opposition, in particular in the past several months.

An Ankara-based Western diplomat told this columnist that surface-to-air Patriot missiles based on Turkish soil have seen Scuds being launched by the Assad regime forces against opposition targets almost every day. Similarly, Patriots are detecting an increased number of long-range artillery rockets being fired at opposition targets as well as seeing helicopters and aircraft belonging to the Syrian Air Forces (SAF) flying very frequently supporting the ground troops in their offensive against the opposition.

According to Turkish military sources who spoke to this columnist, the Syrian Air Forces are able to generate 100 sorties a day with helicopters and aircraft. Fifty percent on average comprise combat sorties and 25 percent general transport aircraft sorties, while the remaining 25 percent constitute training of Syrian army personnel. The usual suspects behind Syria regaining military strength are partly Russia and Iran as they have been giving technical assistance including training for new pilots joining the SAF.

Given that many international observers thought the SAF would soon lose capability to maintain operations, 100 sorties a day on average, which makes 700 sorties a week, is massive, says an Ankara-based Western military official.

“This is a big number. The SAF has become very effective in avoiding the Free Syrian Army [FSA] in opposition air defense, which is composed of mostly small guns, air defense shoulder-launched missiles seized from the Syrian army, as well as medium to low-range missile systems,” says a Turkish military source.

At the start of the conflict in Syria until January of this year, we have been constantly seeing on various TV channels Syrian military helicopters and aircraft being shot down by the opposition. But not anymore. The increased strength of the Syrian Air Forces has also been making it possible for Syrian ground forces to get more support from helicopters and aircraft, hence enabling good coordination between the Syrian artillery and air force.

“This is the biggest morale booster for ground forces when they get help from aircraft to drop bombs on opposition targets when they are struck,” says an Ankara-based Western military attaché.

As the Syrian military has been regaining strength, opposition fighters have been on the losing side.

One of the reasons for the opposition losing strength has been internal divisions, with some of them behaving like warlords getting engaged in looting activities, in addition to the involvement of extreme Islamist groups such as the Al-Nusra Front in the fight against the Assad regime, complicating the opposition’s coordinated fighting strategy. The other has been the betrayal of the Syrian opposition by Western powers, which refrained from giving military support to opposition fighters partly out of a concern that the arms supplied by them would go into the hands of extreme Islamist groups such as Al-Nusra.

In short, the opposition was abandoned by the West at the expense of brutal dictator Assad gaining significant strength in the civil war.

Turkey, which has an approximately 900-kilometer border with Syria on its south, is unfortunately among the losers of the Syrian war since it has pursued an ill-conceived policy by purely backing the Syrian opposition, while basing its strategies on the quick fall of the Assad regime. On the contrary, Assad has appeared to have been regaining ground, while the opposition lost its fighting edge. It is not surprising that we have been seeing the beginning of the end of the Syrian opposition.

In the meantime, as Ankara has lately begun to realize that there is no guarantee that military supplies via Turkish territory destined for the Syrian opposition are going into the right hands once they cross the Turkish border, it has appeared to have slowly been taking measures to prevent Turkish soil from being a supply route for the opposition fighters. Turkey’s increased security measures against smugglers crossing the Turkish border from Syria are among the evidence that Turkey is tightening its control of supply routes via its territory. Turkey might have been saying enough is enough.

However, as the Syrian regime has been recapturing some opposition strongholds and re-gaining significant military strength as outlined above, we may begin seeing in the near future a mass exodus of fighters to the neighboring countries including Turkey.

Turkey might be preparing itself for a worst-case scenario of mass exodus from Syria, examining the spare area if any is left in the refugee camps where it has already been hosting over 700,000 Syrian war refugees. Alternatively, Ankara may begin facilitating the return of defeated extreme Islamist groups who have escaped to Turkey to where they came from.