François Hollande was elected president by cultivating ambiguity. Yet it was easy enough to read his previous statements to see full support for the State of Israel. The change he had announced to his constituents has not occurred. On the contrary there has been continuity with his predecessor. We cannot but note that France has gradually abandoned its policy of independence to stand alongside the United States and the last colonial state. 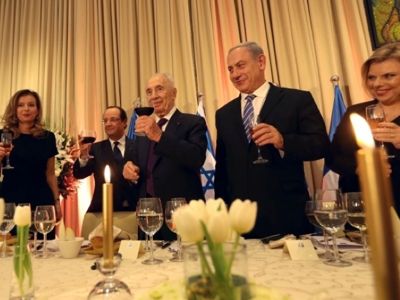 Some commentators have explained the French position in 5 +1 negotiations with Iran as dictated by Saudi Arabia, or through reference to the Jewishness of Hollande’s Foreign Minister, Laurent Fabius. This ignores that French policy in the Middle East has profoundly changed in nine years.

It all started in 2004 with the break between Jacques Chirac and Bashar al-Assad. The Syrian President had promised his French counterpart to favour Total’s tender. But when the French proposal reached the palace, it was so disadvantageous for the country that the president changed his mind. Furious, Jacques Chirac broke with Syria and presented Resolution 1559 to the Security Council .

Then, the French elected Nicolas Sarkozy without knowing that he had been partially raised by one of the principal leaders of the CIA, Frank Wisner Jr. Not content with having been fabricated ​​by the United States, he discovered Jewish roots and cultivated his Israeli relations. International policy was dictated by Washington but because at the time there was no difference between Israel and the United States, he appeared only as being at one with them.

François Hollande had, for 10 years, been designated secretary general of his party because of his mediocrity: directing no current and not being vassal to any leader, he could keep house while maintaining a balance between the contenders at the Elysee. He devoted himself to never having a personal opinion, to remaining as transparent as possible. So much so that during his presidential election campaign each saw him as a moderate man who could surround himself with experienced personalities. His supporters have been the first to be hurt by this.

The reality of François Hollande emerged only once he arrived at the Elysee. Expert in domestic policy, he does not know much about international relations. In this area, his convictions come to him from illustrious socialist personalities.

Thus, he had placed his nomination under the auspices of Jules Ferry, colonization theorist. In Le Figaro, his friend, Israeli President Shimon Peres glowingly compared him to Léon Blum and to Guy Mollet, although the latter is no longer popular in France. In 1936, the former had proposed to surpass the UK by creating the State of Israel in Lebanon, which was then under French mandate. In 1956 the latter attempted to seize the Suez Canal with the help of the Israeli army.

During his ten years at the head of the Socialist Party, François Hollande limited his interventions on the Middle East, of which here is a brief anthology:
• In 2000, when southern Lebanon was occupied, he along with Bertrand Delanoe prepared plans for Prime Minister Lionel Jospin to travel to Palestine. His speech includes a condemnation of Hezbollah which he likens to a terrorist group.
• In 2001, he demanded the resignation of geopolitician Pascal Boniface, guilty of having written an internal memo criticizing blind Party support for Israel.
• In 2004, he wrote to the Superior Audiovisual Council to challenge the authorization given to broadcast Al -Manar. He continued pressure until the channel of resistance was censored.
• In 2005, he was hosted in camera by the Representative Council of Jewish Institutions in France (CRIF). According to the minutes of the meeting, he supported Ariel Sharon and strongly criticized Gaullist Arab policy. He stated: "There is a trend that goes way back, this is called the Arab policy of France and it is not acceptable that the government have an ideology. There is a recruitment problem at the Quai d’Orsay and at the ENA and this recruitment should be reorganized."
• In 2006, he took a stand against President Ahmadinejad who invited rabbis and historians, including Holocaust deniers, to Tehran. It feins ignorance about the direction of the conference, which was to show that Europeans had replaced their Christian culture with the religion of the Holocaust. And against the grain, he explained that the Iranian president intended to deny the right of Israel to exist and was poised to continue the Holocaust.
• He mobilized for the release of Israeli soldier Gilad Shalit, on the grounds that he had French dual citizenship. No matter that the young man was captured while serving in an army of occupation at war against the Palestinian Authority, also an ally of France.
• In 2010, he, along with Bertrand Delanoe and Bernard-Henri Lévy, published an open forum in Le Monde to oppose the boycott of Israeli products. According to him, the boycott would amount to collective punishment imposed also on Israelis working for peace with the Palestinians. This is a line of reasoning that he had not held during the similar campaign against apartheid in South Africa.

Finally, before the Franco-Saudi rapprochement and even before being President, François Hollande had already expressed his support for the Israeli colonial state. And he had already condemned the Axis of Resistance (Iran , Syria, Hezbollah). The truth is thus the opposite: applying the Quincy Agreement, Saudi Arabia became closer to France because of its pro-Israel policy.

The policy of the Socialist Party in general and that of François Hollande in particular has its roots in nineteenth century colonialism, of which Jules Ferry was a herald and Theodor Herzl a promoter. Today , Zionists in the party have come together at the initiative of Dominique Strauss-Kahn in the discrete and powerful Léon Blum Circle... whose honorary president, Jean- Marc Ayrault has become Francois Hollande’s Prime Minister.