Declaration of the "Friends of Syria" 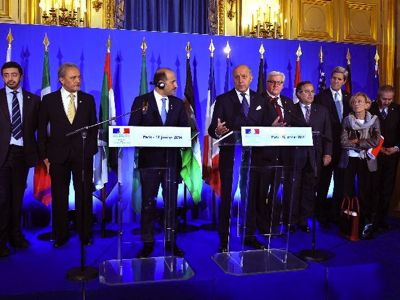 We, the Foreign Ministers of Egypt, France, Germany, Italy, Jordan, Qatar, Saudi Arabia, Turkey, the United Arab Emirates, the United Kingdom and the United States, met today in Paris with a delegation of the Syrian National Coalition led by its president Ahmad al-Jarba, and adopted the following Core Group declaration:

1. We support the rights of the Syrian people to determine its own destiny and to defend itself against oppression. The Geneva II Conference, based on the full implementation of the Geneva Communiqué, is aiming at allowing the Syrian people to control its future and put an end to the current despotic regime through a genuine political transition.

2. We condemn in the strongest terms the atrocities committed on a daily basis by the regime against its own people, with the support of Hezbollah and other foreign groups. We express outrage notably at the intensive use of “barrel bombs” against the population of the city of Aleppo, which have left over 700 dead and 3,000 injured since December 15, and in several other locations throughout Syria. We are revolted by the “starve or surrender” strategy used by the regime, which in particular deprives of food and medicine more than 200,000 people in the suburbs of Damascus and in the old city of Homs. We recall that any strategy to starve civilians constitutes a war crime. The international community should not be expected to tolerate the continuation of such crimes.

3. The increased fuelling, by the regime, of the suffering of the Syrian people gravely undermines the prospect of success of the Geneva II Conference. The regime must fulfill its obligations set out by UN Security Council Resolutions 2042 and 2043 which it formally accepted and, in particular, must immediately put an end to its indiscriminate attacks against civilians and release all arbitrarily detained persons. It must allow immediate and unfettered humanitarian access to the entirety of the Syrian territory, through cross line and cross border operations. We urge Russia and Iran to use all their influence on the regime to act accordingly. We deplore that the UN Security Council could not express itself since the 2 October Presidential Statement. Considering that the situation is still deteriorating, we call for a humanitarian resolution from the UN Security Council.

4. We reiterate our conviction that the only solution to the conflict is a genuine political transition, based on the full implementation of the Geneva Communiqué, and preserving the sovereignty, independence, unity and territorial integrity of the Syrian State.

5. We welcome the invitation sent by the UN Secretary General, which convenes the parties to a Geneva II Conference to fully implement the Geneva Communiqué, with the priority aim of forming, by mutual consent, a transitional governing body (TGB) with full executive powers. We recall that the invitation clearly states that participating in the Conference will be taken as a commitment to this aim.

6. We therefore strongly condemn the latest statements of the regime, by which it refused to come to Geneva to establish a political transition. These statements fully contradict the Geneva Communiqué, endorsed by the UN Security Council Resolution 2118, to which the regime must commit. In addition, the perspective of a presidential election organized by the regime, in which Bashar al-Assad would run, also fully contradicts the Geneva II process and its goal of a negotiated democratic transition. Such a parody of a ballot, aimed at maintaining in power a man whom the UN considers committed war crimes and crimes against humanity, would only fuel the conflict and increase the threat of a partition of the country. If it were to happen, we would consider it totally null and void.

7. We reaffirm our full commitment to the text of the Core Group Ministerial Communiqué of 22October 2013. Negotiations to form the TGB, under the mediation of the Joint Special Representative, must start as early as January 24 and must not be open-ended. The Geneva II process must lead to tangible and immediate benefits to the Syrian people. During the course of negotiations, all parties must put an end to the use of heavy weapons and implement humanitarian pauses. As of the establishment of the TGB, all parties must cooperate with the TGB in ensuring the permanent cessation of violence throughout the country. Consistent with the Geneva Communiqué, once the TGB is established, with control over all governmental institutions, as specified in the UNSG invitation letter, including the armed forces, security services and intelligence structures, Assad and his close associates with blood on their hands will have no role in Syria.

8. All those who committed war crimes or crimes against humanity must be held accountable. We reaffirm our support to international criminal justice mechanisms to achieve reconciliation, truth and accountability for gross violations, as well as effective remedies and reparations for victims.

9. We urge the National Coalition to respond positively to the invitation to set up the Syrian opposition delegation sent by the UN Secretary General. We invite them to form, as soon as possible, a delegation of opposition forces to participate in the political process starting on January 22. As the legitimate representative of the Syrian people, the National Coalition should establish a delegation reflecting the diversity of the Syrian society and be gender balanced. We pledge our full backing to the opposition during the Geneva II Conference.

10. We strongly support the vision envisaged by the National Covenant adopted in Cairo paving the way for a democratic and pluralistic Syria.

11. We welcome the Kuwaiti initiative to host the Second International Humanitarian Pledging Conference for Syria on 15 January. We call on all countries to mobilize financial resources to respond to the needs inside Syria, including in the liberated, contested and besieged areas, and in the countries of the region generously hosting a growing number of refugees. We recognize the enormous social, economic and financial impact these refugees have on their societies, and call upon the international community to assume its responsibility through burden sharing. We also welcome the UNHCR and neighboring country meeting to be held in Urfa – Turkey – on 17 January to highlight increasing pressure on host governments and communities, as a result of hosting more than 2,5 million refugees from Syria. We stress the importance of meeting the needs of the internally displaced persons concentrated in certain areas who seek refuge and protection. It is crucial to increase the level of humanitarian aid, especially in the liberated, contested and besieged areas, including by supporting the Interim Government and the Aid Coordination Unit of the National Coalition and local solidarity networks. We express our full support for the work being carried out by UN Under-Secretary General for Humanitarian Affairs, UNHCR, UN specialized agencies and all humanitarian actors to alleviate the suffering of the Syrian people, and underline the urgent need to achieve significant results.

12. All armed groups must respect democratic and pluralistic values, recognize the political authority of the National Coalition and accept the prospect of a democratic transition negotiated in Geneva on the basis of the objectives listed above. We urge them to facilitate humanitarian access and respect humanitarian principles, as well as the work of humanitarian actors and journalists. We also urge opposition armed groups aiming at a free and pluralistic Syria to unify and ensure the security of the civilians in the areas under their control, including against the violations committed by extremist groups.

13. We condemn the presence of foreign fighters in Syria, both those fighting with the regime such as Hezbollah and other Iranian backed forces, and those fighting within other extremist groups. We demand their immediate withdrawal. It is important that countries supporting and encouraging these groups stop doing it, and that all groups respect the sovereignty and territorial integrity of Syria. We also urge the international community to consider political and economic steps to impel Hezbollah military wing, a terrorist organization, and other Iranian-backed armed groups to withdraw from Syria.

14. We fully support the Supreme Military Council of the Free Syrian Army and other democratic opposition forces in their action against the Islamic State of Iraq and the Levant (ISIL). Extremist groups play in favor of the regime, damage the image of the democratic and legitimate Syrian opposition forces, and deprive them of local and international sympathy and support. We urge the democratic opposition forces to keep opposing the groups affiliated with Al-Qaeda. We share growing concern at the spread of extremist groups, including ISIL and Jabhat al-Nusra. The regime, contrary to what it claims, does not take any significant measures to fight extremism. On the contrary, it is fueling this threat by facilitating its development to exhaust the democratic opposition. The determination of Bashar al-Assad to cling to power and the regime’s brutality are the roots of extremism in Syria. As long as Bashar al-Assad remains in power, there is no prospect of peace and stability in Syria and the region. Only when the Syrian people control its future will there be a prospect of peace and stability in Syria.