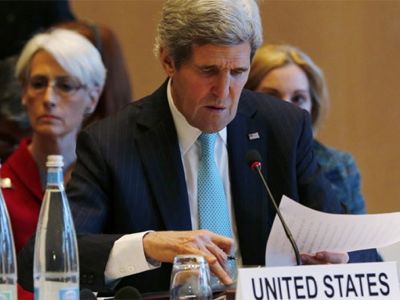 Thank you very much, Secretary Ban, and thank you, Ambassador Brahimi, for your commitment to helping the Syrian people find a new future. And I join with Foreign Minister Lavrov in thanking all of the countries around the table, all of the groups around the table. I thank President Burkhalter and the people of Switzerland for making this important meeting possible. And I thank the Russian Federation and Foreign Minister Lavrov for his cooperation and efforts together with us, working to try to initiate this process. I also want to welcome the leaders of the Syrian opposition, and I thank them for the courageous decision they’ve made. Everybody here knows the pressures that have existed.

Today is a beginning. It’s a beginning of what will obviously be a tough and complicated negotiation; peace talks to end a war and to end a struggle like this always are tough. Frankly, this is a test for all of us who support the Syrian people in their effort to end the extraordinary suffering that the world has witnessed, and which continues. And it is a test of the global community’s ability to come together and ultimately secure a Syria where people can live in dignity and not in fear.

I want to start by saying that I think it is impressive, I think it is significant in and of itself, that so many countries have come together, even though we know it’s for one day that all the countries will be here in this forum. But all of them have come together because everybody understands how critical it is for the world to prove that we have the ability to make a difference in this kind of a conflict.

Now, lost in the daily reports of violence is the fact that this revolution did not begin as an armed resistance. This started peacefully. It was started by schoolboys in Daraa who are armed only with graffiti cans, citizens who were peacefully and legitimately calling for change. And they were met almost immediately with violence. When their parents came out to protest the arrest of the children, 120 people died. That was the beginning.

And tragically, the Assad regime answered peaceful demonstration after peaceful demonstration with ever-increasing force. In the three years since then, this conflict has now left more than 130,000 dead, and it’s hard to count accurately. We all know that. The fact is that these people have been killed by guns, by tanks, by artillery, by gas, by barrel bombs, by Scud missiles. They’ve been killed by weapons almost exclusively of the magnitude not possessed by the opposition. Starvation has been used as a weapon of war. And most recently, we have seen horrific reports of systematic torture and execution of thousands of prisoners. This is an appalling assault, not only on human lives, but on human dignity and on every standard by which the international community tries to organize itself, recognizing the horrors of the humanitarian catastrophe that has unfolded, the destabilization of neighboring countries, and the endless exile of refugees.

Now, we need to deal with reality here. We really need to deal with reality. Mutual consent, which is what has brought us here, for a transition government means that that government cannot be formed with someone that is objected to by one side or the other. That means that Bashar Assad will not be part of that transition government. There is no way – no way possible in the imagination – that the man who has led the brutal response to his own people could regain the legitimacy to govern. One man and those who have supported him can no longer hold an entire nation and a region hostage. The right to lead a country does not come from torture, nor barrel bombs, nor Scud missiles. It comes from the consent of the people. And it’s hard to imagine how that consent could be forthcoming at this point in time.

So just as there could be no place for the perpetrator of this violence, there could also be no place for the thousands of violent extremists who spread their hateful ideology and worsen the suffering of the Syrian people. And as we hear talk about terrorism today, make no mistake: It is the presence of the current intransigence within the existing government that makes this problem worse. That is creating a magnet for terrorists. And until a transition takes place, there is no prayer of reducing the increase of terrorism.

There is another way forward. We all know it. It is what this conference is organized around. It is the Geneva communiqué, which has the support of the international community as a peaceful roadmap for transition. And the only thing standing in its way is the stubborn clinging to power of one man, one family. I believe the alternative vision of the Syrian people is one that can gather the respect and support of people all around the world. It is a place that doesn’t force people to flee or live in fear, a Syria that protects the rights of every group. We have not only an opportunity, but we have an obligation to find a way forward so that the people of Syria can choose their leadership, know peace, and for 9 million refugees, finally be able to return home in dignity.

My final comment is this: There are, in this room, all of the players who have the ability, with the exception of one or two, to have an impact on the choices that are made here. People who are supporting different groups are here. These people have the ability to affect the outcome. And if we put our common energies together, we can forge a resolution that can provide peace to the region and peace to the people of Syria. And I hope we will succeed.

John Kerry’s Remarks at the Chicago Council on Global Affairs

Remarks by John Kerry at the Carnegie Endowment for International Peace