Who are the Nazis in the Ukrainian government?

The Ukrainian government installed by the coup has been recognized by the Western powers. It includes several members of explicitly Nazi organizations, including two leaders who have distinguished themselves by fabricating false images of violence and torture aimed to convince Western public opinion of the cruelty of the democratically elected president, Viktor Yanukovych. The Deputy Secretary of the National Security and Defence Council of Ukraine openly acknowledges his ties with Al-Qaeda.

The coup organized by the CIA in Kiev brought to power a government representing the oligarchs and extremist groups. Its members comprise several Nazi leaders. This is the first time since the Second World War that politicians referring directly to the Third Reich have come to power in Europe.

Two of its members claim to have links with the Islamic Emirate of the North Caucasus, an organization affiliated with al-Qaeda, according to the United Nations. One of them has left to fight against Russia within this context.

Three other members were involved in propaganda operations, posturing as victims of the democratic regime of Viktor Yanukovych.

Andriy Parubiy (Андрій Парубій)
Secretary of the National Security and Defense Council (body which presides over the Ministry of Defence and the Armed Forces).
Founded the Social-National Party of Ukraine together with Oleh Tyahnybok [1]. 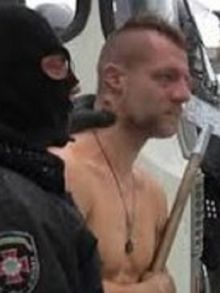 Dmytro Yarosh (Дмитро Ярош)
Deputy Secretary of the National Security and Defence Council (body which presides over the Ministry of Defence and the Armed Forces).
Leader of Stepan Bandera Treezoob and the Right Sector coalition.
Yarosh fought alongside Chechen Islamists. On 1 March 2014, he turned for help to the emir of the North Caucasus, Dokka Umarov (Доку Умаров), considered by the United Nations to be a member of Al-Qaeda.
In the fake video directed by Andriy Kozhemyakin with Andrei Dubovik playing the role of bad cop, he portrayed the poor naked activist being roughed up in the snow [2]. 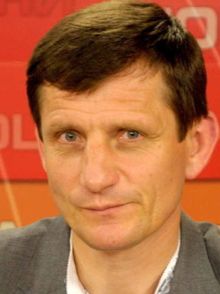 Ihor Tenyukh (Игорь Тенюх)
Minister of Defense
Although his formal membership in the Freedom Party (Svoboda / Свобода) is not certain, he participates in their meetings. Trained in the United States, he directed joint Ukraine/NATO maneuvers. During the war in Georgia (2008), he organized the siege of Sevastopol and was promoted vice admiral of the fleet. His appointment as defense minister prompted the Ukrainian Navy not to recognize the new government and to fly the Russian flag. 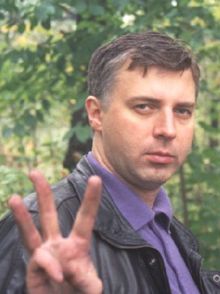 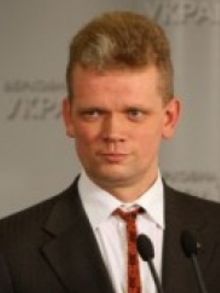 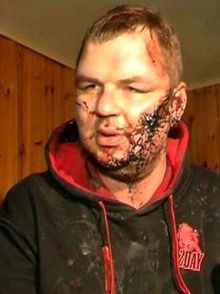 Dmytro Boulatov (Дмитрий Булатов)
Ministry of Youth and Sports
Member of the Ukrainian National Self-Defence (UNA-UNSO)
He alleged to have been kidnapped, sequestered and horribly tortured from 22 to 31 January 2014. He claims to have gone to Germany for treatment without meeting any journalists. However, Foreign Minister Leonid Kojara attested that the man was in good shape and that the whole thing had been staged. The fact remains that he turned up a month later as fit as a fiddle.

Source : “Who are the Nazis in the Ukrainian government?”, by Thierry Meyssan, Voltaire Network, 3 March 2014, www.voltairenet.org/article182428.html

Source : “Who are the Nazis in the Ukrainian government?”, by Thierry Meyssan, Voltaire Network, 3 March 2014, www.voltairenet.org/article182428.html