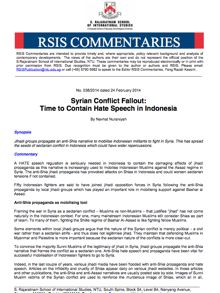 The propaganda of Indonesian groups hostile to the Syrian government highlights the supposed Shia character of the Assad regime. The point is to legitimize "jihad" by painting Shi’ism not only as a heresy, but also as a threat to pure Islam. This rhetoric has notably prompted Abu Bakar Ba’asyir to brand the "Shiite regime in Syria" as being "worse than infidels and Jews."

For Navhat Nuraniyah of the S. Rajaratnam School of International Studies, this propaganda has already yielded evil fruits: in 2011, a plot was in the works to target Indonesian Shia figures and institutions; in 2012, a thousand villagers attacked a Shiite community on the island of Madura; a Sunni mob attacked a school in East Java.

While fifty Indonesians are deemed to be currently fighting in Syria, Indonesia should adopt a law criminalizing hate speech before they have the chance jeopardize social peace.

The Story of Obama: All in the Company (Part II)
Special Report