In the globalized world, every conflict is linked to the others. So what is happening now in Ukraine is reflected in other regions. For Thierry Meyssan, Washington’s rantings are not intended to make war with Moscow, but to urge Europeans to cut off their arm to the greatest US advantage. Similarly, the abandonment of the Geneva process can be a way to sidestep Saudi interests and focus on a settlement in Palestine. 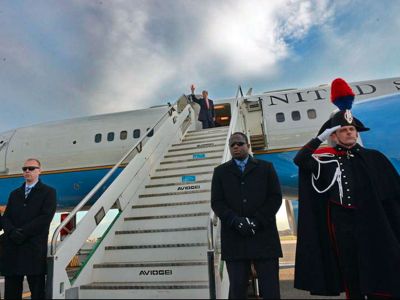 Secretary of State John Kerry (here during his stopover in Rome) has no predefined policy. He takes the initiative on all subjects, not to achieve decisive victories, but to find opportunities to advance his pawns. Thus, having supported the the CIA coup in Ukraine, he is now not concerned about the future of the Crimea, but how his overall economic plan can benefit from his local political defeat.

Three events have upset the international scene : on the one hand, the crisis between the West and Russia over Ukraine, on the other hand, the secret war that the Gulf states have declared against each other, finally the adoption by the Council of the Syrian people of an electoral law which de facto excludes the candidacies of citizens who fled the country during the war.

The United States had planned a fourth event, a "color revolution" in Venezuela, but the opposition has failed to rally popular support. It will play this card later.

The crisis in Ukraine was prepared and implemented by the West. It took the form of a coup against the background of TV violence. Russia responded with skill, following the strategy of Sun Tzu, taking the Crimea without a fight and leaving the country’s economic and political problems to its opponents. Despite the rantings of Brussels and Washington, Westerners will not take a second shot and will not impose any significant economic sanctions against Moscow : The EU exports 7 % of its production to Russia (123 billion euros in machine tools, automobiles, chemicals ...) and imports 12% of its goods (mainly hydrocarbons EUR 215 billion). The United Kingdom, Germany, Italy, the Netherlands, Poland and France would be particularly affected. Citibank is largely financed by Russian assets that are beginning to evaporate, as shown by an internal memo from Downing Street photographed by the British press. Companies such as BP, Shell, Eni, Volkswagen, Continental, Siemens, Deutsche Telecom, Reiffsen, Unicredit and certainly many others - would go under. In the United States, the situation is better, but some multinationals, such as the second largest company in the country, Exxon, have substantial assets in Russia.

Anyway, Washington uses very strong language that will require it to react. Everything is happening as though the coup had been prepared by the radicals of the regime (Victoria Nuland, John McCain ... ) and had initially embarrassed President Obama, but it offered an unexpected opportunity to resolve his economic crisis at the expense of his allies : the unrest in Ukraine, if it spreads to economic or policy scenes in Europe, will push capital currently based on the old continent to Wall Street. This would be the application of both the 1992 Wolfowitz doctrine (prevent the EU from becoming a potential competitor of the United States) and the theory of Christina Romer, 2009 (save the U.S. economy by absorption European capital as at the end of the 1929 crisis). That is why we should expect a suspension of diplomatic relations between Washington and Moscow, ostensibly at least, and a sharp recession in Europe in 2014.

Under these conditions, it is not clear how a general agreement for peace in the Middle East could be implemented, at a time when each piece of the board was about to fall into place. As of now, the Geneva 3 project for Syria is suspended indefinitely. Meanwhile, the Israeli-Palestinian "peace", which had advanced with the return of Mohamed Dahlan, was torpedoed by the Arab League which opposes ­ for the time being - recognition of Israel as a "Jewish state ."

Another new element : the secret war that the Gulf States are now waging amongst themselves. Qatar supported an attempted coup of the Muslim Brotherhood in the UAE in November. The UAE, Saudi Arabia and Bahrain recently suspended diplomatic relations with Qatar and the Saudis sponsored a bombing in Doha. Qatar does not seem ready to give up on the Muslim Brotherhood for which Washington had organized the "Arab Spring" before dropping it.

The policies of the Gulf States have become an unlikely bag of knots insofar as operetta monarchs mix their state interests with their personal ambitions and worldly affinities. Forgotten are the anathemas between the Servant-of-the-Two-Holy-Mosques and the Guide of the Iranian Revolution, who negotiate their reconciliation, the quarrel of the day revolves around the Muslim Brotherhood, considered not as an ideological movement, but as a playing card.

Syria no longer wants to negotiate peace with the Saudis

The third new element is the deliberation, televised by the People’s Council (Parliament) of the next Syrian election law. MEPs finally adopted a provision stating that candidates for President must have lived in the country for the past ten years. This provision de facto excludes citizens who fled Syria during the war.

The Special Envoy of the Secretaries General of the Arab League and the UN, Lakhdar Brahimi, immediately declared that this choice might terminate the process of a negotiated resolution of the conflict. France has submitted a draft statement to the Security Council to revive the Geneva process . Although there is no mention of the new electoral law, this is the last Western attempt to consider war in Syria as a "revolution" and to consider peace as an agreement between Damascus and a dummy opposition entirely in the hands of Saudi Arabia. The former spokesman for the Syrian National Council, Basma Kodmani , who was kidnapped in a Saudi embassy, assured that the "Damascus regime" would not be able to hold the presidential election and proposed to consider this failure in time of war as proof that it is a dictatorship. NATO could thus return to the front of the stage and finish with Bashar al-Assad as planned since 2003 and this despite the missed opportunities represented by the "massacres" of 2011 and the "chemical bombardment" of 2013. However, after being reconciled with Riyadh , organizing Geneva 2 at its own discretion, Washington is losing interest anew in the Saudis¹ Syrian collaborators.

If there is no Geneva 3, the West will either attack Syria (which is no more possible than to take the Crimea, as we have already seen this summer), or let the situation rot for a decade, or even to claim that the "Revolution" was co-opted by the jihadists and admit that the war is now a question of interest for global anti-terrorism.

John Kerry, who is more of a businessman than a diplomat, has no pre-established policy, just tactics. As usual, Washington will not choose one option over another, but will make every effort to favor an outcome that is preferable to it while pursuing other options, just in case. No longer able to negotiate with Russia, it will do so with the other military ally of Syria, Iran. For a year now, the State Department has held talks with the Islamic Republic, first secretly in Oman, and officially with the new President, Rohani. But things are colliding with the Khomeiniists who do not talk to imperialists, they fight them to the death. Given Iran’s internal contradictions, Washington has increased its advances and retreats, progressing less quickly than expected.

Though there is no urgency for the United States to resolve the Syrian issue, it is on the contrary vital to otherwise ensure the perpetuation of the Jewish settlement of Palestine. In this regard, Iran has again drawn the State Department’s attention to the influence that it can exert: on its orders, the Islamic Jihad abruptly bombarded the Israeli border. Tehran, which had been excluded from Geneva 2, has invited itself to something far more important : regional negotiations. In this state of mind, the U.S. Senate will hold a hearing on "Syria after Geneva² in ten days. The wording suggests that the extension of this "peace conference" has been ruled out. Senators will not hear experts from Israeli think tanks in Washington, as they usually do when it comes to the Middle East, but the file holder at the State Department , their best guerrilla strategist and one of their two leading experts on Iran.

Ultimately, regional "peace", if it should occur, can only be as imagined by John Kerry : sacrificing the Palestinian people rather than the Jewish colony. Hassan Nasrallah warned against this injustice, but who will oppose it now that the main Palestinian leaders have betrayed their constituents ?