De-escalation in Ukraine as seen by Joe Biden

The Vice-President of the United States, Joe Biden, travelled to Kiev to preach appeasement with Russia. Indeed, the pro-US coup government clearly lacks enough popular support to safeguard Washington’s interests. Moreover, his use of the term "de-escalation" smacks of a Freudian slip: he recognizes that the policy of the Obama administration has been geared so far towards escalation and that the time has come to reverse it. 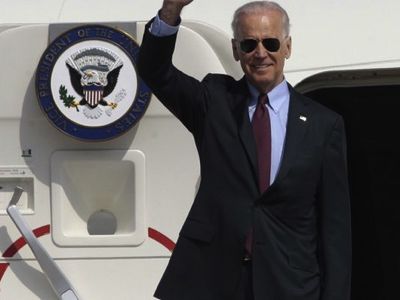 According to the White House statement, the Vice-President Joe Biden’s visit to Ukraine was to demonstrate the support of Ukraine by the United States. Washington realizes the interim government in Kiev is on the verge of collapse. But its fall would be tantamount to a defeat suffered by the United States. Biden landed in Kiev to make the US save face and define the ways to retreat if need be. Under the pretext of global commitments, the White House is focused on the local-scale mission to maintain power in Ukraine in the hands of its puppets… The country is in disarray; the plan to convert it into an anti-Russian springboard has failed. Here is another US global failure and Biden had to cover it up by statements calling for «defense of Ukraine’s unity and independence and the restoration of its national honor and pride». But the results of the visit tell a different story.

First, nobody has any doubts now that the imposters in Kiev fully depend on Washington. The crisis in Ukraine is spreading around to encompass the whole nation. The situation needs urgent measures to be taken. The Americans make another mistake trying to substitute the comprehensive management of the national crisis with the stated «de-escalation» in the East.

Second, it is becoming clear for Washington that the Kiev rulers cannot defend US interests in Ukraine as expected. The American influence spreads only on a limited number of individual Ukrainian politicians with rather low rating of popularity. The US frustration was demonstrated by the way the would-be election slated for May was discussed by the parties. No pre-election campaign is possible when the central powers have occupied the whole regions using force. The whole election process boiled down to a long list of candidates, but there is no one there the United States could rely on. How could a «democratic» victory be guaranteed when the majority of population has no wish to express its will at all? But Vice-President Biden told Kiev to go on with the mission.

Third, Biden should be remembered that he personally is responsible for the collapse of Ukraine’s statehood. By the end of January Biden urged Ukraine’s President Yanukovych to address the protesters’ legitimate concerns and protect democratic freedoms [1]. Biden said back then that violence by any side is unacceptable but only Ukraine’s government can ensure an end to the crisis. The Vice-President also told Yanukovych that more violence would have consequences for Ukraine’s relationship with the U.S., which is considering sanctions. There is a face-about now. He urges the new Kiev rulers to use force in Eastern Ukraine. Back in January Biden was calling for meeting the demands of peaceful demonstrators stressing the importance of dialogue with the opposition and the need to find a way out of the crisis on the basis of compromise. Now he wants the meetings banned in the East. According to him, the expression of people’s will shake the «foundation of democratic society». Only very naïve people cannot see how brazenly hypocritical he is.

Fourth, his remarks in the Verkhovna Rada (parliament) were unusually harsh [2]. Again he stressed that the Russia’s meddling into the internal affairs of Ukraine was unacceptable. Just a few days before the Crimea referendum Kerry threatened it by saying that «diplomatic means of crisis management could be exhausted soon». The US warnings have failed to produce the expected results. It’s time for the US administration to re-set the approach towards Russia.

Joe Biden shared his vision of the Russia’s place on the international arena with the Wall Street Journal in an interview [3]. According to him, the situation in the world is changing while Russia tries to stick to the shaky past risking to lose face and the imperial posture. Still he admitted that Washington was to act cautiously. He even cited his father who told him to never drive a man into a corner with no escape. He hit the nail right on the head. But Biden, Jr., is driving the United States into a dead end in Ukraine, the dead end that is far from leaving an opportunity to escape. There is nothing in concrete terms the Kiev’s curator could offer.

Fifth, speaking at a meeting with Ukrainian legislators, Mr. Biden said the United States supported Ukraine facing «humiliating threats». It’s evident he meant Russia. Still, many Ukrainian MPs who had no sympathy for Russia, found the economic aid offered by the United States to be embarrassing. The US is to provide an additional $50m for political and economic reforms in Ukraine, including $11m to help run the presidential election due on 25 May. And further $8m is being provided for non-lethal military assistance, such as bomb disposal equipment and radios. It’s nothing in comparison with what was allocated for the coup. Ukrainians are upset to be offered their share of crumbs from the master’s table. Kiev still remembers the total amount of economic aid it has received from Russia since the days of the Soviet Union’s collapse was around $250 billion [4].

Sixth, the visit showed that the United States is prone to discuss the fate of the country behind the scenes talking to illegal authorities. The blindness of Kiev is stunning. They look at the homeland through the prism of hostility towards Russia. The anti-Russia optics distorts the reality beyond recognition. The calls of the Vice-President to «stop talking and start acting» pursue the only goal – to make Ukraine finally collapse turning it into an America satellite threatening its neighbors. I mean not Russia alone, but all the neighbors.

America does not care about the opinion of European allies. It had not come into the Vice-President’s head to hold preliminary consultations with the European Union’s partners. One gets the impression he has never read the Geneva final statement on Ukraine signed by Europeans [5]. Biden warned Russia that further "provocative behavior" would lead to "greater isolation" looks too archaic, like something that has no relation to the recent diplomatic endeavors on the Ukraine’s crisis management. Talking about the «de-escalation» Biden continues attempts to make Kiev start a war against its own people.

[2] “Remarks by Vice President Joe Biden at a Meeting with Ukrainian Legislators”, The White House, April 22, 2014.

Associate Professor, senior research fellow at the Centre for Political and Military Studies.