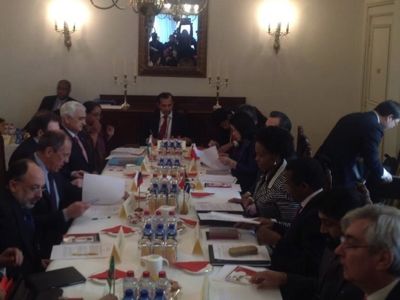 Chairperson’s Statement on the BRICS Foreign Ministers Meeting held on 24 March 2014 in The Hague, Netherlands

Minister Maite Nkoana-Mashabane convened a BRICS Foreign/International Relations Ministers’ meeting on Monday, 24 March 2014 on the margins of the Nuclear Security Summit in The Hague, Netherlands. The meeting was attended by Minister Sergey Lavrov of the Russian Federation, Minister Salman Khurshid of the Republic of India, Minister Wang Yi of the People’s Republic of China and Ambassador Carlos Antonio Paranhos, Under-Secretary General for Political Affairs of the Federative Republic of Brazil.

The Ministers recalled the outcome of the Sanya Declaration adopted at the 3rd BRICS Summit held in China, in April 2011, which articulated the fundamental principles that brought the BRICS countries together, namely:

"the overarching objective and strong-shared desire for peace, security, development and cooperation that brought together BRICS countries with the total population of nearly 3 billion from different continents. BRICS aims at contributing significantly to the development of humanity and establishing a more equitably and fair world."

The Declaration further noted that:

"we affirm that the BRICS and other emerging countries have played an important role in contributing to world peace, security and stability, boosting global economic growth, enhancing multilateralism and promoting greater democracy in international relations."

The BRICS Foreign/International Relations Ministers reflected on the political developments in their regions, as well as reviewed cooperation among BRICS countries following the comprehensive implementation of the eThekwini Action Plan.

The Ministers reflected that the role of governments in contemporary world politics should focus on pertinent areas where leadership is required, notably in finance, security, information and production.

The Ministers noted with concern, the recent media statement on the forthcoming G20 Summit to be held in Brisbane in November 2014. The custodianship of the G20 belongs to all Member States equally and no one Member State can unilaterally determine its nature and character.

They reflected on challenges to peace and security, notably the significant infringements of privacy and related rights in the wake of the cyber threats experienced, for which there is a need to address these implications in respect of national laws as well as in terms of international law.

They agreed that BRICS countries would continue to act as positive catalysts for inclusive change in the transformation process towards a new and more equitable global order. The BRICS agenda is not centered around any specific country or related issue and shares a common vision which drives it to also increasingly identify common areas for cooperation to assist with finding global solutions to global challenges.

BRICS countries agreed that the challenges that exist within the regions of the BRICS countries must be addressed within the fold of the United Nations in a calm and level- headed manner. The escalation of hostile language, sanctions and counter-sanctions, and force does not contribute to a sustainable and peaceful solution, according to international law, including the principles and purposes of the United Nations Charter.

The BRICS Foreign/International Relations Ministers wished the Federative Republic of Brazil well for the successful hosting of the FIFA World Cup and the hosting of the Sixth BRICS Summit.