Genocide in Novorossiya and swan song of Ukrainian statehood

The massacres that covered Odessa in blood on 2 May 2014, on the streets and inside the Trade Unions House, show the resolve of the Kiev coup authorities to impose a rule of anti-Russian terror. Far from reacting, NATO countries shrouded themselves in complicit silence. These events undermine the viability of the Ukrainian experience, and spell the inevitable demise of this artificial state.

The tragic events in Odessa, where neo-Nazi militants have burned alive at least 50 people, are already being called a new Khatyn. The parallels are so striking that this image instantly infiltrated the world’s consciousness. And the same perpetrators were responsible. The residents of Khatyn were incinerated by the 118th Nazi police battalion, made up of mostly Ukrainian military personnel from the Nachtigall and Roland police battalions under Abwehr command that were originally created with the assistance of Stepan Bandera. At the beginning of the war, Nachtigall was led by Roman Shukhevych, who later assigned his thugs to a new punitive unit. The residents of Odessa were killed in a fire set by a new generation of fascists who roam the streets of Ukrainian cities clutching portraits of Bandera and Shukhevych. 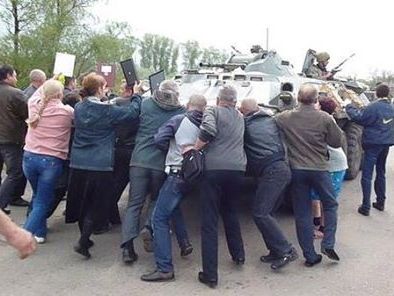 The Khatyn massacre in Odessa has created a new reality, in which Ukrainian citizens, whose only goal is to defend their language, way of life, and values, stand in opposition to the neo-Nazi junta in their own capital of Kiev. Unlike the Donbass, where there is an armed militia, the protests in Odessa were entirely peaceful. But the Rubicon was crossed in Odessa on May 2. The taboo against the killing of peaceful civilians by armed militants no longer exists. It is no coincidence that a few hours after the tragedy in Odessa, the National Guard began ruthlessly shooting the residents of Kramatorsk who were attempting to block armored vehicles by standing in their path. It’s possible that many of them did not even know what had happened in Odessa where their fellow Ukrainian citizens had been set ablaze right in front of the indifferent police forces while the neo-Nazis shouted, “Burn, Russians!” and “Death to the damn Russians!” and that those who escaped the fire were finished off with axes and clubs, all to the tune of the Ukrainian national anthem – a song that will now always be associated with the Khatyn in Odessa.

The latest information about the tragedy indicates that on May 2, the leaders of the junta staged a provocation and consequent punitive action against the citizens of Odessa, in order to reduce or utterly destroy the spirit of unrest there that could potentially lead to open resistance to the Banderite regime, as it had in Donetsk, Lugansk, and Slavyansk.

With this goal, fighters from the special task force Vostok (East) and Storm battalions, sponsored by Ukrainian multi-billionaire Ihor Kolomoysky, were brought into the city dressed in civilian garb. The so-called “14th company of Euromaidan Self-Defense Force” from Kiev, which had been actively involved in the riots in that city on April 29, was also involved. 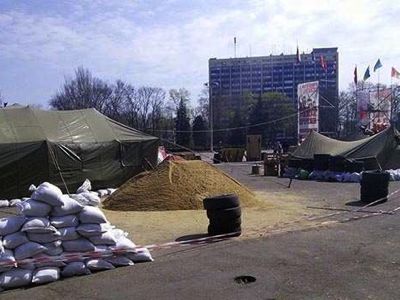 The tent camp of the Odessa residents opposing new illegal Ukrainian administration was gathered in the center of city in late February 2014 immediately after the coup d’état in Kiev. Over the next months dozens of thousands of citizens used to rally here in a desperate attempt to protect their basic rights and freedoms in emerging nationalistic Ukraine. 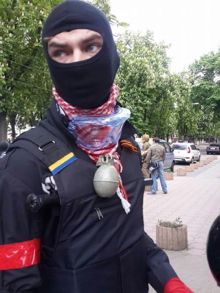 Strange combination of contradicting identifications (St.George ribbon and Ukrainian flag) on the bulletproof vest of a fighter on the street of Odessa. Take note of the red band.

On May 2, 2014 the local soccer club FC Chernomorets Odessa hosted FC Metallist from Kharkov in a regular match of the Ukrainian league. Crowds of soccer fans from Kharkov arrived to Odessa and were moving to the stadium. Suddenly they were attacked by unidentified masked gunmen wearing St. George ribbons (symbol of antifascist resistance to Kievan junta!!!) and red arm-bands. The same arm-bands were noted on the sleeves of some of the Ukrainian policemen.

Available photos reveal that these attackers enjoyed at least neutrality of the local police, while some others evidence that their actions were coordinated by people in police uniform. One of the identified coordinators was deputy chief of the Odessa Interior ministry branch Colonel Dmitry Fucheji. 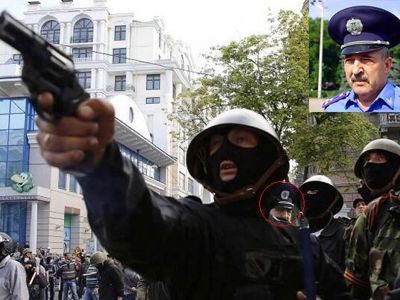 Masked gunmen wearing St.George ribbons (!) are coordinated by local police deputy commander Dmitry Fucheji (in the red circle). Next day he was rewarded by the Kievan administration. 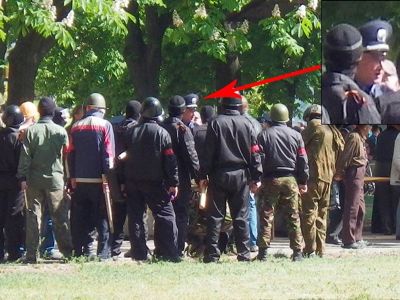 A group of men with red bands receive instructions from a person in police uniform, Odessa, May 2, 2014. 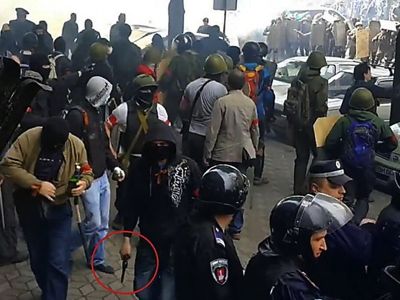 Masked gunmen are calmly walking by the local police officers. 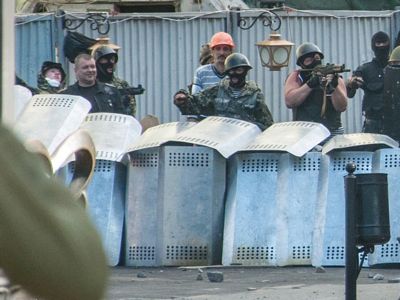 Gunmen shooting at the football fans. 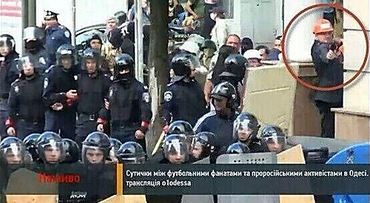 Odessa police pays no attention to man shooting at the football fans.

No wonder that the infuriated fans immediately moved in trying to reach the assailants. They crushed everything on their way. After a short “resistance” police pulls back and lets the furious crowd to Kulikovo field, the base of peaceful anti-fascist protest in Odessa.

At that point football fans were joined by the ultranationalist Right Sector thugs who surrended the Trade Unions building, where the majority of anti-fascist protesters escaped, rushed in killing everyone on their way and then setting the building on fire by the Molotov cocktails.

As a result, during the clashes and the fire at the House of Trade Unions, at least 116 people were killed and over 200 were injured and crippled, more than 20 are in critical condition. Eight people died after leaping from the upper floors of the building. There are latest reports that the thugs used a toxic gas to neutralize people inside the building. A shocking photo report on atrocities committed by the Right Sector inside the Trade Unions House is available here (Caution: strictly 18+). The victims who survived and were pulled from the blaze were killed on the spot and then photographed against a backdrop of burned corpses with signs reading, “This is Ukraine.” odessa6The worst of the shocking footage out of Odessa is not even the photos of the charred corpses in the House of Trade Unions, but rather the video of frenzied neofascists hacking off a young man’s leg right in the middle of the street (9:00 onwards). They did not hide their pleasure at the sound of the victim’s screams and the crunch of bones, as they slathered their hands in his blood with cries of exultation. These are no longer human beings, these are NON-HUMANS. Yes, if “Ukraine” now consists of animals like this, then the country it once was truly no longer exists. 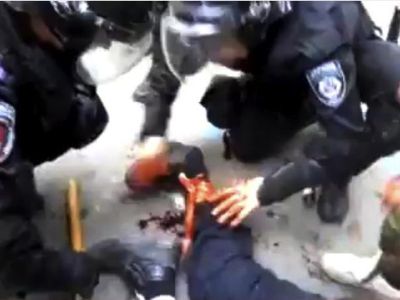 It is already clear that the junta has failed to achieve its goals. The citizens of Odessa have now decided to move from peaceful protests to guerrilla attacks. And they are right to do so – the residents of the occupied territories have no other way to prove anything to the fascists there – this was true even during WWII.

Instead of extinguishing the flames of this smoldering civil war in Ukraine, the junta has thrown gasoline on it.

The supporters of a federalized country have been incinerated – beyond this brink there is no longer any possibility of Ukraine continuing to exist within its current borders.

Of course the West is interested in establishing a neo-Nazi Ukrainian state on the border with Russia. The only question is about the perimeters of this state, and this involves more than just its boundary with Russia, since obviously neither the Romanians, Hungarians, or Poles will be pleased to find themselves saddled with such a neighbor.

What conclusions can be drawn after the tragedy in Odessa?

First, the provocation committed by the Right Sector-linked gunmen with the red arm-bands agaisnt visiting football fans was carried out with the assistance of local police, loyal to Kievan authorities.

Second, there can no longer be any question about whether the people of Crimea made the correct decision about reuniting with Russia. Several million people there were given a promise of security, prosperity, and a clear, straightforward, and comprehensible vision of their new lives as Russian citizens.

Third, the Southeast will never consent to living under a single government with fascists. The flames in Odessa signaled the cremation of not only the Geneva Agreement, but also the idea of federalizing the country of Ukraine.

Fourth, the decision made by the leaders of the Donetsk People’s Republic to go ahead and distribute weapons to the public in advance can now been seen as entirely sound, because the junta in Odessa has shown it has no intension of conducting any sort of dialog with the southeastern regions, and that it is ready to kill and burn anyone who thinks differently.

Fifth, the leaders in Russia now have the option of postponing all decisions about whether to deploy troops to rescue the ethnic Russians there, since the militia forces are now able to manage the junta’s troops on their own. Russia’s task will be to provide humanitarian assistance to the southeastern regions of Novorossiya, where there will be great need, given the widespread hunger and destruction.

Sixth, any presidential election would be out of the question amidst this civil war in Ukraine. Thus, the junta cannot hope for any sort of legitimacy after May 25, despite all the speeches made by Obama and Merkel.

On the same day we saw a demonstration of exactly how Russians differ from those who call themselves Ukrainians. Ethnic Russians in Lugansk shot down one of the junta’s helicopters, but the Ukrainian soldiers who responded to its distress signal from the wounded pilot arrived just to take his gun and leave him to die! It was the local Russian-speaking militia forces who took him to the local hospital, where doctors saved the life of the very man who was about to kill them.