Kurdistan and the Caliphate

In a few weeks, two entities to which few people gave a future are taking shape: Kurdistan and the Caliphate. Thierry Meyssan’s analysis indicating these two entities are being propelled by Washington is confirmed by events. He examines the latest developments. 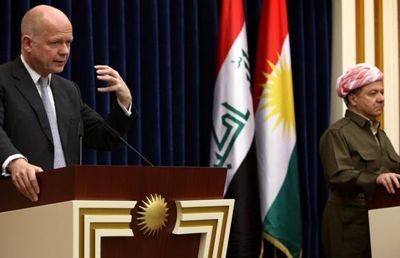 Starting with the fall of Mosul, I stated that the current war in Iraq should not be interpreted as an action by the Islamic State of Iraq and the Levant, but as a combined jihadists and local Kurdish government offensive to implement the US map for remodeling the country. [1] I was quite alone and this view went against the current. Three weeks later, it has become evident.

The Creation of Kurdistan

On June 20, Israel bought the oil that the local Kurdish government had stolen in Kirkuk despite the international opinion voiced by the Iraqi federal government. [2] The transit of the oil had been facilitated by the ISIL which controls the pipeline and Turkey which allowed the goods to be loaded onto a tanker at the port of Ceyhan.

On June 25th, the Kurdish political parties in Iraq put aside their differences and formed a local union government. Until then, they were divided between two large coalitions, one pro-Turkish and pro-Israel led by the Kurdistan Democratic Party (KDP) of Barzani and the other pro-Iranian and pro-Syrian, led by patriotic Union of Kurdistan (PUK) of Talabani. The union between these two factions would not have been possible without a prior agreement between Tel Aviv, Washington and Tehran.

Mendi Safadi, a Druze politician who liaises between Israel and the Contras in Syria, transmitted a letter from the Kurdish Left Party in Syria to Reuven Rivlin to congratulate him on his election by the Knesset and to call upon him to support the creation of an independent Kurdistan, straddling Syria and Iraq.

On the 26th and 27th of June, the British Foreign Minister, William Hague, visited Baghdad and Erbil. As agreed, he called Prime Minister Nouri al-Maliki to form an inclusive government, knowing he would not do so. This stylistic exercise brought a smile the lips of the London press for which his counsel came "a little late". [3] Then he discussed the future independence of Kurdistan with Massoud Barzani. As usual, the passage of the British is a decisive moment.

On the 29th of June, Israeli Prime Minister Benjamin Netanyahu broke the taboo: he announced that Israel supported the creation of an independent Kurdish state in a speech at the Institute for National Security Studies of the University of Tel Aviv. Cautiously, he refrained from specifying the boundaries that can always evolve over time [4].

On July 3rd, the President of the local government of Kurdistan, Massoud Barzani, called his parliament to hold a referendum on self-determination. Not surprisingly, the White House responded publicly reiterating his support for "a democratic Iraq, pluralistic and united" while Vice President Joe Biden privately hosted Fouad Hussein, Mr Barzani’s cabinet chief, to finalise the referendum.

It does not appear that the PDK (a majority in Iraq but a minority in Syria) is capable of holding the referendum simultaneously in both countries. Washington will be satisfied with a separate modern Iraq and Kurdistan, postponing to a later date the partition of Syria and Turkey. For the time being, the US reproduces soothing messages for Damascus (with which it is once again on speaking terms) and Ankara who doesn’t believe a word of it.

The question everyone is asking is what will be the foreign policy of this new State? So far, the Barzani had succeeded in creating an island of prosperity, but were aligned with Israel. If this option were to persist, it would completely change strategic relationships in the region.

The Spectre of the Caliphate

Meanwhile, the Islamic State of Irak and the Levant (renamed Islamic Emirate) proclaimed the Caliphate. In a long, lyrical text, peppered with quotations from the Koran, it announced that, given its ability to impose Sharia in the vast territory under its control in Syria and Iraq, the time for the Caliphate had come. It announced that its chief elected Caliph, Abu Bakr al-Baghdadi, and every believer, wherever he is, has the duty to submit. [5] No photograph of the new head of state has been released, nobody knowing if al-Bagdhadi really exists or if the name of "Caliph Ibrahim" is just a scarecrow.

Though the seizure of northern Iraq has been welcomed by some of the Muslim world, we doubt that this claim to govern the whole has been appreciated in a general sense.

Al-Qaeda in the Islamic Maghreb (AQIM) has supported "the heroes of the Islamic Emirate." While Al-Qaeda in the Arabian Peninsula (AQAP) has sent its best wishes for success and victories. Others affiliated with Al-Qaeda groups such as Boko Haram in Nigeria and the Shabaab in Somalia should demonstrate their allegiance shortly. So we would be witnessing an Al Qaeda mutation from status as an international terrorist network to that of an unrecognized State.

Be that as it may, the IE continues its progression cautiously. It knows how to fight within certain limits and is careful not to offend the interests of Washington and its allies, including those who are of consequence. Thus, in Samarra, it carefully avoided attacking the mausoleums of Shiite Imams so as not to provoke Iran.

Henceforth, many voices in Washington rise up to confirm the remodeling of Iraq. Thus, Michael Hayden, former director of the NSA and CIA, renders the following verdict on Fox News: "With the conquest by the insurgents of the major part of Sunni territory, Iraq has virtually ceased to exist. Partition is inevitable." His statements are accompanied by calls for intervention. The former adviser to George Bush, then Barack Obama’s ambassador to Iraq, James Jeffrey said: "[The Jihadists] have never let up, even when I was there in 2010 and 2011. They were totally defeated and they lost their population. We were on their heels and the did not rise up. There is no way to reason with them, no way to contain them, you must kill them."

The Atlanticist press interprets these positions as a debate between supporters of the division of Iraq and supporters of its unity by force. In fact, the Washington program could not be clearer: first let the jihadists partition Iraq (and possibly Saudi Arabia), then crush them once their job is done.

In this perspective, President Obama consults and drags on. In violation of Iraqi-US defense agreements, he has dispatched only 800 men, of which only 300 are to mentor Iraqi forces, the others being assigned to protect his embassy.