European governments most hypocritically claim that the mandate given to the European Commission to negotiate a transatlantic trade and investment partnership agreement with Washington falls within European law. Actually as with previous agreements such as Swift, data related to air passengers, and to tax evasion, the Commission has been told to suspend the application of European law when negotiating with the US. Consequently negotiations amount to deciding the areas in which Europeans will no longer be protected by their respectives States. 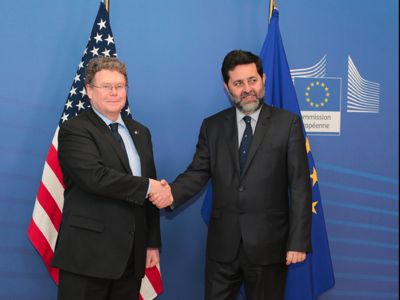 Top US and EU officials conducting TTIP negotiations which are kept secret from the public: Dan Mullaney (left) and Ignacio Garcia Bercero.

Belgium and the United States have signed an agreement looking to enforce a U.S. law in Belgium fighting against tax fraud; the Foreign Account Tax Compliance Act (FATCA). The signing of the agreement took place on 23 April. Several countries, such as the United Kingdom, France, Germany and Japan have signed an agreement with the USA, applying the law on their soil. From 1 January 2015, financial institutions will have to report to U.S. authorities the transactions of any account held by a U.S. citizen. When the amount exceeds $ 50,000, or a number of transactions take place with the U.S, the bank must make an accurate report of the transactions in and out of the account. If a bank fails to comply with this procedure, all its activities in the U.S. will be surcharged at 30%. The penalty may extend to withdrawal of the banking license in the United States. 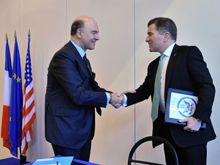 November 14, 2013: Pierre Moscovici, French Minister of Economy and Finance, and Charles Rivkin, U.S. Ambassador in France, ratify the implementation in France of FATCA, a United States federal law. The European Union did not adopt a similar measure until six months later.

These agreements signed by member countries of the EU with the U.S. administration are in breach of national laws for the protection of personal data, and Directive 95/46/EC of the European Parliament and of the Council of 24 October 1995 "On the protection of individuals with regard to the processing of personal data and on the free movement of such data", directive integrated into national law of all member states. The application of FATCA on the soil of the old continent violates the national law of European countries and the EU law. These laws have not been erased, but suspended. They will not be taken into account in relations with the United States.

Previous agreements legalizing the seizure by U.S. authorities of European citizens’ data were just as successful. Since the attacks of September 11, 2001, Swift, an American Belgian company had clandestinely sent to the U.S. Treasury Department tens of millions of pieces of confidential data concerning its customers’ financial transactions. Despite the blatant violation of human rights, European and Belgian, this data capture has never been questioned. Instead, the EU and the U.S. have signed several agreements to legitimize it [1] .

Swift was subject to Belgian law and that of the European community, because of the location of its headquarters in La Hulpe. This company was also subject to U.S. law because of the location of the second server on United States territory, allowing the U.S. government to directly capture data. Thus, the company has chosen to violate European law, to submit to the dictates of the U.S. executive. However, since late 2009, Swift inter-European data have no longer been transferred to the United States, but to a second European server. Yet, if the Americans no longer have direct access to data, it is still transmitted to them, at their request, in "packets" and only they have mastered the technique of processing this information. In addition, the agreements only just having been signed, the Americans have posed new requirements. The U.S. administration had already stated in 2009 that "the transactions between European and U.S. banks should be captured, without a proven need."

Similarly, the EU has never objected to the submission of PNR data from airlines located on its soil. The information provided includes name, surname, address, telephone number, date of birth, nationality, passport number, sex, but also the addresses used during the U.S. visit, the route of travel, contacts met, as well as medical data. Banking information is also included, such as payment methods, the credit card number and also food bought, which can reveal religious practices. The unilateral American initiative to seize this data was automatically accepted by the European party, which had to suspend its legislation in order to meet overseas requirements [2] .

In both cases, air passengers and the Swift case, the technique is the same. In fact, it is not a case of legal agreements between two parties, between two officially sovereign powers .There is in fact only one party, the U.S. administration, who directly addresses the European citizens. In both texts, the U.S. executive reaffirms its right to access the personal data and thus exerts direct sovereignty over EU nationals.

The rule of U.S. law on European soil is also one of the issues in the negotiations of the establishment of a transatlantic free trade, the transatlantic partnership for trade and investment. (Transatlantic Trade and Investment Partnership).

With TTIP, U.S. companies can, in the name of free competition, file complaint against a state that denies them permits for exploitation of shale gas or imposes food standards and social standards. This system of dispute resolution could allow Americans to bring down swathes of European regulation creating legal precedents to this private American justice. The principle of introducing such a mechanism was in fact accepted by the Europeans in the negotiating mandate, issued to the Commission in June 2013, by the Ministers of European trade. The preferred forum for such arbitration shall be the International Centre for Settlement of Investment disputes (ICSID), a body under the World Bank, based in Washington, including judges, business lawyers, and teachers of law, who are appointed on a case by case basis: an arbitrator appointed by the complainant company, one by the State of Washington, and the third Secretary General of ICSID [3] .

If this procedure, partially accepted, comes into play in the future grand transatlantic market, European law will disappear once again, here in front of a private court on American soil, in which the U.S. side will play the leading role.

Bush, Obama – change in continuity
The Suspension of Fundamental Rights