NATO, the curtain of war open on two fronts

The NATO summit, which kicked off today in Newport (Wales), provides the opportunity for the Alliance, ie the United States, the United Kingdom and their vassals, to share the commitment to and the cost of current offensives: on one hand, the war that is being prepared against Russia and, on the other hand, the ethnic cleansing taking place in the Arab world with a view to ensuring its continued colonization. Needless to say, a potent propaganda machine will make the aggressors look like philanthropists. 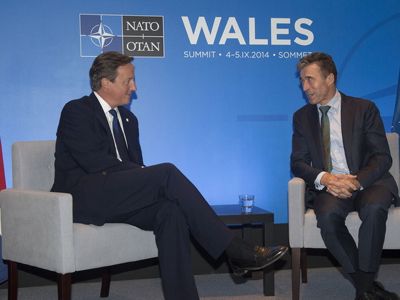 The Summit of Heads of State and Government of the 28 states of NATO opens today in Newport Wales, where these leaders will take key decisions “to ensure NATO is prepared to address current and future security challenges," they attribute to "military aggression of Russia against Ukraine” and “growth of extremism and sectarian conflict in the Middle East and North Africa." In this “crucial” summit the United States, which retains the undisputed leadership in NATO, and its European allies will mobilize simultaneously on two war fronts. (Secretary General Anders Fogh Rasmussen’s press conference)

Europe, in little more than six months, has leaped out of the “Détente” stage back to a situation in some ways more dangerous than that during the Cold War. How did this happen? To understand this, we must look back to the time when, in 1991, the demise of the USSR and its bloc of alliances in the European region created an entirely new geopolitical situation. The United States, the only superpower left standing, tried to take full advantage of this situation, launching a new strategy in which Washington declared it "of fundamental importance to preserve NATO as the primary instrument of Western defense and security, as well as the channel for U.S. influence and participation in European security affairs." To this end it was necessary "to prevent the emergence of European-only security arrangements which would undermine NATO." (Defense Planning Guidance)

But something disrupted Washington’s plans for conquest: contrary to what was foreseen, the Russian Federation began to respond to the crisis of the post-Cold War, tightening its growing economic relations with the European Union by providing the bulk of its natural gas and opening up new business opportunities with China and other Asian countries. These steps threatened the strategic interests of the United States.

It was at this point that the crisis broke out in Ukraine: After spending years of work to take control of key positions in the armed forces and training neo-Nazi groups, NATO promoted the Kiev coup of Feb. 22. This forced Moscow to move in defense of the ethnic Russians of Ukraine, which exposed Russia to sanctions. The sanctions policy is a double-edged sword: Russia’s counter-sanctions harm the European Union and expedite the plan for transatlantic partnership for trade and investment, through which Washington seeks to increase U.S. influence on the EU.

At the same time, under U.S. leadership, NATO has extended its strategic reach into North Africa and the Middle East, and beyond the Afghan mountains and into the Asia/Pacific region. The strategic objective remains that set out in the Defense Planning Guidance: "Our first objective is to prevent any hostile power from dominating a region whose resources would be sufficient to generate global power." Today, especially in Asia, where — In the wake of the Russian-Chinese agreements, frustrating the impact of Western sanctions against Russia by opening new outlets in the East – there looms the possibility of a Eurasian union to offset the U.S.-EU bloc.

The demolition of Libya by war, a similar operation launched in Syria (which has so far failed), the reprisal of the war against Iraq, the double-edged manipulation of Islamic formations (supported to bring down targeted governments, then used elsewhere to justify armed intervention) are all included in the U.S./NATO strategy.

Where does this lead? To other wars, to scenarios of increasingly dangerous confrontation between nuclear powers. To an acceleration of the arms race and, consequently, of military spending. One of the items on the agenda of the Summit is that NATO countries should "spend the right amount of money on deployable forces, training and modern equipment."

What is likely, therefore, is an increase in military spending: Italy’s, according to official data of NATO, amounted to 56 million euro per day, plus the expenditure on military missions abroad and other extra-budgetary funds, which according to the Stockholm International Peace Research Institute brings current military spending in Italy to almost 70 million euro per day ($100 million)*.