Is the new alliance between Turkey and France concerned only with economic issues, to wit entry into the European Union, or is it purely political? In this case, must Paris provide cover for Ankara whatever the policy? Does this support go as far as genocide? 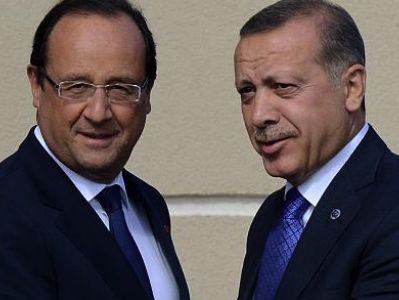 For the second time, the Obama administration has called Turkey into question for its support of the Islamic Emirate (Daesh). First, October 2, Vice President of the United States, Joe Biden, in a speech at the Kennedy School at Harvard. [1] Then on October 23, Deputy Secretary of the Treasury, David S. Cohen, before the Carnegie Foundation [2]. Both accused Ankara of supporting the jihadis and selling the oil they steal in Iraq and Syria.

In the face of President Recep Tayyip Erdoğan’s denials, Biden had apologized. The Turkish government had allowed the PKK to come to the aid of Kobané Syrian Kurds besieged by Daesh. Alas! the behavior of Ankara was not convincing and Washington renewed its accusations.


Turkish border guards fraternizing with terrorists of the Islamic State.

Turkey and the issue of ethnic cleansing

I do not think that what is at issue is the support for jihadists. Turkey does not act in their regard other than in accordance with the US plan, and, at least until mid-October, Daesh has remained controlled by the CIA. But Washington cannot admit that a member of NATO is visibly involved in the massacre that threatens the people of Kobané. The policy of the Obama administration is simple: Daesh was created to do what NATO cannot do, ethnic cleansing, while members of the Alliance must pretend to have nothing to do with it. The massacre of Syrian Kurds is not necessary to Washington politics and the involvement of Turkey constitutes a crime against humanity.

The attitude of Turkey appears as involuntary. And that’s the problem. Turkey is a revisionist state. It never admitted that it committed the massacre of 1.4 million Armenians, 200,000 Assyrians and Christians of the Greek rite and 50,000 Assyrians in Persia (1914-1918) and again of 800 000 Armenians and Greeks (1919-1925) [3]. Far from closing this painful chapter in its history, the condolence message sent by Erdoğan, on April 23, has instead demonstrated the inability of Turkey to acknowledge the crimes of the Young Turks. [4]

Ankara has tried in the past to liquidate the Kurdish PKK. Many have fled to Syria. President al-Assad gave them Syrian nationality at the beginning of the war, and armed them so that they could defend the national territory. On the contrary, for Ankara, killing them would be good news, and Daesh could do this dirty work.

During the war in Bosnia and Herzegovina (1992-1995), the Turkish Army supported the "Arab Legion" of Osama bin Laden who ethnically cleansed the country by massacring quantities of Orthodox Serbs. The fighting jihadists survivors have joined armed groups in Syria, including Daesh.

In 1998, the Turkish Army participated in the military training of the KLA, whose attacks were repressed by the Yugoslav government, justifying the intervention of NATO. During the war that followed, Hakan Fidan (current head of the Turkish secret service MIT) was the liaison between NATO and Turkey. Ultimately, the KLA drove out the Orthodox Serbs and desecrated their places of worship. In 2011, Hakan Fidan sent jihadists to Kosovo to be trained in terrorism by the KLA and to attack Syria.

During the occupation of Iraq, the United States officially relied on Turkey and Saudi Arabia to rebuild the country. The policy was then to provoke civil war and conduct systematic massacres, of mostly Shiites and Christians. As explained by the former adviser to the White House for Homeland Security, Richard A. Falkenrath, this policy was designed to encyst jihadism, use it on the spot and make sure it does not come to the United States [5].

In September 2013, hundreds of jihadists from the Free Syrian Army (supported by France and bearing the flag of the French colonial militia), supported by elements of Al-Nusra Front (Syrian branch of Al Qaeda) arrived in Turkey to take the village of Maloula, raping its women, killing its men and desecrating its churches. Maloula offers no strategic military interest. The attack was only a way to visibly persecute Christians of whom Maloula has been the Syrian symbol for nearly two thousand years.

In March 2014, hundreds of jihadists of Al-Nusra Front and the Army of Islam (pro-Saudis) arrived in Turkey, supervised by the Turkish Army to sack the city of Kessab. The population managed to flee before being slaughtered. When the Syrian Arab Army came to the rescue, Turkey opposed it and shot one of its planes. Kessab is of strategic interest to NATO, because of the proximity of a Russian radar base that monitors the Alliance’s Turkish base of Incirlik. The people of Kessab are Armenians whose families fled the massacres perpetrated by the Young Turks.

We must therefore ask the question: by denying that the massacre of Armenians in general and of diverse mainly Christian minorities, which occurred from 1915 to 1925, was organized by the Committee of Union and Progress, isn’t Turkey saying that genocide is not a crime, but a policy like any other?

The policy of the current Turkish government is based on the "Davutoğlu doctrine," named after the current Prime Minister. According to this political science professor, Turkey must restore its influence of the Ottoman era and unify the Middle East on the basis of Sunni Islam.

At first, the Erdoğan administration advocated the resolution of conflicts left in suspense since the fall of the Ottoman Empire, which he called a policy of "zero problems" with his neighbors. Seizing the rebound, Syria and Iran then negotiated a free trade zone that caused an economic boom in the three countries. But in 2011, during the NATO war against Libya, Turkey abandoned its conciliatory attitude to emerge as a belligerent power. Since then, it has been again angry with all its neighbors, with the exception of Azerbaijan.

During the war against Libya and against Syria, Turkey and France have come together to forge a genuine pact, in the line of the Franco-Ottoman alliance desired by Francis I and Suleiman the Magnificent; an alliance that lasted two and a half centuries and ended only with Napoleon Bonaparte, then resurfaced briefly during the Crimean War.

The new alliance was ratified by the French Foreign Minister, Laurent Fabius, who, in February 2013, lifted the French veto on the accession of Turkey to the EU and is now engaged in promoting its entry.

A document submitted to the United Nations Security Council, certifies that after the secret vote by the US Congress in January 2014, arming and funding Syrian rebels to ethnically cleanse the region, France and Turkey continued secretly to arm all the al-Nusra Front (that is to say, al Qaeda) to fight against Daesh. The idea was always to bring Washington back to its original project.

We note in passing that it is not only Turkey but also France, who armed jihadists who attacked the Christian towns of Maloula and Kessab, raping their women, killing their men and desecrating their churches.

The corruption of French leaders by Turkey

While the press often refers to the corruption of the French ruling class by Qatar, it is silent on the Turkey’s huge investment in French politicians.

The proof of this corruption: the silence of the French officers on domestic developments in Turkey (world record for the imprisonment of journalists, lawyers and senior officers) on its support for international terrorism (Turkish Justice has established that Erdoğan met the Al Qaeda banker 12 times, Turkey has four al-Qaeda camps and organized the transit of tens of thousands of jihadists), on the pillage of Syria (thousands of factories were dismantled in the district of Aleppo and transferred to Turkey) and its massacres (Maloula, Kessab, and soon perhaps Kobané).

It is certainly not in the spirit of these figures, some of which are honorable, to approve of the massacres committed by Ankara. That is nevertheless what they are doing.

By allying herself with Turkey, France has become and active accomplice of its massacres.

[4] The Young Turks were a revolutionary and nationalist Ottoman political reform party, officially known as the Union and Progress (CUP) Committee. They allied themselves with minorities and overthrew sultan Abdülhamid II. Come to power, they implemented a policy of Turkification that led them to plan the genocide of minorities, mostly Armenians.

[6] See the website of the Institute of the Bosphorus.

[7] Former collaborator of François Mitterrand, she became director of Areva (2001-11). She is currently Chair of the Commission on innovation.

[8] MP, former minister and president of the UMP.

[9] Mayor of Bordeaux, former prime minister and former president of the UMP, he became foreign minister in the early wars against Libya and Syria.

[10] Former collaborator of François Mitterrand and former minister, current President of the Foreign Affairs Committee of the National Assembly.

[11] MP and former minister, he was appointed to become Commissioner.

[12] High official, longtime friend of François Hollande, he is now secretary general of the Elysee.

[13] A longtime friend of François Hollande, he is now CEO of AXA Insurance.