The art of war


The Pope between truth and diplomacy

The Pope’s statements in Turkey shocked Syrian refugees. Indeed, the head of the Catholic Church thanked Ankara for its assistance without referring to the context. The flight of the Syrian population was in fact caused by the military support provided to the jihadists, including by Turkey. In addition, the situation of refugees may turn to disaster after international food assistance as halted on 1 December. The UN thereby intends to punish the refugees, who, since the Syrian presidential election in June, have proven that far from being opposed to the Syrian Arab Republic they are overwhelmingly in favor. 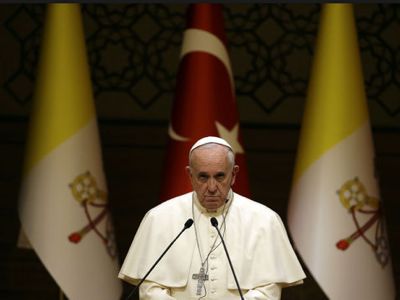 "Today it is said that many things can not be done because there is no money. And yet, the money for weapons can be found, the money to make war": this statement of Pope Francis has been ignored by Italian and Western government circles who conceal the fact that global military spending (approximately 1 750 billion dollars annually according to SIPRI) is driven by the US and NATO (more than 1000 billion dollars annually, to which must be added other expenses of a military nature).

Also virtually ignored were the Pope’s remarks, which sound like an indirect criticism of the capitalist system: "A piecemeal World War III may have already begun", spurred by political and economic problems interrelated with the efforts to save a system "where we have put money at the centre, the god of money."

However, what Rome and other Western capitals gave special prominence to was the fact that, on arriving in Ankara, the Pope expressed his appreciation for "Turkey’s role in the Middle East region, by underlining in particular its humanitarian commitment for the reception of refugees fleeing conflict zones" [1]. The pope took a similar stance in Amman, when he thanked the Jordanian kingdom for the "generous welcome given to refugees from Iraq and other crisis areas, especially neighboring Syria, mired in conflict for too long", and urged Jordan to "continue to engage in the search for the desired peace for the whole region" [2].

Such statements (most likely prompted by diplomatic considerations) which sing the praises of the role played by Turkey and Jordan in the Middle East region and their commitment to refugees, serve as a useful tool in the campaign conducted by Western governments and the media to befog reality. It is no coincidence that President Giorgio Napolitano, in his message on the eve of Pope Francis’ departure to Turkey, highlighted "the crucial role that Ankara is called upon to play in a region torn by strong tensions and bloody conflicts".

Turkey and Jordan are, in fact, the outposts of the military operations conducted by the USA and NATO, whose real goal is not to do away with the Islamic State - which serves their agenda - but to destroy the Syrian state (after Yugoslavia and Libya), to reconquer Iraq (possibly by dismembering it so as to better control it) and ultimately to attack Iran.

According to investigations carried out by the New York Times and the Guardian, the CIA has set up in Turkey and Jordan various military centers for the training of Islamic groups (previously classified as terrorist by Washington) from Afghanistan, Libya and other countries, to be infiltrated in Syria; including groups that founded the EI in Syria, before launching the offensive against Iraq. The weapons are mainly channeled through Saudi Arabia and Qatar.

Turkey - where NATO has over twenty air, naval and electronic surveillance bases - currently hosts LANDCOM, the central command of the land forces of NATO’s 28 member counties, thus also including the Turkish forces; it was set up in Smyrna, from where he directs operations in Syria and Iraq.

In Jordan - according to Associated Press [3] - the CIA runs a two-year training program for the rebel forces supported by the US that operate in conjunction with the Al Qaeda branch in Syria.

Leading to additional waves of refugees who will benefit from the "generous welcome" of Turkey and Jordan.