Russia is reacting to the economic war which NATO is waging against her in the way she would have reacted in a conventional war. She allowed herself to be hit by unilateral "sanctions" in order to better lead the opponent to a battleground of her own choosing. Simultaneously, she has signed agreements with China to safeguard her future and with Turkey to disrupt NATO. As long ago, against France or Germany, her initial defeat could be the guarantee of her victory in the end. 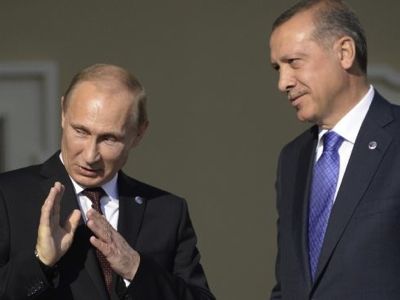 At the annual summit on security organized by the Bertelsmann Foundation and NATO in Munich in 2007, President Vladimir Putin had stressed that the interest of Western Europeans was not only overseas but also and especially with Russia. Since then, he has continued to try to build economic relations, including the construction of the North Stream pipeline under the leadership of former German Chancellor Gerhard Schröder. For its part, the United States has done everything to prevent this rapprochement, including the organization of the Kiev coup and the South Stream pipeline sabotage.

According to the Atlanticist press, Russia would have been severely impacted by the unilateral "sanctions" - in reality acts of economic war - imposed on the occasion of the annexation of Crimea to the Federation or of the destruction of the Malaysia Airlines Boeing and by lower oil prices. The ruble has lost 40% of its value, wasted investments in the South Stream gas pipeline cost $ 4.5 billion and the food embargo has cost $ 8.7 billion. The Atlanticist media assures us that Russia is now definitely ruined and isolated politically.

The Atlanticist press however is at an impasse concerning the consequences of this economic war in the European Union. Besides the ban on food exports which is likely to destroy whole sections of its agriculture, the renunciation of South Stream will weigh very seriously on the future of the Union by increasing the price of energy. 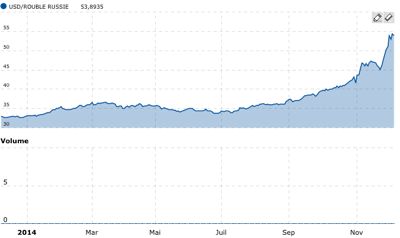 The depreciation of the ruble against the dollar
Source: Boursorama

It seems that the unilateral "sanctions" have had the unintended consequence of deflating oil prices. Indeed, this began on June 20, but deviation from usual variations began only at the end of July, at the time of the first economic "sanctions". Oil prices having no relation to the law of supply and demand, but as with any speculative market, with the volume of speculative capital, the moving of Russian capital following the announcement of sanctions accelerated the process. Initially the fall in oil prices was attributed to an effort by Saudi Arabia to stop US investments in shale gas and non-conventional oil but, at the meeting of OPEC it turned out that the Saudis were probably not the cause. Moreover, it seemed impossible that Saudi Arabia would be speculating against its United States sovereign. 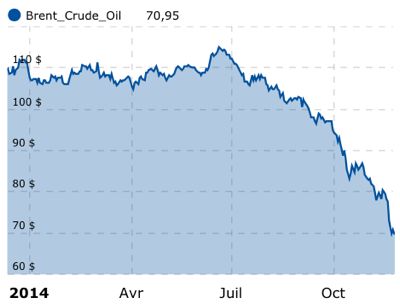 Whatever the case may be, Russia surprised Washington by upsetting the diplomatic chess board: Vladimir Putin visited Turkey, a NATO member state, just after US Vice-President Joe Biden, to conclude huge economic agreements. Not only do these bypass the Alliance’s unilateral sanctions, but they deeply disrupt them.

Turkey today is a country poised to become a terrible dictatorship. According to the State Department -though complacent vis-à-vis a member of NATO – the internet is censored; the government has abused its power by stopping corruption investigations conducted against its members and their families; it has punished the police and the judiciary that led these investigations; minorities have no rights, except the three designated minorities in the 1923 Treaty of Lausanne; the Erdoğan government is holding hundreds of political prisoners (mainly senior officers guilty of having contacted the Chinese Army, opposition politicians, journalists and lawyers); torture is widespread, arbitrary detention and extrajudicial killings are legion.

President Erdoğan has built the world’s largest palace. He did it in a natural park, while the courts had forbidden him to do so. It cost taxpayers $ 615 million.

The criminal drifting of the Erdogan administration has become a major concern within NATO. All the more since Turkey is proving to become also a reluctant ally. Thus, it continues to help jihadists in their fight against the Kurdish people (though very predominantly Sunni) instead of actively joining the United States’ coalition against the Islamic Emirate. This is why Vice President Joe Biden visited Ankara on November 22nd , manifestly to threaten President Erdoğan if he did not march to US orders.

However, on December 1st, Putin also went to Ankara. Distinguishing between economic and political issues, he had a long prepared offer: an unprecedented economic alliance between the two nations. Understanding that this unexpected offer was his only way out in relation to Washington, President Erdoğan signed all the documents that had been written by the Russians. He accepted the strengthening of the submarine pipeline linking his country to Russia via the Black Sea; he bought Russian gas at a good price and even civilian nuclear power plants to power his industry; he delivered his agricultural products to Russia despite the embargo by all other Atlantic States; etc.

For NATO, the Turkish problem is turning into a nightmare.

Vladimir Putin certainly has not changed his mind about Recep Tayyip Erdoğan. He is a petty criminal who joined the Muslim Brotherhood, was propelled to power with the help of the CIA, and he now behaves like a true mafia boss. But the Russian president is used to dealing with oligarchs or heads of state in Central Asia that are no better. He himself arrived at the Kremlin by infiltrating the circles of Boris Yeltsin and Berezovsky.

For his part, Erdoğan knows he owes his power to NATO, and now it is taking him to task. He has no problem doing the splits: political ally to Washington and economic ally to Moscow. He knows that no State has ever gotten out of the Alliance, but he imagines he can stay in power via this double game.

Now let us observe the strategy of Vladimir Putin.

The power of the United States resides both in its currency, which they impose on the rest of the world through the control of the oil market, and on its army.

NATO has just launched an economic war against Russia. For the purposes of propaganda, it masks its attacks under the term "sanctions". However, sanctions would assume an indictment, a trial and a verdict. Not in this case. The most serious "sanctions" had even been imposed after the destruction of a civilian aircraft in Ukraine, when in all probability it was shot down by the new authorities in Kiev.

In response, Vladimir Putin first leaned away from the countries of Western Europe and towards the Far East by signing the largest contract in history with his Chinese partners. Then he used Turkey against NATO to circumvent Western business "sanctions". Whether with China or with Turkey, Russia sells energy in local currency or barter, never in dollars.

Russian experts have calculated that Washington would act if oil prices remained below 60 dollars a barrel for more than six months. Two months ago, the Governor of the Central Bank of Russia, Elvira S. Nabiullina, testified before the Duma that she was ready for this scenario, the institution holding sufficient reserves.

Therefore, if for the moment Russia is seriously affected by the NATO economic attack, the situation could be reversed in six months. To maintain its domination over the world, Washington would then be forced to intervene to drive up oil prices. But in the meantime, this war will have sunk the European Union and NATO, while Russia will have reoriented its economy towards its Chinese ally.

Ultimately, Russia is acting here as it has always done. Formerly, she practiced the "strategy of scorched earth" when Napoleon’s France or the Germany of Adolf Hitler invaded. It destroyed its own resources instead of leaving them to enemy troops and kept retreating to the East. Then it surged back against invaders exhausted by their overly prolonged penetration.

Should Vladimir Putin be tried?
Journal of the change of world order #9