While Washington has no foreign policy, but several contradictory and simultaneous policies, "liberal hawks" have formed around General David Petraeus and the Center for a New American Security. Thierry Meyssan spotlights this think tank which now plays the role formerly devolved to the Project for a New American Century in the Bush era: promoting expansionist imperialism and world domination. 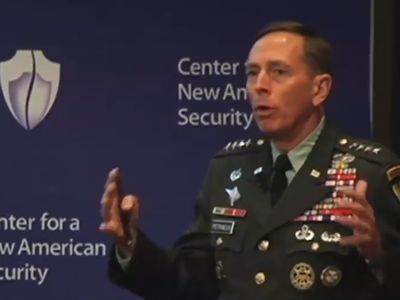 General David Petraeus at the CNAS

The Syrian crisis, which had already been solved by the first conference in Geneva in June 2012, continues despite all the agreements negotiated with the United States. Clearly, the Obama administration does not obey its leader, but is divided between two political lines: one favourable to the imperialist division of the world with China and possibly Russia (President Obama’s position) and, on the other hand, the expansionist imperialists (gathered around Hillary Clinton and General David Petraeus).

To everyone’s surprise, the ouster of the CIA Director and the Secretary of State during the re-election of Barack Obama has not ended the division of the administration, but has exacerbated it.

Once again, the expansionist imperialists have revived the war against the People’s Republic of Korea, under the pretext of a cyber attack against Sony Pictures attributed to Pyongyang against all logic. President Obama ultimately agreed with their discourse and signed a "sanctions" decree.

It seems that supporters of imperial expansion have first regrouped to create the Center for a New American Security, which played in the Democratic Party a role equivalent to that of the Project for a New American Century (and today of the Foreign Policy Initiative) within the Republican Party. As such, they played an important role during the first term of Barack Obama and, for some, have integrated the deep state from whence they continue to pull the strings.

The Center for a New American Security (CNAS) was established in 2007 by Kurt Campbell and Michele A. Flournoy.

These two intellectuals had previously worked together at the Center for Strategic and International Studies CSIS). Two months after the attacks of 11 September 2001, they had edited: “To Prevail: An American Strategy for the Campaign Against Terrorism. [1] The book explained the decision of President Bush to attack not only terrorist groups but also states that support them, and even failed states who failed to fight them on their soil. Inspired by the CSIS work of the Task Force on Terrorism, he advocated a considerable development of the intelligence agencies to monitor the world. In short, Campbell and Flournoy agreed with the official narrative of the attacks and justify the "war on terror" that would cast a pall over the world for over a decade.

In 2003, Campbell and Flournoy, along with thirteen other democratic intellectuals, signed a document entitled “Progressive Internationalism: A Democratic National Security Strategy” [2]. This manifesto supported the post-September 11 war while criticizing the diplomatic weakness of President Bush. In view of the choice of the Democratic candidate in 2004, the signatories intend to promote the US imperial project (defended by George W. Bush) while criticizing the way he exercised leadership, including the doubts he had sown among allies. The signatories were then labeled "liberal hawks". 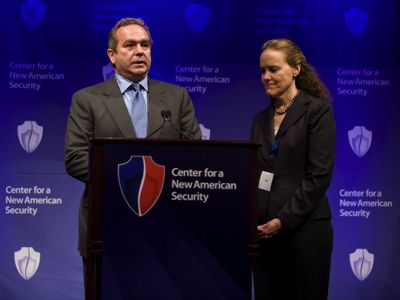 Kurt Campbell and Michele Flournoy at the the CNAS launching ceremony in 2007.

At its inception (2007), the CNAS said it wanted to renew US strategic thinking after the Baker-Hamilton Commission and the resignation of Defense Secretary Donald Rumsfeld. The launch was attended by many dignitaries, including Madeleine Albright, Clinton and Chuck Hagel. At the time, Washington was looking for an escape from the quagmire in Iraq. Campbell and Flournoy intended to advocate a military solution that allows the US military to continue to occupy Iraq without exhausting forces there. To continue its global expansion, US imperialism had to first develop a strategy against terrorism that would enable it to return its troops to Iraq at a reduced format.

Logically, Campbell and Flournoy therefore work with General David Petraeus who had been appointed commander of the military coalition in Iraq because he was the author of the counter-insurgency manual for the US Army. They hire an Australian expert named David Kilcullen, who would become the guru of General Petraeus and who would design the Surge. He said the Iraqi insurgents’ about face is possible by the combination of two factors (carrot and stick): firstly a salary should be paid to the resistors who change camp and ensure order in their territory and, on the other, a strong constraint would be exerted on them by a temporary increase in US military presence. This strategy would be implemented with the success that we know: the country first going through a phase of intense civil war, then slowly returning to calm after being deeply destroyed. In fact, the reversal of part of the Iraqi resistance was only possible because it was organized on a tribal basis.

In fact, during this period, the CNAS and Petraeus are inseparable. Kilcullen becomes advisor to Petraeus and to Secretary of State Condoleezza Rice. The merger is such that Col. John Nagl, an adviser to Petraeus, became president of CNAS when Campbell and Flournoy entered the Obama administration.

During the election campaign, Campbell and Flournoy publish their recommendations for the next president: The Inheritance and the Way Forward. [3] From the Bush era, they question the principle of "preventive war" and the practice of torture. In addition, they recommend redirecting the war on terrorism in order to avoid the "clash of civilizations" that would deprive Washington of its Muslim allies. 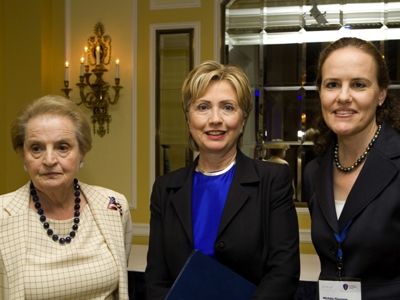 Elected president of the United States, Barack Obama designates Michele Flournoy to monitor the transition at the Department of Defense. Logically, she was appointed Assistant Secretary of Defense for Policy, that is to say, she must develop the new defense strategy. She is thus the No. 2 in the department and manages a budget of $ 200 million.

For his part, Kurt Campbell was appointed to the Department of State to direct the office of the Far East and the Pacific.

Campbell and Flournoy will then be the promoters of the “Pivot” strategy. According to them, the United States must prepare for a future confrontation with China. In this perspective, they must slowly pivot their armed forces from Europe and the broader Middle East towards the Far East.

The CNAS is so popular that many collaborators enter the Obama administration:

Ashton Carter, undersecretary of defense for acquisition, then defense secretary,

Shawn Brimley, Special Advisor to the Secretary of Defense for Strategy and Planning Director at the National Security Council,

Alice Hunt, Special Assistant in the Department of Defense,

Colin Kahl, Deputy Assistant Secretary of Defense for the Middle East and National Security Advisor to the Vice President,

Eric Pierce, deputy head of the Defense Department responsible for relations with Congress,

Sarah Sewall become, in 2014, Undersecretary of State for Democracy and Human Rights,

Wendy Sherman will become, in 2011, Undersecretary of State for Political Affairs,

Vikram Singh, Special Advisor to the Secretary of Defense for Afghanistan and Pakistan,

Gayle Smith, Director for Development and Democracy at the National Security Council,

Edward (Ted) Warner III, advisor to the Secretary of Defense for arms control.

The CNAS is already preparing the program of the next president of the US.

The influence of the CNAS

Michele Flournoy, who aspired to become defense secretary, was barred from that post in 2012 because she was considered too close to Israel. Yet she is now omnipresent in defense think tanks: she is a member of the Defense Science Board, the Defense Policy Board and the President’s Intelligence Advisory Board.

Clearly, her policy recommendations are followed both in regard to the "extended Middle East" and the Far East.

The CNAS has supported the efforts of Wendy Sherman to negotiate the resumption of diplomatic negotiations with Tehran. Quite transparent, this stressed that the problem with Iran’s nuclear issue was less of an issue than the export of its revolution. It calls for a series of extremely severe actions to cut Iranian networks in Africa, Latin America and the Middle East. [4]

Regarding Syria, the NSCC considers that it will be impossible to overthrow the Republic in the short term. It therefore advises the "tourniquet strategy": use the consensus that was created against the Islamic Emirate for all states involved to put pressure on Damascus and on the opposition groups in order to achieve a military de-escalation - but without however collaborating with el-Assad against the Islamic Emirate. Effort will therefore both be focused on obliging the Republic to integrate members of the pro-Atlanticist opposition into government and on humanitarian aid and logistical support provided to rebel areas so that they become attractive. Once the pro-Atlanticists are in government, they will be responsible for identifying the secret workings of the state apparatus so that it can later be destroyed. The originality of the plan is to claim the Syrian desert for the rebels who refuse to join the government. Yet this desert represents 70% of the territory and is home to most of the gas reserves. [5]

The CNAS is paying special attention to the Internet. The idea is to limit government censorship so that NSA surveillance can continue with the same ease. [6] Simultaneously, it is concerned about how the PRC protects itself from NSA spying [7].

In the Pacific, the CNAS advocates rapprochement with India, Malaysia and Indonesia. It has devised a plan to modernize the measures taken against North Korea.

Gradually, the CNAS - which was a Democratic initiative working with republican neocons - has become the main center for studies promoting imperialist conquest.

Besides Kurt Campbell and Michele Flournoy, there are among its directors:

The CNAS is expected to grow as it is now the main think tank capable of opposing any reduction in the US defense budget and of reviving the war industry.

[1] To Prevail: An American Strategy for the Campaign Against Terrorism, Csis Significant Issues Series, CSIS, November 2001.

[5] The Tourniquet. A Strategy for Defeating the Islamic State and Saving Syria and Iraq, Marc Lynch, Center for a New American Security, October 2014. Et How This Ends. A Blueprint for De-Escalation in Syria, Dafna H. Rand and Nicholas A. Heras, Center for a New American Security, November 2014. “The incredible US "peace plan" for Syria”, by Thierry Meyssan, Translation Roger Lagassé, Al-Watan (Syria), Voltaire Network, 29 December 2014.

Billions of dollars’ worth of arms against Syria

There will be no Third World War