What are French Politicians and Journalists Afraid of?

The astonishing Press campaign currently being waged in France, in the name of freedom of expression, against all those who have been questioning the January attacks in Paris, has spread progressively to all the NATO countries. As from now, the use of a critical mind may become a criminal offence punishable by prison. 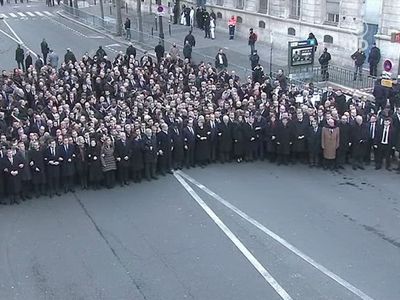 On the sidelines of the "Je suis Charlie" event of January 11, 2015, 56 heads of state and government gathered on a side street of the procession and posed a few minutes for the cameras before returning home. Based on these images, they were presented as leading a demonstration in which they never joined.

The attacks of January 2015 in France gave rise to a massive public demonstration (« Je suis Charlie ») and, immediately afterwards, a campaign of denunciation of any writers who asked questions about their meaning. Almost all the major media gave space to comments or articles which, instead of presenting and discussing the facts, chose to demonize anyone who disputed them.

The aim of this campaign was clearly exposed by the political director of France2, Nathalie Saint-Criq, who explained on the national news, the 12th January - « ...it’s precisely those who aren’t “Charlie” that we have to pinpont, those who refused the minute of silence in schools, those who ’speak out’ on the social networks, and those who do not feel that this is their fight. Well, those are the ones we have to identify, treat, and integrate or re-integrate into the national community ».

Nathalie Saint-Cricq is the companion of Patrice Duhamel, who was CEO of France Télévision in charge of antennas, that is to say, chief censor of the public television service. The latter is the brother of columnist Alain Duhamel. These three journalists have for many years expressed the consensus of the French ruling class.

From whence comes the worries that are moving through the French press?

Since the publication of The Big Lie and the global discussion surrounding it, a growing faction of the population, not only in France but in all NATO member states -and only among them- , no longer trusts the mainstream media to inform. By 2002 and in the years that followed, the credibility of the printing press and radio had fallen to 44%, that of television to 53%. Over time, it had risen to 50% for the clipboard, 55% for radio and 58% for television. [1]

It will be observed that for the ruling class, the media’s credibility is measured by media category, not its contents, indicating an almost complete lack of pluralism of ideas.

The publication of an article by Thierry Meyssan [2] in the hours that followed the attack against Charlie Hebdo suddenly reopened the debate on confidence in the media. From his Syrian exile, the journalist pointed that the terrorists’ procedure had no resemblance to that of jihadists, but rather was comparable to that of military commandos. Therefore, according to him, the important thing was not so much whether the terrorists were Muslims and if they had had contact with authentic jihadists but who had commissioned them to accomplish their crime. This article has been widely adopted in France by many websites, relayed by mailing lists and consulted in three days more than 800 000 times in the French part of the Voltaire Network website.

Strangely, this issue, which has been treated by many foreign media, including BBC and CNN, has not been taken up by the mainstream press in France. Worse, the campaign waged against those who raise questions often quoted Thierry Meyssan’s article without ever addressing his arguments.

In this same article, the exiled journalist observes that the attack against Charlie Hebdo was aimed at re-igniting the « war of civilisations », a strategy which has never been stated either by the Muslim Brotherhood, al-Qaëda, or Daesh, but only by the United States neo-conservatives and liberal falcons. That was all it took to draw accusations of « antisemitism ». And let’s remember that the neo-conservatives were initially a group of Trotskyist journalists who edited the Jewish and Zionist magazine Commentary [3].

Although this accusation is absurd, it probably aimed to show that the ideas of Thierry Meyssan were widely reported, discussed and commented by members of Réconciliation nationale, the political party newly created by Alain Soral and Dieudonné. Now, as the name suggests, this course aims to bring together citizens of different political origins, including members of the extreme anti-Semitic right.

The French press faces two simultaneous challenges. The first is the world challenge to the Anglo-Saxon domination that Thierry Meyssan leads and, on the other hand, the emergence of a new political movement challenging the French "treason elite "around Dieudonné and Alain Soral.

Speaking in Parliament about the attacks, Prime Minister Manuel Valls also designated the comedian Dieudonné as a priority target to shoot down. "And what a terrible coincidence, what an affront to see a repeat hate offender presenting his show in packed halls at the same time on Saturday night when the Nation, at the Porte de Vincennes, took stock. Let us never overlook these facts and may justice be implacable toward those preachers of hate! I say this emphatically here in the gallery of the National Assembly! " [4]. The next day, the comedian was arrested and placed in custody. He is accused of mocking the “Je suis Charlie” mobilization by ridiculing it with the words "Je suis Charlie Coulibaly" (the name of one of the terrorists), which would be a call to anti-Semitic hatred.

Thus, in France today, the defense of freedom of expression means that we send a comedian to prison.

All the French were not involved in the mobilization

In this context, of challenges to the media and political power, studies have been conducted to determine who resisted the French public discourse and what would be their impact on the future of political parties.

First, a strong regional disparity appears: the rate of citizen participation in the “Je suis Charlie” demonstrations reached 71% in Grenoble or Rodez, but drops to 3% in Havre or Henin-Beaumont [5]. 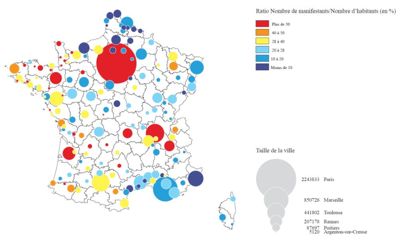 According to Ifop, the fracture line corresponded to that of the National Front vote, but it could also match that of the "No" vote in the 2005 referendum on the European Constitution. After review, the Institute rejects the hypothesis of a correlation with religious affiliation to Islam. 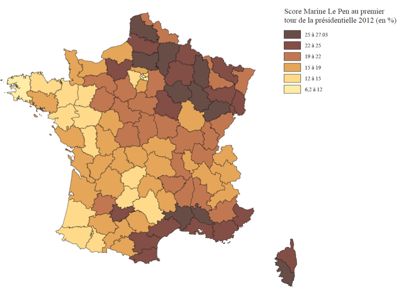 The National Front vote in the presidential election of 2012.
Source: Ifop 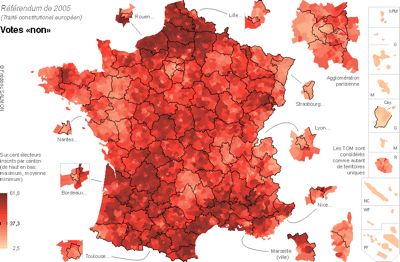 The "No" vote in the 2005 referendum on the European Constitution
Source: Frédéric Salmon

In other words, the challenge to the unanimity of "Je suis Charlie" corresponds to the aspirations of the National Front voters, but would be susceptible to grow to match that of the voters opposed to an anti-Republican and anti-democratic European Union..

The penetration rate of critical thinking, called "conspiracy theories", was measured by Ifop for Sud Ouest. [6]

The newspaper explains what one "must" retain in an interview with the political scientist Emmanuel Taïeb. This sociologist, professor at Lyon Political Sciences, was previously known as a specialist on the death penalty. Although he has never written a scientific paper on "conspiracy theories", he is presented, since the attack against Charlie Hebdo, as a leading expert and is questioned by many media.

By "Conspiracy theories" we must understand here an "adherent to theses" challenging the consensual versions of political facts”. Emmanuel Taieb states that these "theories" are not "rumors" (term used during the 2002 campaign), but are produced by identified persons (he quotes Jean-Marie Le Pen, Thierry Meyssan and Lyndon LaRouche) who would not be journalists (though Thierry Meyssan legally holds a press card and is editor of several newspapers papers in different countries). He states that, ultimately, "Most conspiracy theories are merely new forms of anti-imperialism and anti-Zionism."

Logically the newspaper starts from the issue of Sept. 11 to get to that of "Je suis Charlie." For 21% of respondents "it’s not really certain that these attacks [11 September 2001] were planned and carried out solely by the al-Qaeda terrorist organization." This drops to 16% for the attacks in January 2015. 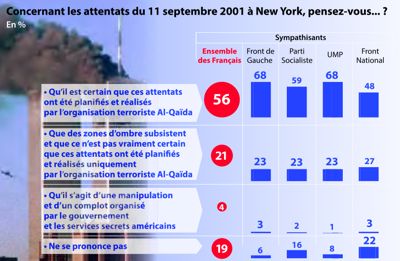 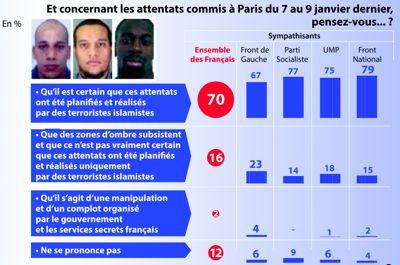 Survey of a sample of 1,051 people representative of the French population aged 18 and older, conducted by self-administered online questionnaire from 21 to 23 January 2015.

Of course, the formulation of questions partially induced responses. Anyway, 16% is already a significant political issue.

Ifop continues the study by observing that the Sept. 11 protesters are spread throughout the electoral spectrum with an over-representation in the National Front. But lo and behold, about "Je suis Charlie," they are more numerous in the Front de gauche and the UMP than in the Socialist Party and the National Front.

So the rhetoric equating dissent to an extreme right origin with a waft of anti-semitism collapses. The "complotistes" are actually citizens who rebel against the system on behalf of the values of the Republic and democracy. This has been understood very well by the National Front largely evolving over the past decade from a far-right party to a patriotic party, the Left Front, and now Réconciliation nationale, although these three parties do not relate to each other.

[3] “The New York Intellectuals and the invention of neoconservatism”, by Denis Boneau, Voltaire Network, 20 January 2005.

Darfur: Simplification and Moralization of the Conflict

Pakistan: after the missiles, the smokescreen

The two bodies of the Israeli Prime Minister