Package of measures for the implementation of Minsk Agreements 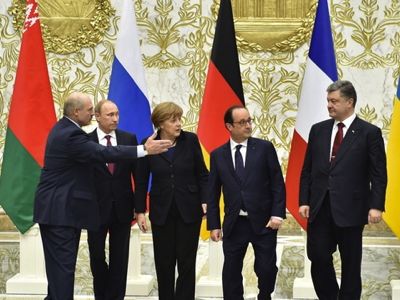 1. Immediate and comprehensive ceasefire in certain areas of the Donetsk and Luhansk regions of Ukraine and its strict implementation as of 15 February 2015, 12am local time.

for the Ukrainian troops: from the de facto line of contact;

for the armed formations from certain areas of the Donetsk and Luhansk regions of Ukraine: from the line of contact according to the Minsk Memorandum of Sept. 19th, 2014;

The withdrawal of the heavy weapons as specified above is to start on day 2 of the ceasefire at the latest and be completed within 14 days.

The process shall be facilitated by the OSCE and supported by the Trilateral Contact Group.

3. Ensure effective monitoring and verification of the ceasefire regime and the withdrawal of heavy weapons by the OSCE from day 1 of the withdrawal, using all technical equipment necessary, including satellites, drones, radar equipment, etc.

4. Launch a dialogue, on day 1 of the withdrawal, on modalities of local elections in accordance with Ukrainian legislation and the Law of Ukraine «On interim local self-government order in certain areas of the Donetsk and Luhansk regions» as well as on the future regime of these areas based on this law.

Adopt promptly, by no later than 30 days after the date of signing of this document a Resolution of the Parliament of Ukraine specifying the area enjoying a special regime, under the Law of Ukraine «On interim self-government order in certain areas of the Donetsk and Luhansk regions», based on the line of the Minsk Memorandum of September 19, 2014.

5. Ensure pardon and amnesty by enacting the law prohibiting the prosecution and punishment of persons in connection with the events that took place in certain areas of the Donetsk and Luhansk regions of Ukraine.

6. Ensure release and exchange of all hostages and unlawfully detained persons, based on the principle «all for all». This process is to be finished on the day 5 after the withdrawal at the latest.

7. Ensure safe access, delivery, storage, and distribution of humanitarian assistance to those in need, on the basis of an international mechanism.

8. Definition of modalities of full resumption of socio-economic ties, including social transfers such as pension payments and other payments (incomes and revenues, timely payments of all utility bills, reinstating taxation within the legal framework of Ukraine).

To this end, Ukraine shall reinstate control of the segment of its banking system in the conflict-affected areas and possibly an international mechanism to facilitate such transfers shall be established.

9. Reinstatement of full control of the state border by the government of Ukraine throughout the conflict area, starting on day 1 after the local elections and ending after the comprehensive political settlement (local elections in certain areas of the Donetsk and Luhansk regions on the basis of the Law of Ukraine and constitutional reform) to be finalized by the end of 2015, provided that paragraph 11 has been implemented in consultation with and upon agreement by representatives of certain areas of the Donetsk and Luhansk regions in the framework of the Trilateral Contact Group.

10. Withdrawal of all foreign armed formations, military equipment, as well as mercenaries from the territory of Ukraine under monitoring of the OSCE. Disarmament of all illegal groups.

11. Carrying out constitutional reform in Ukraine with a new constitution entering into force by the end of 2015 providing for decentralization as a key element (including a reference to the specificities of certain areas in the Donetsk and Luhansk regions, agreed with the representatives of these areas), as well as adopting permanent legislation on the special status of certain areas of the Donetsk and Luhansk regions in line with measures as set out in the footnote until the end of 2015.  [1]