The current world out-stands the creation of alliances between emerging countries which favor the conformation of a multipolar new world order. The visit of the Argentinian president to Moscow on the third week of April is a clear example of this process, since it fulfilled the objective of articulating a long term strategic partnership. 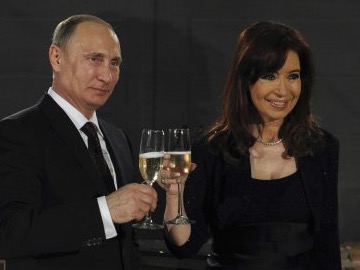 On October 22, 2015 the Russian Federation and the Republic of Argentina will celebrate 130 years of diplomatic relations. There is no time for contemplations, the global scenery descries huge challenges which invite to the consolidation of multi-vectorial alliances. A strategic look always begins by creating space for cooperating in the economy (commerce, investment, etc.), it strengthens them throughout finance and finally it reaches energy and geopolitical affairs.

The more than 20 documents subscribed by the president of Argentina, Christina Fernández de Kirchner (CFK), during the meeting with her counterpart, President Vladimir Putin, indicate the opportunities which emerge after the bilateral links have passed from "strategic partnership" (which started in December 2008 during Dmitri Medvedev’s presidency) to an "integral strategic partnership" (April of the current year).

The closer links between the Casa Rosada (Argentina’s House of government) and the Kremlin shows the Washington’s incapacity to sabotage the construction of a multipolar world. During the first decade of the 21st century, North American imperialism had failed to stop the rise of new economic and political actors in Latin America and the Eurasian region.

As an example, Argentina’s commercial geography is an expression of Orient’s centrality in the world economy: between 2005 and 2013, exchanges with Russia, India and China (Countries that with Brazil and South Africa are part of the BRICS), have passed from 9.36% to 14 percent. In contrast the United States of America’s participation dropped from 13 to 8.21% during the same period according to the UN Comtrade’s database (International Trade Statistics Database).

Investment opportunities increase rapidly regarding to food, mining, petrol, software, etc. In the Russian-Argentinian business forum, more than 50 Argentinian corporations attended to close deals with 100 Russian counterparts. It’s also fair to highlight that economic complementarity should privilege the brevity, the use of local currencies. What stops the commerce’s and bilateral investment’s "de-dollarization"?

Regarding to the worldwide energy production, according to CFK’s words, nuclear energy will play a more important role because, it’s cheaper , cleaner and less prone to price fluctuations in the world’s market in contrast to more conventional energies like petrol, gas, coal, etc.

Due to this, the construction of the sixth nuclear power plant in Argentinian territory has been approved with no obstruction and will cost 2 billion US dollars. The State Atomic Energy Corporation (ROSATOM) is going to give a series of guidelines that will include technology transferences, and a financial plan from the Russian Development Bank (Vnesheconombank) with preferential interest rates that would favor Argentina.

The company Power Machines will undertake the installation of a modern system of turbines with its Argentinian partners in the hydroelectric plant of Chihuidos I, placed in the Neuquén River (located in the north of Patagonia). Thanks to the collaboration with Russia, the Argentinian Government will be in conditions to save an enormous quantity foreign exchange for less purchase of fuel used in the thermal power plants.

In the matter of fossil fuels, it’s important to remark that Russia and Argentina look forward to remain as protagonists in the global energy scene. According to the estimations of the International Energy Agency (IEA), both countries’ abundant deposits of gas and petrol (conventional and no conventional), place them between the five energy world powers.

The enterprise Treasury Petroleum Fields (YPF) and the colossal Gazprom (the biggest natural gas company in Russia), achieved an important memorandum of understanding. For the first time in its history, both companies are going to make parallel investments in exploration activities, production and transportation of hydrocarbons in Argentina and third countries.

In the other hand, facing the extinction of more traditional energy sources, the propensity to "geo-politicization of the international relations" increments. This situation promotes the formation of spheres of influence and along with this, the creation of alliances in the geopolitical scene. Through war and occupation as mechanisms of dispossession, the occidental powers look forward to guarantying the raw commodities access to its companies.

What strategies will be capable of resisting the imperialism’s offensive? How to build a retaining wall facing the military asymmetry compared to The Unites States of America? There is no doubt, the "integral strategic partnerships" should deepen the deals in matter of security and defense with geopolitical powers such as Russia and China, by the way, these are the only countries capable of offsetting the North American forces in Latin American territory.

We are definitely witnessing a new and accelerated economic and geopolitical system where the American unipolarity doesn’t find its place. Under that same perspective, the tecno-military cooperation with the Russian Federation constitutes as key aspect for guarding Latin America’s sovereignty.

The Argentinian government in alliance with Moscow will seek for neutralizing in one hand, the United States’ interventionism in the region and in the other hand counting with more geopolitical capacities facing the England’s military incursion in the Malvinas Islands. In the last years Buenos Aires has bought two MI17E helicopters and four multipurpose vessels for patrolling the south Atlantic, all of Russian origin.

On the third week of April, during the meeting with Serguéi Shoigú, the Minister of Defense of Argentina, Agustín Rossi, committed to the acquisition of three more helicopters to form a system of five rotor-crafts and a pair of Su-24 fencer attack planes. Likewise, both parts approved the exchange of instructors and military for performing peace operations in with UN, the parallel production of military equipment and the performing of military exercises (Venezuela is the South American country which is pioneer in performing analogue operations with the Russian Army).

In the final analysis, the governments of Russia and Argentina coincide that the unilateral economic sanctions, the military invasions and the attacks of the vulture funds guaranteed by the New York laws are currently intolerant. Therefore, the construction of multipolar world demands the both countries unify efforts to articulate a security and defense strategy against the excesses of the Unites States and its allies...