The Russian authorities publish few documents concerning their vision of the world. So the programme « Direct Line » with Vladimir Putin offered a rare opportunity to examine the evolution of Moscow’s perception of things. Beyond the performance of the Russian President, who spent four hours answering questions from his fellow citizens, we note that Russia seems to have given up the idea of regularising its relations with the United States, and is preparing for a long period of Western isolation. 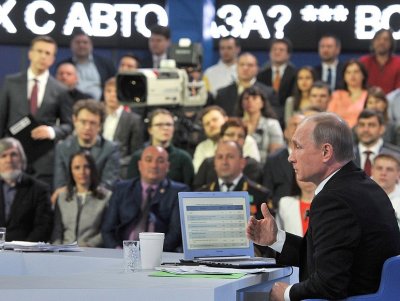 While President Obama avoids replying to questions from his fellow citizens and only appears in public when he has tele-prompters to read, President Putin improvised a long session of questions and answers with his people.

On the 16th April, Vladimir Putin took on an unusual task - to reply for four straight hours to questions from his compatriots, live on three TV channels and three radio stations. During the programme, the organisers received more than 3 million phone calls and asked the President 74 questions [1].

Even though certain questions were obviously prepared, others were improvised. Vladimir Putin’s reactions clearly exposed his thoughts.

First of all, the President explained his vision of the institutions of government, without making reference to Western categories such as the « Republic » (the service of the general interest) or « Democracy » (government of the people by the people), nor the concept of his advisor Vladislav Sourkov of « Soveriegn Democracy » (in other words popular management free from outside intervention).

According to him, the role of the state is to come to the help of the people and the political administrators in order to maintain the unity and stability of the people. Thus he explains that he rejects certain decisions – which might otherwise be relatively desirable - because they might destroy the unity of the people. In the same way, he opposes frequent legal changes, claiming that people cannot trust directors who are always modifying the rules of the game. He shows complete disinterest for Western management, with its fiscal and categorial exonerations and its allocations which are proportional to wages. He conceives his role rather as an organiser of grand projects and the creator of rules which remain as simple as possible.

As in all countries, the questions from the citizens concerned economic problems. Russia has just come through a serious crisis due to the Western embargos (presented as « sanctions ») and the drop in world oil prices. The buying power of retired workers has been maintained, but because of inflation, that of the active population has dropped by about 10 %.

For Vladimir Putin, the main problem is due to the lowered cost of petrol and the drop in wages that resulted. He considers that his country has to adapt to this new situation, which may well last for a while. On the other hand, the embargos in no way diminish the country’s wealth, but call for a period of reorganisation. This even allows Russia to mark a pause after the period of ferocious competition which followed its adhesion to the World Trade Organisation. Russia has to profit from this respite in order to save its agriculture, some of which is threatened. It must do this for its agricultural population, but also out of strategic necessity. The embargo demonstrated that the country was not auto-sufficient, and that its alimentary security could be threatened.

Vladimir Putin does not think that the Western gesticulations – including the manipulation of private debts to cause the government to become indebted – are any threat to the Russian banking system. He believes that he will be able to stabilise the rouble before the end of 2016.

Defining his foreign policy, Vladimir Putin affirms that he has no imperial ambitions. He even criticises the way in which the USSR had imposed their own economic model on its partners, and admits that Russia is currently paying for that misatke.

However, he confirms his responsibility to protect all those, whether or not they have a Russian passport, who define themselves as being part of the Russian culture.

When he was invited to name the enemies of Russia, he cited terrorism, xenophobia and organised crime. He confirmed that his country does not count any state as its enemy, and asks other states to act similarly.

That being said, he considers the United Sates to be an empire, even though he does not say so formally, and accuses the US of having no allies, only vassals. He observes that they adored Boris Eltsine until he stood up to them in Yugoslavia, when they covered him with insults. Generally speaking, he reproaches them for the same things as the USSR, in other words, attempting to impose on other countries their own economic model. He concludes by saying that they will fail in the same way, and will have to pay the price.

Concerning Ukraine, he considers that Washington had manipulated the people’s frustrations by talking about nationalism. So now they think of Russia as an enemy, although it invested 32 billion dollars in Ukraine, but they think of the United States as an ally, when they only invested 5 billion dollars. He confirms that Russia lost for reasons of interior local politics, without specifying which of Ukraine’s old Russian allies he blames. For him, it is important to save the populations of Russain culture in Donetsk and Lougansk, which is why he intends to demand the application of the Minsk Agreements.

and the Collective Security Treaty Organisation, which is a military alliance.
But he did not mention the Eurasian Economic Community, which still seems to be in its early stages.

President Putin cites Tsar Alexander III, who believed that Russia’s only true allies were her Land Army and her Navy. He confirms that his country has approximately the same nuclear capacities as the United States, and concludes that one might reasonably adopt one point of view or the other. Finally, he announced that in 2020, 70 % of the country’s military equipment will have been renewed. The Army will then have recovered its old power.

Commenting on the Mistrals ordered from France, he noted that it had been more a question of coming to the aid of French industry than a Russian necessity – an elegant way of avoiding comments on the bribes shared in advance by Nicolas Sarkozy and Dmitry Medvedev (who was at that time ambitious enough to consider running against him for the Presidence). He announced that if they are not delivered, he will ask only for the reimbursement of the sums already spent. He went on to say that it must be admitted that the sovereignty and reliability of France are no longer what they used to be since France reintegrated the NATO staff.

Asked about the Islamic Emirate, he noted that this organisation sprang up in Iraq and was manned by a large number of Iraqi soldiers who had been marginalised by the US occupiers and the powers that they had put in place. He warned about the danger represented by Russian and ex-Soviet state citizens who have joined up with Daesh and who may come back home to commit terrorist attacks.

The founding victory against nazism

Vladimir Putin multiplied his allusions to the « Great Patriotic War », in other words the Second World War and the struggle against nazism. In his eyes, this was in fact the founding act of modern Russia, which united a great diversity of people in their fight for a common freedom. Saying this, he admitted that the Revolution of 1917, like the creation of the Federation in 1991, are not necessarily federating events.

This reference obliged him to refuse, without any possibility of negotiation, the presence of nazis in power in Kiev, while the European Union accepts them without regret. The comment also allowed him to suggest that the United States are the successors of the Third Reich, an opinion he had voiced in the past, and which had raised violent controversy.

Should Vladimir Putin be tried?
Journal of the change of world order #9