The number of adepts of the Chinese currency is ever-growing in its process of internationalisation. After gaining support in Pacific Asia and Europe by installing clearing centres and permit the investment of financial assets denominated in yuan, now Canada, the United States’ long-time ally, breaks its resistance and is called upon to become the platform of «yuan-ization» on the American continent. 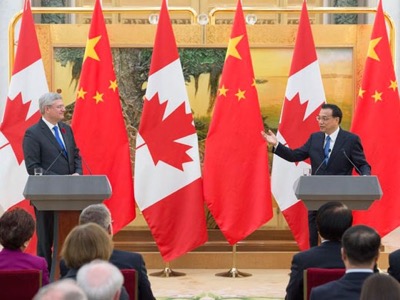 The yuan has become one of China’s components of «soft power» (ideological, cultural and diplomatic means that a country uses to influence the actions of the actors in the international system) to gain support of the countries most aligned with the US foreign policy.

Every time its annual growth is situated around 7% and the profitability prospects in the Special Economic Zones are exhausted rapidly, China looks for ways to transform the terms of its economic relationships with industrialised countries.

As the demand for high value added projects from Chinese costumers is on the rise, hundreds of occidental entrepreneurs show more interest in increasing trade with the Asian giant.

Due to the growing importance of China in capital flows (direct foreign investment, portfolio investments, etc.) and global trade, the influence of the yuan as a medium of payment, instrument of investment and reserve currency grows in parallel in more and more places in the global economy.

The same is happening in Canada, the country that is incorporated into the North American Free Trade Agreement (NAFTA) with Mexico and the United States. Surprisingly, the Canadian prime minister, Stephen Harper, does not only have any objections to the internationalisation of the yuan, on the contrary: he does not spare any effort to turn Toronto into the main platform of the Chinese currency outside Pacific Asia.

Although the Chinese government at first had the privilege of being able to use the «people’s currency» (renminbi) as the only country in Asian territory, later on the yuan rose above its continental limits and came to Latin America, Africa, the Middle East and Europe.

In the case of the American continent, until the end of last year the internationalisation of the yuan was limited to the establishment of bilateral swap agreements (currency swaps) with the central banks of Brazil and Argentina (the two biggest economies in South America).

Although it is true that China started talking to senior officials of the Uruguayan government in order to turn Montevideo into the «Latin American capital of the yuan» [1], there have not yet been initiated more projects orientated at encouraging the use of the Chinese currency in Latin American and the Caribbean.

The Canadian government, however, managed to concrete three important agreements over the course of the last six months. In the first place, both countries agreed to install the first RMB Offshore Clearing Bank to facilitate the use of the Chinese currency on the American continent. Before that, these centres were only implemented in Asia and Europe.

Under the supervision of the Industrial and Commercial Bank of China (ICBC) based in Toronto, the direct cost centre enables convertibility operations between the Canadian dollar and the Chinese currency without having to bear in mind the market rates of the US dollar, which permits reducing the costs of transaction and forger closer ties between the companies from both countries through the exchange of goods and services [2].

According to estimations elaborated by the Canadian Chamber of Commerce, the Canadian companies will be able to save approximately 6.2 billion US dollars over the course of the next decade, thanks to the implementation of the RMB Offshore Clearing Bank. As a consequence, the amount of exportations will unprecedentedly reach a total between 21 and 32 billion US dollars.

Furthermore, the People’s Bank of China and the Central Bank of Canada subscribed for a currency swap with agreed maturity of three years for a total of 30 billion Canadian dollars (200 billion yuan).

Once the Federal Reserve System (Fed) concluded its quantitative easing programmes, various countries suffered from depreciation of their currencies with respect to the US dollar: the same happened to Japan and member states of the Euro zone, just like advanced export countries of commodities such as Australia and Canada and, of course, the economies of the periphery with the most financial frailties.

However, the US government has increasingly resisted to tolerate appreciation of the dollar because of the adverse effect on the economic growth. It is enough to remember that the Fed raised the voices of its critics against the accommodative monetary politics of the European Central Bank (ECB) and the Bank of Japan in the weeks before.

Therefore, everything seems to indicate that the tensions between currencies will increase during the coming months [3]. By means of the swap agreement, China and Canada abandon the use of the US dollar and thereby reduce the effects of exchange rate volatility in bilateral trade flows and investment.

In the end, the Chinese government granted an investment quote with a maximum of 50 billion yuan (8.2 billion US dollars) to Canadian entrepreneurs in order to participate in the Renminbi Qualified Foreign Institutional Investor program (RQFII) [4] .

That way, Canadian investors have the endorsement of the Chinese regulatory authorities to buy financial assets denominated in yuan, like already had happened with entrepreneurs based in London, Paris, Frankfurt and Luxemburg.

Without a doubt, the cooperation agreements between China and Canada have had excellent result, both with respect to the trade perspectives and investment in Canadian companies as to crediting to the internationalisation of the yuan in North America boosted by Canada.

As an inevitable consequence of the growing importance of Pacific Asia in North America, the yuan currently occupies the 2nd place (10.2%) in the ranking of most used currencies by Canada in its transactions with China and Hong Kong: it is used 8.5 times more than the US dollar (1.2%) and is only surpassed by the Canadian dollar (75.4%).

According to the Society for Worldwide Interbank Financial Telecommunication (SWIFT), Canadian corporations increased their Yuan-denominated operations by 213% in comparison to 2013 in March 2015 [5].

The enthusiasm that the Chinese currency has stirred up in Canada is so big that there will be held a financial summit about Pacific Asia in the Vancouver convention centre on 16 June. The summit is sponsored by City AgeMedia, AdvantageBC and the province of British Columbia [6].

The meeting of academics and members of the business elite is looking for ways to build new frameworks of collaboration with China in order to implement the use of the yuan in more Canadian cities than Toronto (among them Vancouver, Montreal and Calgary) and, at the same time, proportion training sessions to exporters and importers so that maximum efficiency of the agreements made in November 2014 can be obtained [7].

In conclusion, while President Barack Obama fails in his attempt to tear down the triumphs of Xi Jinping’s government on a global scale, the Chinese consolidate the process of «yuan-ization» in the «back yard» of the White House, armed with Canada as a «Trojan horse».

Canada bans Venezuelans living on its territory from electing their president