On the fringe of the 5+1 negotiations

The 5+1 negotiations are at a standstill, not because of Washington and Teheran, but because Moscow has no intention of allowing the new regional order in the Middle East to compromise its interests. Thierry Meyssan lifts the veil on the prolongation of the Lausanne discussions. 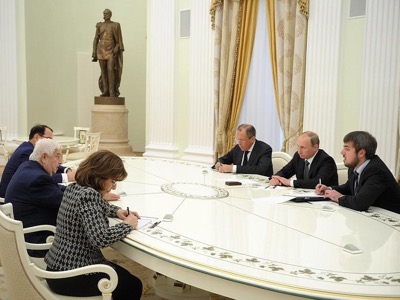 The 5+1 negotiations are dragging on. After the health problems affecting Messrs Kerry and Zarif, all sorts of other pretexts have been evoked in order to postpone the signing of the treaty. And yet neither Washington nor Teheran seem to be worried. On the contrary, everything is occurring as if the problem was no longer between the United States and Iran, but between these two states and the Security Council.

I have revealed in this column the secret negotiations between Israël and Saudi Arabia aimed at adapting to the consequences of the agreement [1]. While I am not in possession of specific information concerning the Russian initiative, we can nonetheless deduce the major points.

The US-Iran agreement [2] is President Obama’s second choice after the failure of the sharing of the « Greater Middle East » with Russia, in 2013 [3]. During the first Geneva conference on Syria (but in her absence), Washington planned to charge Moscow with the task of controlling the Arab nations and ensuring the safety of Israel, home to more than a million ex-Soviets. But the plan failed, not because of Russia, but because of divisions in Obama’s administration. The fans of the Cold War, led by Hillary Clinton and General David Petraeus, sabotaged the agreement.

It is therefore perfectly logical that Moscow wants to ensure that the US-Iran negotiations will not play out to their disadvantege.

What are Russia’s strategic objectives ?

At the global level, Russia and China continue their project to establish continental routes which will guarantee their economic freedom. At the same time, the United States is using whatever methods it can to prevent them, in order to maintain their domination of the world via the control of maritime routes (« control of common spaces » theory) [4].

As far as the « Greater Middle East » is concerned,» [5], Russia considers that it is in its interest to have, at its Southern borders, an Iran which is strong enough to prevent a pro-Western invasion, but not strong enough to fall back on fantasies of a Persian empire. Vladimir Putin today enjoys excellent relations with the Revolutionary Guide Ayatollah Khamenei, as well as with the President of the Republique, Cheikh Rohani. He noted the military successes of the Guardians of the Revolution in Palestine, Lebanon, Syria, Iraq and Bahreïn, and also Iran’s formidable industrial development. Several times a week, Russian emissaries, both official and un-official, travel to Teheran to exchange political, military and economic information.

Russia is worried about the consequences of the up-coming sale of Iranian gas to the European Union - a project which had originally been imagined by the United States so that Brussels would be able to do without Russian gas. But from Moscow’s point of view, the risk only exists in the short term, because Russia is progressively turning away from the European Union, and, in the medium term, she will be selling her gas to China. The risk for Russian finances will therefore only exist for a period of about five years, perhaps even less - just the time to build or reinforce the gas pipe-lines through Siberia. In compensation for the sale of Iranian gas instead of Russian gas in Western Europe, Teheran has agreed to buy an enormously expensive quantity of Russian weaponry. The weapons will mostly be S-400 anti-air missiles, capable of destroying any flying object.

However, this agreement is contrary to Resolution 1929 of the Security Council, which prohibits the exportation of weapons to Iran [6] ; a resolution that President Medvedev had decided to support and apply – this provoked a crisis with his Prime Minister of the time, Vladimir Putin. This is why the same Vladimir Putin is now demanding that this resolution be abrogated before the signature of the 5+1 agreements.

This point should not hurt Washington, but will strengthen the division of the world into two blocks.

Russia’s other strategic interest in this matter is the future of Daesh. There is no longer any doubt that this terrorist organisation, today commanded by Turkey and financed by part of the Saudi royal family, is ready to abandon Iraq and Syria to move on into the Russian Caucasus. Since September 2014, the management of the Islamic Emirate has been purged of its North African officers, practically all replaced by ex-Soviets, mainly Georgians and Ouzbeks. Currently, the interior communications between the officers of Daesh, by walkie-talkie, are no longer in Arab, but almost always in Russian – Arab jihadists are now no more than cannon fodder. Moscow must therefore eliminate Daesh now, in the « Middle East », or else be obliged to fight them later on her own territory, in the Caucasus.

This is why Russia asked for the presence of a Syrian delegation in Moscow. To the great surprise of the Syrian Minister of Foreign Affairs, Walid Moallem, the delegation did not talk to the Russian counterpart, Sergeï Lavrov, but was received by President Putin, on the 29th June. Putin warmly welcomed him in public, in the presence of the Press, and delivered a long speech explaining the Russian project - Syria must join with Saudi Arabia, Jordan and Turkey to eliminate Daesh. M. Mouallem was then invited to answer questions from the Press, side by side with President Putin, but without ever being able to answer him directly.

Clearly, Russia had already secretly discussed this plan, not only with Saudi Arabia, [7], Jordan and Turkey [8], but also with Iran, and intended to show the rest of the world that she was in a position to dictate Syria’s policy. Although startled by the Russian initiative, Syria can only benefit from this plan, since it would mean the end of the war.

In fact, the Russian plan corresponds to the position of Syria, who, since January 2014 and the second Geneva Conference (to which she was invited, contrary to the first Conference), has been calling for international unity to combat terrorism. This position has provoked much sarcastic laughter, since the jihadists are supported, under the name of « moderate Syrian opposition » … by Saudi Arabia, Jordan, Turkey and, more generally, by NATO.

Is the Russian plan feasible ?

The Russian plan, which is in the interest of all the states of the « Greater Middle East », however contravenes the agreements already negotiated between the Saudis and the Israelis. Besides this, it deprives Turkey - and therefore NATO – of its trump card : the control of international jihadists. Its application requires the internal balance of each state implied – a subject which presents a large number of uncertainties, but about which the Russian secret services must be very well-informed.

In reality, the Russian plan questions the sincerity of the United States. Do they really want peace in the « Greater Middle East » (in order to transfer their troops to the Far East) and are they ready to deprive themselves of Daesh as a future weapon against Russia ?

This is why the discussions are dragging on. President Rohani is in Russia for the BRICS summit and the Shanghai Cooperation Organisation in Oufa. President Putin will be visiting Turkey before the formation of the new government or the next general elections, while King Salman of Saudi Arabia is expected in Moscow.

[2] “What will become of the Near East after the agreement between Washington and Teheran ?”, by Thierry Meyssan, Translation Pete Kimberley, Voltaire Network, 23 May 2015.