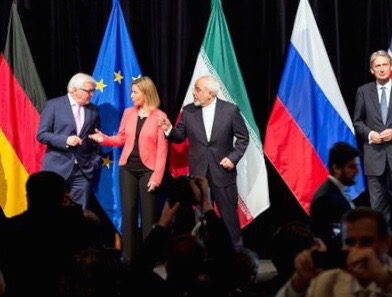 "Today is a historic day and it is a great honor for us to announce that we have reached an accord on the Iranian nuclear solution, to make our world safer.” Federica Mogherini, EU High Representative for Foreign Affairs and Security Policy, said this in Vienna on July 14.

Almost simultaneously another announcement arrived from the United States: "The U.S. Air Force and National Nuclear Security Administration (NNSA) have conducted the first flight test of the jointly developed B61-12 guided nuclear bomb from a Boeing F-15E Strike Eagle at the Tonopah Test Range in Nevada." (flightglobal.com, July 10) This weapon will soon replace the B61, the U.S. nuclear bomb, with 70-90 of them stored in Aviano and Ghedi Torre, part of an arsenal of at least 200 nuclear weapons stored in Germany, Belgium, the Netherlands and Turkey.

The success of the test, "provides clear evidence of the nation’s continued commitment to maintain the B61,” says the NNSA, which then specifies that "the B61-12, with a tail kit assembly produced by Boeing, will replace the B61-3, -4, -7, -10 bombs in the current U.S. nuclear arsenal." It is thus officially confirmed that the B61 bomb will be transformed from a free falling to a "smart" bomb, which can be dropped on the target from a great distance. The precision-guided B61-12, whose cost is estimated at 8 billion to 12 billion dollars for 400-500 bombs, is configured as multi-purpose weapon, with an average power of 50 kilotons (about four times the Hiroshima bomb). It will perform the function of many bombs, including those designed to "decapitate" the enemy country, destroying the bunker command centers and other underground structures in a nuclear first strike.

The replacement of the B61 with the B61-12, announces the NNSA, "provides assurance to our allies." This is demonstrated by the fact that at Aviano and Ghedi, nuclear bombs are kept in special hangars with fighters ready for nuclear attack: U.S. F-15 and F-16 and Italian Tornado jets, whose pilots are trained for nuclear attack. In Italy, in 2013 and 2014, NATO held the nuclear war exercise Steadfast Noon, which Polish F-16s also participated in last year. Thus Italy is violating the Treaty on Non-proliferation, whose Article 2 states: “Each non-NWS party undertakes not to receive, from any source, nuclear weapons, or other nuclear explosive devices; not to manufacture or acquire such weapons or devices; and not to receive any assistance in their manufacture.”

For this reason the big hand of “Apocalypse Watch,” the symbolic timepiece that the “Bulletin of the Atomic Scientists” uses to tell us how many minutes until the midnight of nuclear war, has been moved from five to midnight in 2012 to three to midnight in 2015, the same level as in 1984 in the midst of the Cold War [1].

The risk is particularly high that one day nuclear weapons will be used in the Middle East, where the only country to possess them is Israel, which unlike Iran has not signed the Non-Proliferation Treaty. According to estimates, the Israeli armed forces have 100-400 nuclear warheads, including H-bombs, with a power equivalent to almost 4,000 Hiroshima bombs. Israeli delivery systems include over 300 U.S. F-16 and F-15 fighter-bombers, also armed with U.S.-Israeli Popeye missiles with nuclear warheads, and approximately 50 Jericho II ballistic missiles on mobile launching ramps. Israel also has four Dolphin submarines, modified for nuclear attack, provided by Germany, which last September delivered the fourth of the six planned.

In addition, the United States has signed agreements to supply, to Saudi Arabia, Bahrain and the United Arab Emirates, nuclear technology and fissile material with which they can acquire nuclear weapons. Saudi Arabia has officially declared that does not prevent them from building or acquiring nuclear weapons with the help of Pakistan, whose nuclear weapons program they fund to the tune of 60 percent [2].

On this background the Vienna negotiation appears as a tragic melodrama. It put the spotlight on Iran, which does not possess nuclear weapons and whose civilian nuclear program is verifiable, but it leaves aside the dramatic reality of the nuclear arms race. This was done to convince the public that, with the Iranian nuclear agreement, "Our world is safer."