The United Kingdom and France are bombing Daesh in Syria

Contrary to their public declarations, the United Kingdom and France are participating in the anti-Daesh Coalition bombing of Daesh in Syria.

The two European states pretend that until now, they have only been implicated in Iraq. However, a document from the UK Minister of Defence, obtained by the association Reprieve, attests to the engagement of Her Majesty’s Armed Forces. And the intervention of the Minister of Defence, Michael Fallon, responding to opposition criticism in the House of Commons, leaves little doubt about the French presence.

From his side, the Coalition spokesman has denied that his staff is coordinated, directly or indirectly, with the staff of the Syrian Arab Army. However, this declaration, which was intended to maintain the honour of London and Paris, who are still opposed to Damascus, was contradicted by the PYG spokesman (Syrian Kurds). According to him, the coordination between the two military staffs is supplied by the Syrian Kurds, who warned Damascus about the Coalition flight plans, guaranteeing that their planes may fly without being shot down. 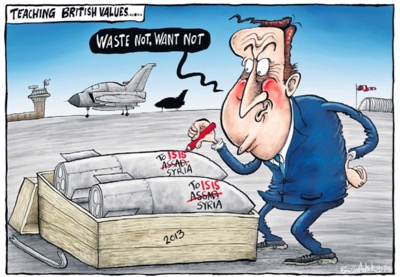