Economic relations between China and Latin America are living increasing tensions. As a result of deflation (fall in prices) on a global scale, the South American region is suffering the consequences of concentrating the bulk of its exports to China on commodities. However, the opening of the first yuan financial center in Latin America, in Santiago de Chile, agreed during Prime Minister, Li Keqiang’s visit, is bound to attract a number of technological investments which could drive peripheral industrialization and decrease the dollar’s dominance in Southern Cone countries. 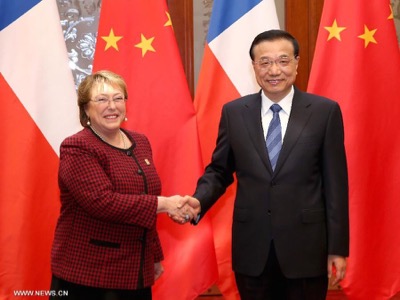 During his visit to Brazil, Colombia, Peru, and Chile, the Prime Minister Keqiang advanced Chinese influence in Latin America by fulfilling 2 fundamental goals: transforming the region’s economic map to underpin Chinese prominence, and driving the yuan’s prominence on South American territory with Santiago de Chile as the launching pad.

The first goal was accomplished with Brazilian and Peruvian Governments by means of an agreement to build more than 5,000 kilometers of railway lines which shall connect the Atlantic and the Pacific with the aim of increasing the size and speed of trade with China [1].

This “Silk Road” thus extended to South America [2] would be an alternative to shipping transit through the Panama Canal (under American control for decades) and, at the same time, would supplement the capabilities of the also planned Nicaragua Canal.

Chinese funding is prominent in both canals’ construction projects, as a result of the country’s interests in the supply of strategic commodities (oil, metals, minerals, etc.), and its privileged trade links with Managua and South American markets, even ahead of the US and Europe.

Nonetheless, the increase in the trade flows between China and the Latin American region, especially since China joined the World Trade Organization (WTO) in 2001, bears no relation at present with the incipient use of the yuan.

While trade with China multiplied by 22 between 2000 and 2014, according to the UN Economic Commission for Latin America and the Caribbean (ECLAC) [3], from 2009 onwards ‘swap’ agreements (‘currency swap’) agreements were signed only with Brazil and Argentina in order to promote yuan transactions among enterprises (through central banks). Not even the biggest exporters of oil and minerals of the Asia-Pacific region, such as Venezuela and Peru, managed to build financial cooperation links with Beijing.

This explains the importance of this second agreement reached during Li Keqiang’s tour: Chile, the first South-American country to recognize China in the diplomatic arena 45 years ago and to subscribe a Free Trade Agreement (FTA) with the country in 2005, will now be the main player in the launch of the yuan’s first financial center in Latin America, thanks to the adoption of 3 key agreements.

Firstly, the Chilean government was qualified by the Chinese authorities to take part in the Renminbi Qualified Foreign Institutional Investor (RQFII) program. As a result, Chilean banks, pension funds, insurance companies, and mutual funds will have the opportunity to invest in the Chinese capital market [4] up to a limit of 50 billion yuan (8.1 billion US dollars).

Secondly, an agreement was reached to open a clearing bank in the “people’s currency” (‘renminbi’) in the Americas, after the first one opened in North America, namely in Canada [5]. With an initial investment of 189 million US dollars and under the supervision of the Chinese Construction Bank (CCB), Chile and the Asian giant expect to decrease the cost of their transaction (credit operations, foreign trade payments, etc.) and it will facilitate currency exchange.

The CCB is a worldwide entity that has made operations outside of China for more than 7 trillion yuan and over 19,000 clients. With several branches already operating in Chile, it plans to extend its financial services to all other South American countries [6].

And lastly, an agreement was signed between Chile’s Central Bank and the People’s Bank of China to open a foreign-currency credit ‘swap’ line for 22 billion yuan (3.5 billion US dollars) which on one hand should cushion the effects of the dollar’s volatility in trade and investment flows and, on the other hand, should help the Chilean peso and the yuan gain ground in the billing of their bilateral exchanges [7].

“We hope that Chile-China cooperation in the financial arena will drive industrial and investment cooperation between China and the whole of Latin America”, emphasized Li Keqiang during his visit [8]. His statement reflects the increasing concerns among wide sections of left-wing politicians about the kind of relationship led up to now with the Asian dragon: exports and capital inflows focused on products and activities of the extractive industry.

It is a fact that, after the downturn in commodity prices and the dramatic slowdown of emerging markets, China’s muscle does not suffice to trigger an economic revival in Southern Cone countries.

Despite all of this, China’s government has expressed their readiness to further the terms of their economic links with Latin American countries [9]. Quoting poets Pablo Neruda and Xin Qiji, the Chinese Prime Minister argued in ECLAC’s headquarters that “nothing will stop the river of dawn” and that “its waters shall flow towards the Orient”.

To succeed in this commission, he called for the urgent need to increase technological investment to better help the creation of high added value regional chains that, in turn, can transform South America’s growth model.

In this sense, setting up the yuan’s first financial hub in Latin America, namely in in Santiago de Chile, become a de facto laboratory for a huge challenge on the part of Beijing’s officials: on one hand, to finally allow for peripheral industrialization and, on the other hand, to strengthen the yuan’s internationalization with the support of South American governments.

Chilean Miners : What was the TV Show hiding?