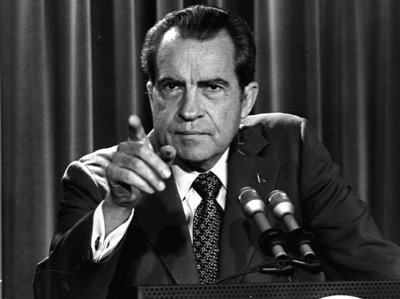 Forty-four years ago, President Nixon effectively destroyed the successful system of fixed parities and gold settlement which had been created under the direction of Franklin D. Roosevelt at the international conference of Bretton Woods, New Hampshire in 1944. The Bretton Woods system was the most effective monetary arrangement in world history before or since. If the Bretton Woods fixed parities and narrow bands of fluctuation had been maintained, currency risk would have been kept to a minimum, and devices like the euro might not have been necessary. The world has been living amid the unstable rubble of Bretton Woods for these last 44 years. For full recovery from the current world economic depression, a new universal monetary conference or Bretton Woods II is required. Measures like China’s devaluation of the yuan this week can easily destabilize a very weak world economy.

Thierry Meyssan, founder of the Voltaire Network organization and website, is a leading authority on world affairs. This week he reports on the secret US-Iran protocols linked to the public Iran nuclear accord, which the US Congress will vote on in September.

Meyssan argues that the secret agreements for US-Iranian cooperation will shift the center of warfare out of the Middle East north into the Black Sea, as part of the US return to a Cold War posture towards Russia in Ukraine and elsewhere. He adds that an included aspect might be less reliance by Washington on mini-states, micro-states, failed states, and war lords, and more use of traditional state vs. state confrontation.