Whatever happens, Washington will win in Syria, because the United States has not one, but two different policies with regard to this country. Either there will be peace, and President Obama will be praised for having successfully negotiated with Iran ; or else the Syrian Arab Republic will be destroyed and occupied by NATO, and a few US generals and NATO will be praised for having brought an end to the bloodbath. Here, Thierry Meyssan reveals the underside of this double policy, in particular the plot that was hatched by the NATO Deputy Secretary General for Political Affairs. 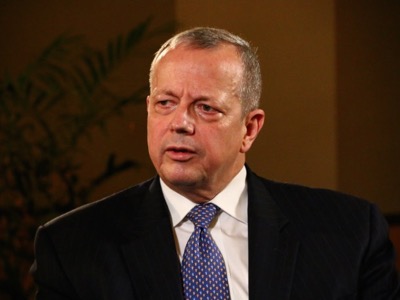 The application of the agreement reached between Washington and Teheran, on the 14th July, 2015, depends mainly on President Obama’s capacity to convince his fellow-citizens, and particularly the Congress of his own administration, to accept it. Here, however, he will be faced with two major obstacles.

On the one hand, there is a political current which remains favourable to the Juppé-Wright project for the creation of a Sunnistan and a Kurdistan straddling the borders of Syria and Iraq. It is organised around General David Petraeus, who was director of the CIA until Obama’s re-election in October 2012, and is currently chief analyst for the Kohlberg Kravis Roberts investment fund. The group includes his ex-deputy, General John Allen, current special Presidential envoy in the fight against Daesh, and ex-Secretary of State and present Democratic candidate, Hillary Clinton. Petraeus also enjoys the support of certain members of the Republican Party, like the current President of the Senatorial Commission for the Armed Forces, John McCain, and the real estate promoter and main candidate for nomination, Donald Trump.

At the end of July, General Allen was invited to the Aspen Security Forum. There he met journalists from the New York Times to whom he secretly confided that he had reached an agreement with Turkey to create a safety zone in northern Syria. Astounded by this decision, which violates the United Nations charter, Eric Schmitt decided to dedicate the front page of his newspaper to it [1]. However, after a few days of contradictory public announcements, Washington and Ankara denied the story [2]. Immediately afterwards, the White House clarified its position : the priority is the fight against Daesh. In this fight, they are allied with the « moderate Syrian rebels » and also the YPG (a Marxist-Leninist Kurdish group) - consequently, although Turkey was authorised to attack the Turkish branch of the organisation, it was asked not to attack these groups [3].

On the 29th July, the « army » of sixty CIA-trained « moderate Syrian rebels » entered Syrian territory to ground-mark Daesh positions for Coalition bombers. But al-Qaïda had been informed, and attacked the « rebels », taking twenty prisoners including their chief, Colonel Nadim Hassan. They could only have been betrayed by the US army.

Although Turkey was at first the prime suspect, suspicion was transferred to the United States after vehement denegations by the Interim Prime Minister, Ahmet Davutoğlu [4]. And who else in the US army could it have been, except for General Allen’s group ?

General Allen’s manœuvres first of all provoked a serious incident between the Pentagon and the Turkish army. The Turkish liaison officer to the CAOC (Combined Air and Space Operations Center) issued warning only ten minutes before the raid in Iraq, thus endangering both the Kurdish trainee soldiers and their US instructors, who were present in the area [5]. The path chosen by Recep Tayyip Erdoğan, should the AKP stay in power, could lead to a partial breakdown in relations between Washington and Ankara [6].

Above all, these incidents led the Pentagon to ask CentCom to check the allegations - which are wide-spread in the Near East – claiming that the Coalition is not bombing Daesh, but on the contrary, supporting it. This was also the moment chosen by the Defense Intelligence Agency to denounce the fudging of CentCom reports [7]. It seems that CentCom is commanded by another ex-collaborator of General David Petraeus, General Lloyd James Austin III. 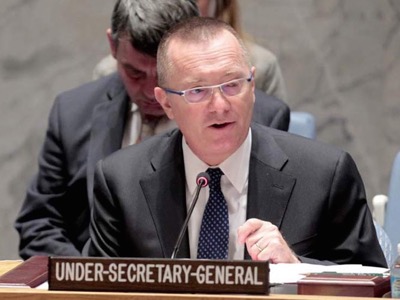 Obama’s other problem is the United Nations General Secretariat. While it is difficult to know to which movement Ban Ki-moon belongs, since he is too busy making money from his position, the same is not true of his Deputy Secretary for Foreign Affairs, Jeffrey Feltman.

Before becoming an international civil servant, he was a United States ambassador, specialising progressively in the Near East. In particular, he was posted to Israël, Iraq (where he administered for the Kurdish party) and Lebanon (where he imposed his ideas on the Siniora government ). He enjoyed a rare relation of confidence with the Secretary of State of the time, Condoleezza Rice, with whom he shared a weekly video-conference, and then was nominated by Secretary of State Hillary Clinton to work with Rice in Washington and supervise all policies touching the Near East.

Jeffrey Feltman organised the 2005 assassination of the ex-Prime Minister of Lebanon Rafic Hariri, then Detlev Mehlis’s Inquiry Commission, and then the creation of the Special International Tribunal for Lebanon. This hybrid structure was formed to convict the Presidents of Lebanon and Syria, Emile Lahoud and Bachar el-Assad, on the basis of paid, false testimony, but the accusations collapsed once the truth was known. Mr. Feltman continues to work against Syria and Iran in his new post.

Arriving at the United Nation just before the Geneva Conference 1 on Syria, Feltman did his best to sabotage the agreement between his country and Russia, and joined the Petraeus group to push France into re-starting the war. He drew up a plan for the total and unconditional surrender of the Syrian Arab Republic. The sovereignty of the Syrian People must be abolished ; the Constitution must be revoked ; the President must be relieved of his duties ; the Peoples’ Assembly must be dissolved ; 120 Syrian leaders must be arrested and judged and convicted ; the Direction of Military Intelligence, the Direction of Political Security and the Direction of General Security must be decapitated or dissolved ; the « political prisoners » must be freed and the anti-terrorist courses must be stopped.

After the failure of the Lakhdar Brahimi’s mission, Feltman asked Ban Ki-moon to nominate the Italian Steffan De Misruta as his representative in Syria. He had met this elegant diplomat in Iraq, and forged close ties with him during their missions in Lebanon. De Mistura had also frequently met with Petraeus and Allen during his mission as a representative of the General Secretary of the United Nations in Afghanistan.

From then on, while meeting the different parties in the conflict with bountiful smiles, Stefan De Mistura buckled down to imposing Feltman’s surprise plan for Syria. On the 29th July, 2015, with Ban Ki-moon, he presented the broad outlines of his « peace » plan to the Security Council, but neither of them provided the slightest written text [8]. They politely asked the Security Council to push the protagonists to sign an Interim Agreement, then left them to deal with it. In reality, the agreement was intended to withdraw the Council’s prerogatives, to force the Syrian Arab Republic to sign a vague text which would have allowed NATO to occupy Syria, and authorised Messrs. De Mistura, Feltman and Ban to organise her capitulation according to the process elaborated in 2012 by Feltman.

This skillful manœuvre almost worked, because on the 17th August, the Security Council adopted a strange declaration (not a resolution) of support for Stefan De Mistura [9]. Contrary to all practices, the text was first of all discussed in private by the five permanent powers. Russia, worried that something was being prepared in secret, decided to vote « yes ». It feared that Washington may be preparing an action out of the bounds of the Security Council and International Law. However, the Venezuelan ambassador Rafael Ramírez, who been kept absent from the writing of the declaration, cautiously raised two objections : first of all, the Geneva Communiqué 1 [10], which is supported by everyone, in fact violates the United Nations Charter ; secondly, it’s not enough to declare that you are fighting terrorism, you must also help the Syrian Arab Republic in their fight against al-Qaïda and Daesh. You must stop indirectly supplying these organisations with arms, and stop creating and activating pseudo-rebel groups.

So it was an old companion of Hugo Chávez, not the Allies, who was on the same wavelength as President Barack Obama.

How the administration of the UNO is organising the war

Feltman confirmed at the UN

The 5th Chinese Veto and the 6th Russian veto on Syria

The Secret of the Peace