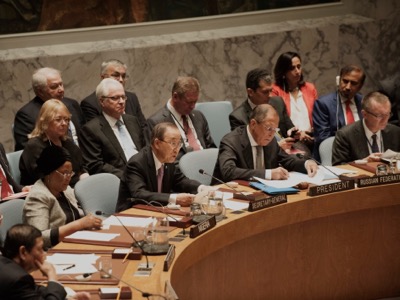 Maintenance of international peace and security:
settlement of conflicts in the Middle East and North Africa
and countering the terrorist threat in the region

The Middle East and North Africa region has entered a period of instability and potential conflict marked by increased tensions over internal politics, socioeconomic, ethnic, religious and generational factors, and divergent world views. A number of States face a threat to their unity, territorial integrity and independence. Many countries in the region have been targets of terrorist aggression. As these factors represent a challenge to the system of international peace and security, dialogue among civilizations and the non-proliferation regime for weapons of mass destruction, they require urgent responses. New crises have arisen to join conflicts of long standing.

The lack of a genuine negotiation process and the status quo that has persisted for years in the Palestinian-Israeli conflict are further aggravating the situation. The unresolved Palestinian issue is causing sporadic outbreaks of violence around the Gaza Strip and recurrent violence in the West Bank. The stalemate in the Middle East and the question of the final status of the Palestinian territories, not yet resolved on the basis of a universally recognized international legal framework, foster radicalization in the “Arab street” and create fertile ground for the spread of terrorist views.

The situation in Iraq since 2003 has unfolded so adversely that the country has been, for all intents and purposes, torn asunder, with some parts of its territory now strongholds of international terrorism. This, in turn, has led to religious confrontation, an extremely dangerous trend. Only sustained collective efforts by the international community, supported by the Government of Iraq, to counter Islamic State in Iraq and the Levant, as well as Al-Qaida and associated groups, are capable of eliminating the challenge of terrorism.

The bloody Syrian conflict has created fertile ground for the consolidation in part of the country of a terrorist “caliphate”. There is no military solution to the conflict. The way to resolve it is through a Syrian-led political process based on the 2012 Geneva communiqué, with the Syrian parties and the regional and international community joining forces to effectively counter the serious terrorist threat, on the basis of rejection of double standards and respect for the principle of national sovereignty.

The events of 2011 continue to exercise a grave impact on Libya. To achieve a settlement and effectively counter the growing threat of terrorism requires the establishment of a national reconciliation Government and mandatory consolidation of the army and security structures, with appropriate international support.

The situation in Yemen has deteriorated severely. In view of the need to counter the terrorist threat in that country, action on the ceasefire and the launch of the political process under United Nations auspices is urgently needed, as well as prompt measures to remedy the humanitarian situation.

The purpose of the debate

There is a need for a comprehensive analysis of the nature of the conflicts in the Middle East and North Africa that includes identification of areas for collective work on the basis of the Charter of the United Nations.

Only by adhering to the norms and principles of international law can we restore confidence in the future in the Middle East and North Africa, put an end to the shredding of its sociocultural fabric and revive confidence in relations among States and religious and ethnic groups.

The Security Council should play the key role in harmonizing collective approaches, based on respect for the diversity of cultures and civilizations in the modern world and the democratization of international relations, and it is the Council that must develop ways to understand the full range of security challenges in the Middle East and North Africa.

Current realities dictate the need for a comprehensive approach to conflict prevention and the establishment of a lasting peace, an approach that includes measures to eliminate the causes of conflict. Interaction among all members of the international community must involve a quest for a common understanding of both the causes of the current profound security crisis in the region and of the political and other factors aggravating the crisis. Only such an understanding, worked out within the framework of the Charter of the United Nations, can lead to the implementation by the international community of agreed measures to prevent escalation of the conflict and terrorist activity in the region. Interference in the internal affairs of States, the use of force in defiance of the Security Council and the provision of arms to non-State groups and factions professing radical ideology exacerbate the situation in the region and increase the risk of terrorism.

Instability factors and courses of action

Most of the conflicts in the Middle East are exacerbated by the terrorist factor. The very existence of certain States in the region is threatened. Terrorists take control of territory, establishing on it their own quasi-administrations and interacting with the public according to laws and regulations promulgated by extremists. The aims of Islamic State in Iraq and the Levant are territorial expansion and the establishment of a terrorist “caliphate”.

Islamic State in Iraq and the Levant, the Nusra Front, Al-Qaida and other related entities operating in the Middle East and North Africa have the support of global recruitment networks, spread extremist ideology virtually unchecked using modern information and communication technologies and especially the Internet, and are funded from sizeable and diversified criminal sources. Primary among these are the illicit trade in oil and other mineral resources, illicit trafficking in drugs, weapons and cultural property, and voluntary contributions from extremist sympathizers.

One dangerous tendency, the movement of foreign terrorist fighters into the Middle East conflict area (Iraq, Syria, Libya and Yemen), further complicates resolution processes. It must be noted that existing procedures for information-sharing among States and mechanisms for mutual legal assistance in criminal matters and extradition are not yet commensurate with the level and nature of the threat posed by foreign terrorist fighters and do not support an effective response to this phenomenon.

Countering incitement to terrorism and preventing the spread of terrorist ideology are very important areas of conflict resolution efforts.

This task has acquired a new dimension in the context of countering the influx of foreign terrorist fighters. This problem will not be resolved merely by encouraging tolerance and providing good governance or through counter-messages. The spread of terrorist ideology, especially through modern information and communication technologies and the Internet, must be countered resolutely.

The risk of weapons of mass destruction falling into the hands of non-State actors, especially terrorists, must be further assessed, in particular in the light of information on the use of chemical weapons by Islamic State in Iraq and the Levant.

There is a need to consider ways to step up implementation of the counter-terrorism resolutions of the Security Council, and additional measures to be taken in that regard.

Above all, there is a need to focus on aiding the legitimate national Governments that are fighting terrorism on their territory. The approach should be comprehensive and free of double standards. Given the interconnectedness of the Middle East conflicts, assisting some Governments while ignoring others, or, worse yet, criminalizing them, exacerbates destabilizing trends.

Joint efforts were needed to support the good offices of the Secretary-General on various issues relating to the Middle East, as well as the mediation efforts undertaken by regional organizations and individual Member States.

Steps to implement the Arab Peace Initiative and the Joint Comprehensive Plan of Action on the Iranian nuclear programme are deserving of particular attention, as are other internationally agreed frameworks for action to improve the situation in the Middle East.

Middle East conflicts are characterized by a flagrant disregard for human life and indiscriminate attacks on civilians. Terrorist acts motivated by hatred of particular religions and faiths are becoming increasingly frequent.

Resolving this problem requires a set of coordinated measures to counter extremist ideology at all levels.

There must be a heightened focus on promoting a culture of peace at the national, regional and international levels, on addressing the issue of the “lost generation”, especially in countries where terrorism has a significant presence, and on promoting peace and non-violence.

The Middle East conflicts result in large-scale suffering and loss of life, and severe financial and economic consequences for the countries in conflict and their neighbours.

Development, peace and security and human rights are closely linked. Activity in these areas is cumulative and must be approached in a holistic and comprehensive way.

Concern for preserving and developing solid, stable and strong national institutions, including security services, should be the cornerstone of international efforts to assist States in the Middle East and North Africa.

Issues relating to internally displaced persons, refugees, migrants, rehabilitation of infrastructure and the preservation of cultural heritage sites must be urgently addressed. These issues and that of assistance to States of the region should not be addressed selectively. Unilateral sanctions and embargoes do not contribute to the objectives of settlement. Moreover, in most cases, their hasty application signifies reluctance to seek a settlement by peaceful, diplomatic means.

• What are the reasons for the increased potential for conflict in the Middle East and North Africa?

• What conclusions can be drawn from a comparative analysis of the origins and development trends of conflicts in the Middle East and North Africa after the so-called Arab Spring?

• What needs to be done to prevent conflicts in the region, including those arising on the basis of religion or ethnicity, and to ensure the protection of religious and ethnic minorities there from radical extremists?

• What is required to ensure true synergy in the efforts of all States in combating the terrorist threat?

• What can be done to continue the joint strengthening of existing mechanisms and building of new ones to counter at the international level the phenomenon of foreign terrorist fighters?

• What can be done to secure the compliance of each and every State with the objectives set out in Security Council counter-terrorism resolutions?

• What is the role of the United Nations and its component bodies in curbing terrorist threats in the Middle East and North Africa and in countering incitement to terrorism and the spread of terrorist ideology? Is there potential for increasing counter-terrorism coordination within the United Nations system?

Outcome of the debate

It is proposed that the Council adopt a presidential statement in which it stresses the urgency of adopting measures to resolve and prevent conflicts in the Middle East and North Africa, and sets out possible further steps to reduce terrorist risks in the region.