Why is the West So Silent About The Yemeni War?

Anthropologist Martha Mundy denounces the silence of the main powers on the war in Yemen. She recalled the challenges that this country represents for Saudi Arabia and Israel. 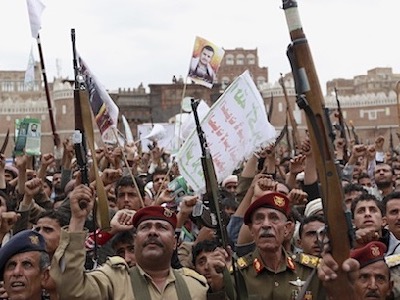 What is at stake in Yemen that far more systematic violations of the Geneva Conventions than in any of the recent wars which Western powers have supported in the Arab world (Iraq, Syria, Libya and Gaza) are met with resounding silence?

For six months there has been a blockade of food and fuel, and management of aid (even that through the UN) as part of war strategy, bombing of civilian, historical, educational, religious and medical targets, destruction of infrastructure from roads to electricity and water, and use of prohibited weapons.

All of this occurs in a country of over twenty million persons, which has no effective air defences – a country as open to aerial bombardment as Gaza. Yet as an Israeli Foreign Ministry official has pointed out, the principles of international humanitarian law systematically violated in Yemen are those invoked by UN bodies, governments, the Western media, and civil organisations when they charge Israel with the commission of war crimes in Gaza.

In other words, by its silence and support for Coalition bombing in Yemen, the international community completes the erasure of legal reference in war.

That is a big price to pay for success in a conflict seemingly so minor it receives virtually no press coverage.

How is the conflict explained to us? Spokesmen of Western governments state that a militia movement (Ansarallah) took over the capital forcing out the legitimate government. Thus, as upholders of ‘legitimacy,’ the UNSC (minus Russia) judged it vital to reinstate the earlier government, even though the bulk of the Yemeni national army came over to the side of the mundaydomesticgovAnsarallah, itself with a substantial popular base in Sanaa and the north. This is evident. But rarely are we reminded that a year ago, under UN auspices a political agreement (‘Peace and National Participation’) was co-signed by the Ansarallah and other Yemeni parties, only for the UN representative to be fired, another appointed, political discussions with the Ansarallah movement terminated, and a military Coalition assembled to reinstate ‘legitimacy’ inside Yemen.

As the Coalition has gone on to destroy not only Yemen but law itself, surely continuing political negotiation would have been a lower price to pay?

Why was it not?

Could it really be that some words just should never be uttered? For example, Ansarallah’s slogans call for ‘death to America and Israel.’ That slogans against America and Israel resound in the streets of a capital city, even of a small, poor, peripheral Arab country, doubled by curses on the Saudi monarch since the bombing began, clearly is unacceptable to the powers concerned. (More gratuitous and offensive to this writer is the puerile call for curses on Jews, who so long formed a component of Yemeni society, and so few of whom remain there.) But are America and Israel sacred terms that no one should ever decry?

And, slogans aside, the fact remains that Ansarallah is a religio-political movement which, unlike al-Qa`idah or Da`ish, works with secular political parties, including the Yemeni Socialist Party, and time and again negotiates politically, most recently accepting the basic clauses of the UN Security Council Resolution 2216, which the Coalition gives as the basis for its attack to restore ‘legitimacy.’

So what else is at stake that the Coalition has been left to bomb for six months to the sound of world silence?

Is it just money? Obviously Saudi Arabia (with more British airplanes than the British army) and the GCC can buy a lot of media, weapons, and people. Yet the support of the US, France and the UK to the Coalition goes beyond what money can buy, even today. So what else is at stake?

The French, who are facilitating the naval blockade, still have a base in Djibouti. It allows them to continue as players in a global network (Diego Garcia and 1400 US overseas bases) expanded from the days of the Cold War. Today, Djibouti’s major function may be not just above, but under, water: to watch the communication cables, which pass between China, Asia and the West that lie on the sea bed. Although all that visitors to Djibouti may see are French army frogmen diving to check the cables, there must be wider coordination with the Israeli submarines patrolling in the Red Sea.

The Coalition is meant to be the first exercise of a GCC ‘rapid deployment force’ advised discreetly by Israeli and American officers [1]. Such coordination in the attack of an Arab country is novel. How has this been marketed? The rage provoked by the deaths of the invading GCC forces in Mar`ib suggests that Yemen was dreamt of as a training programme for wars modelled on recent Israeli ones – a war to be determined by aerial bombardment, but without the international outrage at war crimes that Israel suffers.

Yemen as a laboratory for new wars? It seems bizarre since, compared to Gaza, Yemen is far larger, intelligence mapping of the population far poorer, and there is still something of a ground army standing. But if one remembers how Yemen has served as a laboratory for US drones, including targeted assassination of a US citizen, perhaps it was so marketed.

Indeed there is something glossy about the way the war was sold to the GCC leaders (GCC minus Oman which refused to participate) even if we, the general public, haven’t seen the brochures. For the Emiratis it was to lead to ‘the City of Light’ (al-Noor Yemen) of booming commerce on the Indian Ocean and open to East Africa but subject to the management choices of Dubai. To the Saudi very much more was promised: unified control of ‘The Empty Quarter’ and its fabled unexploited quantities of oil and gas which the US guarded in the ground so long as the government was Yemeni; practice in making and unmaking societies and governments by precision bombing of a population dependent on food imports; and a victory so stunning, the Arabian Peninsula becoming effectively theirs, that peace with Israel could soon be publically celebrated.

In early June at a Council on Foreign Relations event, retired Major General Anwar Eshki of Saudi Arabia laid out the package [2]. He was joined at the event by Ambassador Dore Gold of Israel. What Eshki said is not news in Saudi Arabia. But it is not often spoken out aloud, and certainly not reported with any measure of diligence in the West. Here is Eshki’s package:

“In the Arabian Peninsula, there is a promising oil field in the Empty Quarter [Rub’al-Khali] that will obligate the countries of the Gulf Cooperation Council and Yemen to cooperate to protect it and its gains. This unity will be modeled—or rather, must be modeled—on the U.S. constitution that united America and granted it its democracy. As for the promising Ogaden [oil] field in Ethiopia, it will unite the Horn of Africa under Ethiopia’s leadership. And a bridge shall be built between the African continent and the Arabian Peninsula: The Al-Noor Bridge that shall connect the city of Al-Noor in Djibouti and the city of Al-Noor in Yemen”.

All this demands a number of things:

Achieving peace between Arabs and Israel.

Changing the political system in Iran.

Unity of the Gulf Cooperation Council.

Achieving peace in Yemen and revitalizing the port of Aden because this will rebalance the demographics of employment in the Gulf.

Establishing an Arab force with American and European blessing to protect the countries of the Gulf as well as the Arab countries and to safeguard stability.

The speedy establishment of the foundations of democracy with Islamic principles in the Arab world.

Working toward the creation of a greater Kurdistan in peaceful ways as this will weaken Iranian, Turkish, and Iraqi ambitions.

Why is the West so silent about Yemen? Perhaps these seven points provide the elements of an answer.

Source : “Why is the West So Silent About The Yemeni War?”, by Martha Mundy, Counterpunch, Voltaire Network, 4 October 2015, www.voltairenet.org/article188931.html

Anthropologist. She worked in North Yemen from 1973 to 1977. Her book, Domestic Government: Kinship, Community and Politics in North Yemen (1995), is a contemporary classic. She is now working on the political economy of food in Yemen.

Source : “Why is the West So Silent About The Yemeni War?”, by Martha Mundy, Counterpunch , Voltaire Network, 4 October 2015, www.voltairenet.org/article188931.html