The firing of cruise missiles by the Russian Navy, from the Caspian Sea, was not necessary for its military operation in Syria. However, this convincing show of force, demonstrates Russia’s technical superiority over NATO in this domain. Therefore, the so-called anti-missile shield, currently deployed by the Atlantic Alliance around Russia, is now obsolete.

Last week the biggest event that took place in Syria as part of «Operation Hmeymim» [1] was the use by the Russian Navy’s Caspian Flotilla of 26 seaborne land-attack cruise missiles (LACMs) that hit 11 Daesh and Jabhat al-Nusra military targets inside Syria, which were located about 1,500 km. away from the missile launch site.

A massive blow using Kalibr-NK LACMs was struck from the southwestern Caspian Sea [2]. The objects of the attack were factories producing shells and explosives; command posts; ammunition, weapon, and fuel depots; and terrorist training camps in the Syrian Governorates of Raqqa, Aleppo, and Idlib. The cruise missiles, with a Circular Error Probable of about three meters, hit every one of their targets that had been set two days earlier.

The Dagestan, a missile-armed frigate with a displacement of about 2,000 tons, acted as the flagship of the Russian naval assault force accompanied by the small missile patrol ships the Veliky Ustyug, the Grad Sviyazhsk, and the Uglich (with a displacement of about 1,000 tons). Kalibr-NK missiles are extremely difficult to detect: when maneuvering, an LACM flies at high speed in stealth mode, meaning that it emits no signals that would allow it to be tracked by radar.

Russia informed the leaders of Iraq and Iran about the trajectory of these missiles. And in order to ensure the safety of civilians, the LACMs’ flight path was routed over an uninhabited area.

The military and political implications of the launch

This was the first time that Russia’s armed forces had deployed this type of weapon in an actual combat situation —not during exercises— at targets that were so far away. The second important point is that every one of the 26 missiles that were launched struck their intended targets, none deviated from their previously calculated trajectory, not one experienced a technical glitch, and none fell to earth while still on its approach to the object of the attack. (CNN’s incorrect report about four missiles crashing in Iran has been discredited, not only by Russian and Iranian sources, but also by State Department and Pentagon speakers [3]). Some targets were dealt a double blow. 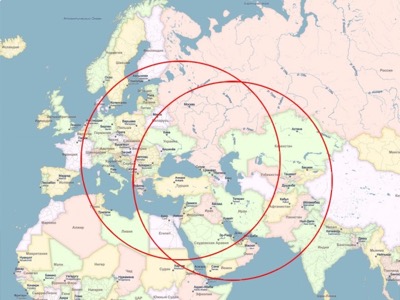 Thanks to a successful Caspian Operation, the Russian Aerospace Defense Forces have added an entirely new and quite significant element to their air-combat capabilities in Syria. The most important feature of an LACM is that it strikes instantly and with unparalleled accuracy. They have a hugely demoralizing effect on the enemy, because even if the moment of launch is detected, he can not even predict in what geographic area they will hit. True to form, the US persists in demanding that Moscow ban such missiles, insisting that they violate the Intermediate-Range Nuclear Forces Treaty (but in fact that treaty prohibits only land-based LACMs).

This initial real-world use of long-range LACMs by Russia has significant strategic importance, because the carriers of such systems (surface vessels and submarines), stationed elsewhere in the ocean, can minimize the potential use of nuclear weapons and offensive antiballistic systems by those states that still consider the Russian Federation to be their “biggest potential enemy,” an “aggressor state,” and an “annexing state.” These high-impact weapons systems could be used for preemptive or retaliatory strikes with both nuclear or non-nuclear warheads.

Also, the landlocked Caspian Sea takes on strategic importance for Russia, because from there Russia can inflict surgical strikes using LACMs at the whole Middle East region, without risking countermeasures from NATO’s naval forces.

Now that the Russian armed forces have debuted such high-precision weaponry, the Pentagon can stop throwing away its money trying to build up its military options that are aimed squarely at Russia. In other words, there is no need to spend significant amounts to station American tactical nuclear weapons in Europe or to deploy its land- and sea-based antiballistic infrastructure in Romania and Poland —or in the Asia-Pacific region— since it is perfectly clear that from now on all of that will stay in the cross-hairs of not only Russian LACMs, but quite soon of some even more effective hypersonic, high-precision long-range weapons equipped with non-nuclear warheads.

One might hope that not only the Islamic State, but also Washington and NATO will arrive at immediate, tactical, and deeply strategic conclusions based on the Caspian Operation and will thus end their threats to use force against Russian aircraft and will understand that although they cannot be friends or “strategic partners” with Moscow, they must live in peace.

US-NATO’s Cold War 2.0 With Russia. How to Reverse the Tide of Global Warfare?