Ankara massacre (86 dead and 186 wounded, 10 October 2015) was not claimed. However, given the prior determination of the PKK to declare a cease-fire during the election period, the willingness of President Erdoğan to scare his own electorate, and the criminal past of the Turkish Deep State, there is no doubt for Savvas Kalenteridis that the responsibility goes to Ankara. 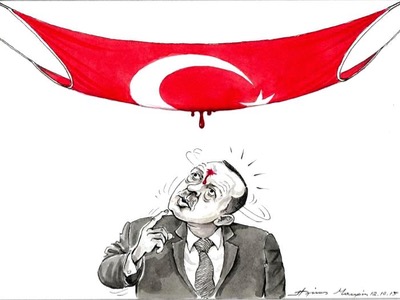 It was May 24 1993. A truck was carrying unarmed soldiers from Malatya to Bingöl. 10 miles before its destination it was stopped by PKK rebels led by Semdin Sakik and the soldiers were taken prisoners. During the early morning hours 33 of the prisoners were executed, an action that led to public mourning and the eruption of nationalistic and chauvinistic fervor in the Turkish community against the Kurds and the PKK.

A series of facts proved that behind this heinous crime was the Turkish state. The truck in subject had no escort, a fact which was highly unusual. Semdin Sakik who later gave himself up to the Turkish state and betrayed very important and vital secrets of his organization to the Turkish authorities, maintain close relationships with the infamous Yesil (Mahmut Yıldırım), a Sunni Kurd, agent and hitman for the Turkish secret services, who alerted him for the destination of the truck and guided him in executing the unarmed soldiers, an action that is against the moral code of the PKK.

According to independent witnesses, the crime of execution of the 33 soldiers was designed by the Anti-Terror Service (JİTEM), which is a traditional stronghold for the secret state apparatus, to create a wave of reaction in Turkish public opinion against PKK, to put pressure to the government and the armed forces, in order to initiate military operations against PKK and put an end to the unilateral ceasefire proclaimed by Abdullah Ocalan in March 20, 1993, which was made in agreement with the President of Democracy at the time, Turgut Özal.

It has to be mentioned that the ceasefire of March 20 was extended by two months by Ocalan with a new declaration he made in April 15, and always in agreement with Turgut Özal, and having Jalal Talabani as their diplomatic middleman.

For those who maintain even the slightest of doubts for the role of the secret state apparatus of Turkey in the case, and for as to how much bothersome the ceasefire was that aimed to the political solution of the Kurdish issue, we only have to say that two days after the second declaration by Ocalan to extend the ceasefire, Turgut Özal was murdered, poisoned by the secret state apparatus (April 17, 1993).

Because the PKK decided to comply with the ceasefire, the secret state apparatus went on with the execution of the 33 unarmed soldiers in May 24, which was blamed to the PKK to provoke the strong military operations against it by the Turkish military, thus ending the unilateral ceasefire.

What led to the massacre of October 10 in Ankara

In October 9, 2015, Gemik Bayik, one of PKK’s leaders, stated that the PKK is ready to declare unilateral ceasefire to counter the belligerent atmosphere in the part of Kurdistan occupied by Turkey, during the election season and the election day of November 1st.

The official declaration was to be made by Murat Karayilan, the military leader of PKK on Saturday, October 10 2015. At the same time the Kurdish movement had scheduled a peace rally to Ankara along with other public organizations. But the duo of Erdogan and Davutoglou had “built” all their pre-election campaign to a belligerent atmosphere that was bringing the nationalist and conservative voters to the AKP and was keeping the peaceful Turks away from the polls - the same people who have voted by the thousands in favor of the Party for the Democracy of the People (HDP) in the elections of June 7, 2015. This was also the goal of Erdogan when he ended the long time peace and began fighting the PKK in mid July 2015. The goal was these votes, to ensure a clear win for his party, the AKP, and to make himself a new sultan, in the footsteps of Saddam Hussein and Muammar Gaddafi.

A way had to be found to counter the peace movement and the ceasefire so as not to influence the voters. The war that he himself started, through his own decision, in mid-July, which cost the life of hundreds of Kurds and Turks, had to go on unabated. To this end, the agents of the secret state apparatus, the Sunni Kurds who were recruited by the Turkish authorities in 2013 and 2014, from the city of Adiyaman, to join the Islamic State and turn against their Kurdish brothers of the PKK, executed the mission as suicide bombers in the brutal massacre at the railway station of Ankara.

And what is the tragedy of this case?

The suicide bomber in Ankara, is probably Yunus Emre Alagöz, the older brother of Şeyh Abdurrahman Alagöz, who, also as a suicide bomber, killed 33 young Kurds in Suruc, in July 20, 2015 after which the Turkish state began its war against the PKK.

This is Turkey and this is the Turkish state. Strongly barbaric and brutal towards its “enemies”.

We do hope that the people now “flirting” with the representatives of this state do realize this simple truth, while Turkey continues to inflict to the Kurdish people the same acts of genocide that inflicted against the Greeks, Armenians and Assyrians and while Turkey continues the occupation of Cyprus and maintains its imperialistic views in the Aegean Sea.

Source : “Why Erdogan and the Turkish state are behind the massacre in Ankara”, by Savvas Kalèndéridès, Info gnomon politics (Greece), Voltaire Network, 19 October 2015, www.voltairenet.org/article189048.html

Source : “Why Erdogan and the Turkish state are behind the massacre in Ankara”, by Savvas Kalèndéridès, Info gnomon politics (Greece) , Voltaire Network, 19 October 2015, www.voltairenet.org/article189048.html