World yuan-ization thanks to the City of London

The Government of China promotes the internationalization of «the people’s currency» (‘renminbi’) through a policy of alliances that does not take ideological barriers into account. In a first moment the diplomatic forces of the yuan were concentrated in Pacific-Asia, but in a second moment, it became necessary to gain the support of the West. After the President Xi Jinping visited London, between the 19th and the 23rd of October, the bases of the «golden age» between China and the United Kingdom were established, with which both countries looked to push the yuan-ization of the world economy. 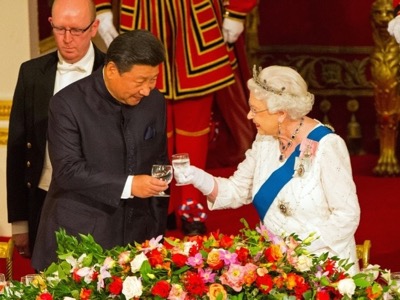 Beijing wants the yuan to be converted into a world reserve currency. It is true that the road to full convertibility is still a very long one. China has seen the presence of their currency increased more than any other country in recent years. The yuan is today the second most utilized currency for commercial financing, and the fourth most demanded for cross-border payments, according to data from the Society of World Interbank Financial Telecommunications (SWIFT).

The strategy of the Asian giant to yuan-ize the global economy is centred in ‘gradualism’. The Chinese leaders are in no hurry. The Communist Party [of China] is conscious of the fact that any false movement can provoke ‘financial wars’ against them. Both the Federal Reserve and the US Treasury Department resist a movement that the dollar and Wall Street would see their influence in world finances diminish.

The Chinese Government takes precautions, since to reach long term objectives, it is better to move step by step, under cover, than to assume high risks. For this reason, in the first place, China added the support of the Asian continent, either underwriting swap agreements, or installing Offshore Clearing Banks (OCB), or giving investment quotas for participation in the Renminbi Qualified Foreign Institutional Investor Program (RQFII).

In a second moment, the Chinese Government looked at Northern Europe. To position their currency in the big leagues the technical advice of Western countries was key. China began by raising the level of their ‘strategic association’ with the United Kingdom, which in spite of a decline in their economy remains the protagonist in the conduct of international finances. It is not for nothing that the City of London has the biggest exchange market in the world and brings together the greatest number of ‘over the counter’ operations.

In mid-1913 the United Kingdom became the first country to promote the use of the yuan in Europe. Germany, France, Switzerland and Luxembourg entered the competition through the installation of OCB to facilitate the use of the «people’s currency» (‘renminbi’). Nevertheless, none of these constituted a serious threat to the United Kingdom. The City of London has more than half of operations denominated in yuan in the European continent.

As the economy of the United Kingdom is in a state of stagnation, and closely threatened by deflation (a fall of prices), the Government of David Cameron desperately insists on strengthening his ties with the Asia- pacific countries, especially with China, that even with their deceleration of the last few years, contributes 25% of the growth of the world Gross Domestic Product (GDP).

For the Chancellor of Finance of the United Kingdom – and the favorite of the Conservative Party to occupy the post of Prime Minister in 2020 – George Osborne, the world today witnesses a new geopolitical and economic configuration, in which China plays the preponderant role. Business affairs are no longer concentrated in the United States and European Union. Because of this, for the City of London, commercial opportunities and investment with Beijing are more important than the commandments of alignment with Washington.

One proof of this is that last March the United Kingdom was added to the convocation of the Asian Infrastructure Investment Bank, the institution that ended the domination of the World Bank and the Asian Development Bank in Asia. Jim O’Neill, former employee of Goldman Sachs, who invented the acronym BRICS (Brazil, Russia, India, China and South Africa) in 2001, is currently an advisor to the British Treasury; for him it is surely clear that economic prosperity is found in the Asian region.

The United States has sent a warship through the Spratly archipelago, accuses China of «cybernetic espionage» and «manipulation of exchange». In contrast, the United Kingdom shows itself to be the principal partner of China in the West. The «golden age» between the two countries is not a novelty, it has been put together rapidly over the last decade. Between 2004 and 2014 commercial exchange between China and the United Kingdom went from 20 to 80 billion US dollars, while Chinese investment in British territory grew at an annual rate of 85% since 2010.

During the visit of President Xi Jinping to London, from the 19th to the 23rd of October, the Government of David Cameron gained more oxygen for the economy. China engaged hundreds of million dollars in investment, from the construction of the nuclear power plant of Hinkley Point to the establishment of a high-speed train from London to Manchester. At the same time, the possibility of connecting the stock markets of Shanghai and London is under study, with which financial paper denominated in yuan would be acquired by a greater number of investment agents.

The recognition of the Government of David Cameron will be decisive in coming weeks. The United Kingdom has already announced that it will vote in favor of the incorporation of the yuan in the Special Drawing Rights (SDR), the basket created by the International Monetary Fund (IMF) in 1969, currently integrated with the US dollar, the euro, the Japanese yen and the pound sterling.

According to the calculations of diverse analysts cited by Reuters, if the IMF approves addition of the yuan to the SDR, the global demand of the ‘renminbi’ will be increased to the equivalent of 500 billion US dollars, and as such, will be saved in the reserves of central banks in a proportion of approximately 5%, well above the Australian and Canadian (each almost 2%), but well below the euro (20.5%) and the US dollar (60%).

In a word, the United States will not be able to undermine the ascent of the yuan. The turbulence of the Shanghai Stock Market in the past few months will not overcome the confidence that the United Kingdom has in the development of the Chinese economy, but on the contrary, their gamble is more ambitious: thanks to the City of London, Beijing is at the point of moving the yuan-ization forward at an unprecedented scale...