The elements presented during a Press conference in Moscow by General Viktor Bondarev, chief of staff of the Russian Air Force, leave no doubt – the Turkish aviation, which had been informed of the flight plan of the Russian Sukhoï, in accordance with the agreements on military co-ordination, had already recieved prior instructions to assume attack position. These elements invalidate the position of NATO. 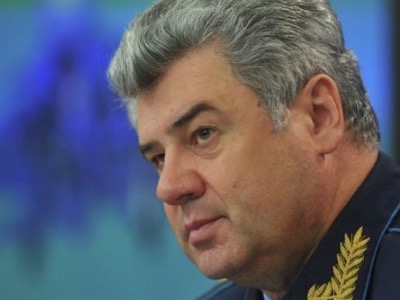 Two days after the attack on the Russian Su-24 by a Turkish F-16 in Syrian air-space, General Viktor Bondarev, chief of staff of the Russian Air Force, made an astonishing declaration which totally changes the image broadcast by the Western media, which has so far published only the Turkish version.

In accordance with the memorandum concerning the Syria campaign signed by Moscow and Washington on the 26th October, the Russian command informed the US 12 hours before the mission involving two Su-24 bombers over nothern Syria. They sent all the details of the mission, including the time of take-off - 09.40 a.m. - the altitude – 5,600 to 6,000 metres - and the targets to be bombed – in the area of the Chefir, Mortlou and Zahia region in the north of Syria, on the frontier of the Turkish region of Hatay. The Su-24 tactical bombers took off from the Hmeymim air base at the appointed hour - 09.40 a.m. - each one armed with four OFAB-250 bombs. From 09.51 until 10.11 a.m., the Russian bombers flew in a holding area at an altitude of 5,650 metres and 5,800 metres respectively, to the south of the Syrian city of Idlib. At 10.11 a.m., the two Russian bombers received the GPS coordinates of their targets, and made a primary vertical passage over their targets at 10.16 a.m., during which they dropped bombs. After having made the necessary manœuvres to position themselves for a second attack, one of the Su-24 bombers was hit by an air-to-air missile fired by the Turkish F-16 at 10.24 a.m. 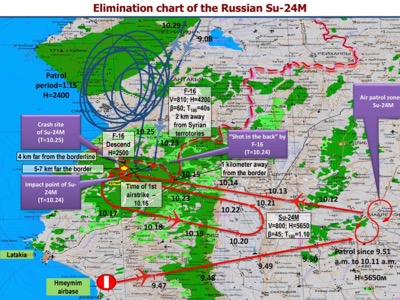 A control analysis of the on-target results, corroborated by the radar network which surveys Syrian air-space, revealed the presence of the two Turkish F-16’s, between 09.08 a.m. and 10.29 a.m., flying at an altitude of 4,200 metres over the Turkish region of Hatay, on the border with Syria. The Turkish planes had taken off at 08.40 a.m., and landed at 11.00 a.m. 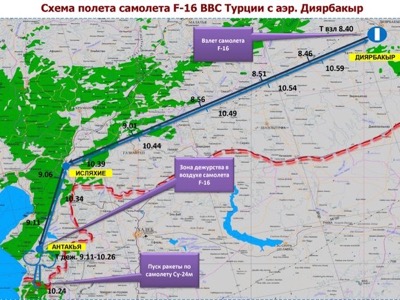 The time necessary for the jets to start their motors and take off from the air base at Diyarbakir and reach their service zone, situated at 410 kilometres from their base, shows that the two Turkish F-16’s had received their orders one hour before the Russian bombers took off. This in turn proves that the two Turkish pilots knew that they would be engaging Russian Su-24’s and were aware of the details of the bombers’ mission, so that they were prepared for their action and were able to position themselves to shoot down the Russian plane to make it appear that the Russians had entered Turkish air-space. They had therefore received orders not to apply the procedure described in the international treaties, which Turkey has signed, in other words interception, followed by visual contact, a warning shot with the on-board cannon, and then, if necessary, destruction.

According to General Viktor Bondarev, the Su-24 bomber had maintained a distance of more than 5 kilometres from the Turko-Syrian border throughout the whole flight, before entering the area in which the Turkish F-16 could fire its heat-seeking air-to-air missile, which flew almost perpendicular to the direction of the Su-24’s. The Turkish plane made a 110-degree turn lasting 1 minute and 40 seconds in order to fire and hit the rear of the Russian bomber. Because of this turn, the Turkish F-16 penetrated two kilometres into Syrian air-space, where it remained for 40 seconds, while the Su-24 only penetrated Turkish air-space for 17 seconds. This was enough for the F-16 to be detected by the radar screens at the Hmeymim air base after the attack, during which it dived to below 2,500 metres. 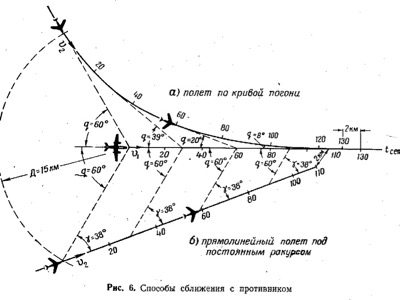 The turn manœuvre positioned the F-16 from 5 to 7 kilometres behind one of the Russian Su-24 bombers, with an approach speed which enabled the firing of the missile. After the attack, there was no recorded radio contact, either from the pilots or the Turkish command, including the channel which was specially designed for co-operative contact.

Bondarev’s conclusion is that the Turkish pilots had spent several weeks training specifically to shoot down a Russian bomber on their border with Syria, and that the final details of the ambush had been carefully refined by the Turks - probably with their NATO allies – during the 12 hours which had followed the arrival of the information sent by the Russians before take-off.