UK House of Commmons Motion on ISIL in Syria 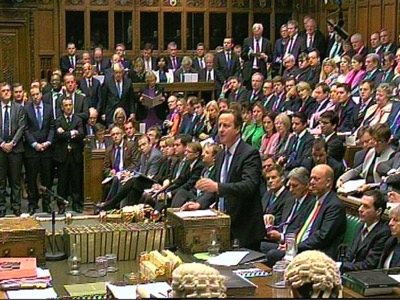 That this House notes that ISIL poses a direct threat to the United Kingdom;

welcomes United Nations Security Council Resolution 2249 which determines that ISIL constitutes an ’unprecedented threat to international peace and security’ and calls on states to take ’all necessary measures’ to prevent terrorist acts by ISIL and to ’eradicate the safe haven they have established over significant parts of Iraq and Syria’;

further notes the clear legal basis to defend the UK and our allies in accordance with the UN Charter;

notes that military action against ISIL is only one component of a broader strategy to bring peace and stability to Syria;

welcomes the renewed impetus behind the Vienna talks on a ceasefire and political settlement;

underlines the importance of planning for post-conflict stabilisation and reconstruction in Syria;

notes the requests from France, the US and regional allies for UK military assistance;

notes the Government will not deploy UK troops in ground combat operations;

welcomes the Government’s commitment to provide quarterly progress reports to the House;

and offers its wholehearted support to Her Majesty’s Armed Forces .