Where will the Ukrainian bombs explode?

While the International Coalition planes bombed a camp of the Syrian Arab Army, December 6, Ukrainian Cyber-Berkut have made public new documents. They show that Qatar has bought Russian-made bombs in Ukraine so as to accuse Russia. 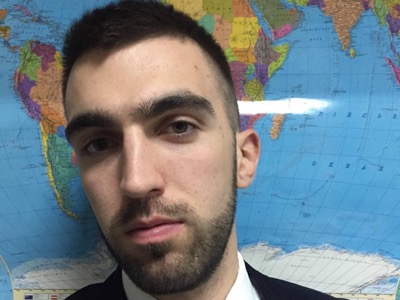 Anton Pashynskyi is the 25-years old son of Sergei Pashynskyi, who is known for his controversial role in the shootings during February 2014 coup in Kiev. The latter is currently a member of Verkhovna Rada (parliament) of Ukraine.

On Dec 7 the Cyber-Berkut made public another set of evidence exposing preparations for false flag attacks in Syria by the Ministry of Defense of Qatar. According to a hacked mail by Anton Pashynskyi, a SpetsTechnoExport (official Ukrainian arms trader) functionary, on Oct 21, 2015 he wrote to his Polish partner Level 11 the following:

“Good afternoon! There is a new proposal. The Qatari military want to buy 2 thousand High Explosive Fragmentation bombs OFAB 250-270. The issue is urgent, they are ready to pay US$2100 per item. Consider how to deliver ASAP. The final recipient is the Ministry of Defense of Qatar. EUC is enclosed.”

OFAB 250-270 is the unguided 250-kg bomb currently used by the Russian jets SU-25 and TU-23M3 to hit the positions of Daesh and sister subversive groups in Syria:

The Qatar Air Force consists of French Mirage multirole fighter jets and Alpha light attack jets. None of them can be equipped with OFAB 250-270. So the legitimate question is:

Why does the Qatari Minitry of Defense want to buy enormous arsenal of the air bombs, not only unfit for their aircrafts, but at a price 3 times (!) higher than the market one? (normally OFAB 250-270 is sold at US$700-800 per item)

The answer is horrifically simple: to make an OFAB 250-270 explode you do not need to drop it from a jet — it can be done right on the ground. Any Qatar-linked terrorist group can drive it to a highly-populated area in Syria and stage a “merciless strike by the Russian aviation”. No doubt the a number of absolutely independent forensic experts would promptly conclude that this type of bomb is widely used by the Russian AF in Syria.

At the end we have to note that some pro-Kiev bloggers are harping on the allegations about “Russian aviation recklessly using unguided bombs close to civilian areas in Syria” since early October.

Below is the End-User Cerficate proved by the Ukrainian seller to the importer. 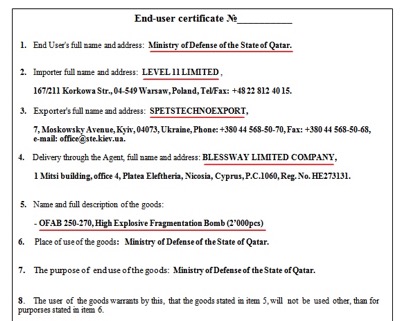