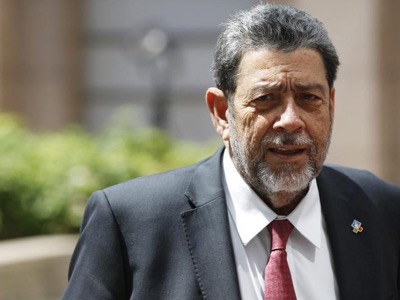 Prime Minister Ralph E. Gonsalves of the Caribbean nation of St. Vincent and the Grenadines

Prime Minister Ralph E. Gonsalves of the Caribbean nation of St. Vincent and the Grenadines won re-election just a few weeks ago as the candidate of the Unity Labor Party. In classic color revolution style, the result of this vote is being contested as unfairly the opposition, which calls itself the New Democratic Party, lead by Arnhim Eustace. Eustace has been using small groups of hooligan supporters to block traffic and promote chaos in the small island nation, which he claims should be viewed as “civil disobedience” and which he claims will continue through the Christmas holidays. In the past, Gonslaves has been an incisive critic of the “election management” activities of SCL of London, which he has described as foreign interference against democracy. SCL has intervened in St. Vincent in the recent past in favor of former Prime Minister The Rt. Hon. Sir James Mitchell PC of the New Democratic Party, a consistent adversary of Gonslaves. Mitchell has warmly endorsed SCL and its work. Mitchell is a member of the SCL Advisory Board. Ted Cruz has hired SCL to run his “psychographic” Iowa campaign. Is Cruz implicated in the preparations for a coup in St. Vincent?