Contrary to appearances, the decision of the United States to investigate a possible Russian aid to anti-European parties is not intended to protect Europeans from foreign interference. This is quite the opposite. For 70 years, Washington controls the West European politics prohibiting all forms of genuine democracy. 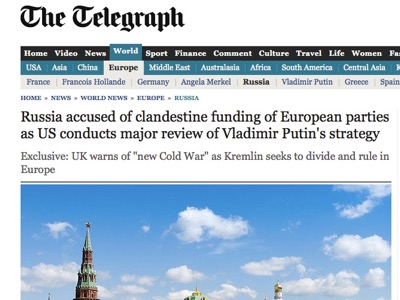 According to a “sensational” article by The Telegraph, the US director of National Intelligence was recently instructed by Congress to “conduct a major review into Russian clandestine funding of European parties over the last decade.” [1] This disclosure —a classic “controlled leak”— is intended to warn disobedient yet popular political entities across Europe to scale back their ambitions to rebalance the roles and weight of their nation states within the European Union. Hungary’s Jobbik, Greece’s Golden Dawn, Italy’s Lega Nord, and France’s Front National are explicitly included in the US “warning list,” while other unnamed “parties” in Austria, the Czech Republic, and the Netherlands are being advised that they are “under a US security probe.” Even the new British Labour leader, Jeremy Corbyn, is suspected of flirting with the Russians. So, according to the sponsor of The Telegraph’s story, any European politician who dares to question NATO’s eastward expansion, the policy of anti-Russian sanctions, or the current European stance on the Ukrainian conflict is essentially a witting or unwitting tool of “Russia’s hybrid warfare.”

Well, that would be funny if it weren’t so dangerous. In fact, any impartial observer would pose some simple questions: Why the hell do US intelligence agencies care about challenges to Europe’s internal security? Aren’t they the same agents who finance, recruit, and control countless political organizations, individuals, and media outlets on the European continent? Why are they so brazenly revealing their dominion over Europe?

A politically correct challenger would argue that the United States saved Europe from the “Communist threat” after the end of WWII, facilitated its speedy economic recovery, and is still safeguarding the continent under its nuclear umbrella. Perhaps. But a review of the historical background should not begin with the Marshall Plan. First of all, that was launched in April 1948. Since the Nazis capitulated in May 1945, a misinformed reader might deduce that the United States had been drafting a massive investment program for Europe for as long as three years, and … he would be wrong. At the Second “Octagon” Quebec Conference in September 1944, President Roosevelt and US Treasury Secretary Henry Morgenthau Jr. submitted to the British PM Winston Churchill their Post-Surrender Program for Germany [2]. That strictly confidential document envisaged the partition and complete deindustrialization of the German state. According to the plan, Germany was to be divided into two independent states. Its epicenters of mining and industry, including the Saar Protectorate, the Ruhr Valley, and Upper Silesia were to be internationalized or annexed by France and Poland. Following are a few excerpts:

• The [US] military forces upon entry into [German] industrial areas shall destroy all plants and equipment which cannot be removed immediately.
• No longer than 6 months after the cessation of hostilities, all industrial plants and equipment not destroyed by military action shall either be completely dismantled and removed from the area or completely destroyed.
• All people within the area should be made to understand that this area will not again be allowed to become an industrial area. Accordingly, all people and their families within the area having special skills or technical training should be encouraged to migrate permanently from the area and should be as widely dispersed as possible.
• All German radio stations and newspapers, magazines, weeklies, etc. shall be discontinued until adequate controls are established and an appropriate program formulated.

That was the original postwar recovery program for Germany, known as the Morgenthau Plan. The notorious Joint Chiefs of Staff Directive 1067 (JCS 1067) addressed to the Commander-in-Chief of U.S. Occupation Forces in Germany, which was officially issued in April 1945, was fully in line with that document [3].

Partition of Germany according to Morgenthau Plan, 1944

The Morgenthau Plan very quickly proved to be a strategic mistake. The United States underestimated the ideological and cultural impact the Soviets would have on European societies. Left to their own judgment, American strategists failed to understand the attraction that a socialist system held for the majority of the population of the liberated nations. A vast spectrum of pro-socialist and pro-communist politicians began winning democratic elections and gaining political influence not only in Eastern Europe, but also in Greece, Italy, France, and other European states (Palmiro Togliatti and Maurice Thorez are just a few who could be named here). Thus Washington came to understand that its forced de-industrialization of Europe could result in Soviet-style reindustrialization and eventual Russian dominance of the continent… Therefore the US had to promptly replace the Morgenthau Plan with one named after Secretary of State George Marshall… Over the course of four years it provided Europe with $12 billion USD in credits, donations, leases, etc., for the purpose of buying … American machinery and other goods. Although the plan undoubtedly revived the economies of Europe, its biggest positive effect was on … the US economy itself! Simultaneously a wave of political repression was launched throughout Europe, most notably in Germany.

The media has largely forgotten about a Soviet initiative, proposed in 1950, to withdraw from the GDR and to reunify a neutral, non-aligned, demilitarized Germany within one year of the conclusion of a peace treaty. As a matter of fact, the resolution adopted at the Prague meeting of the foreign ministers of the Soviet Bloc on Oct. 21, 1950 proposed the establishment of an all-German Constituent Council, with equal representation from East and West Germany to prepare for the formation of an “all-German, sovereign, democratic, and peace-loving provisional government.” Needless to say, the US government and West German administration in Bonn strongly opposed the initiative [4]. While a plebiscite on the issue “Are you against the remilitarization of Germany and in favor of the conclusion of a Peace Treaty in 1951?” was announced in both halves of the divided state, that referendum was held and officially acknowledged only in East Germany (with 96% voting “yes”).vtek The authorities in US-controlled West Germany failed to respond in a truly democratic manner. They refused to recognize the preliminary results of the referendum that had been held since February 1951 (of the 6.2 million federal citizens who had taken part by June 1951, 94.4% also voted “yes”) [5] and introduced the draconian cautious Criminal Law Amendment Act (the 1951 Blitzgesetz) on July 11. According to that legislation, anyone guilty of importing prohibited literature, criticizing the government, or having unreported contacts with representatives of the GDR, etc. was to be prosecuted for “state treason,” which was punishable by 5 to 15 years in prison. Consequently, between 1951 and 1968, 200,000 charges were brought against 500,000 members of the Communist Party and other left-wing groups in Germany under this law. Ten thousand people were sent to prison, and most of those who were “cleared” of charges never resumed their political activities. Additional legal amendments in 1953 actually abolished the right to freely hold gatherings and demonstrations, and in 1956 the Communist Party of Germany was banned.

More details can be found in Daniel Burkholz’s 2012 documentary “Verboten – Verfolgt – Vergessen” (Forbidden-Followed-Forgotten. Half a Million Public Enemies), which is surprisingly unavailable on YouTube. 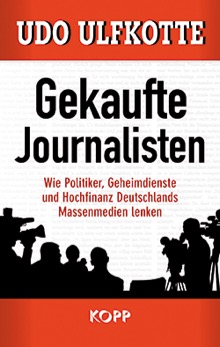 The political repression that occurred in Germany from the 1950s to the 1980s, compared to similar events in other European countries during the same period, is a very taboo topic. Operation Gladio in Italy, the crimes of the regime of the Black Colonels in Greece, and the controversial assassinations of realistic European politicians who openly advocated for historical compromise with the Soviet bloc – such as Italian PM Aldo Moro (1978) and Swedish PM Olof Palme (1986) – all received far more media attention. The revelations made by a former correspondent for the Frankfurter Allgemeine Zeitung, Udo Ulfkotte, in his book Gekaufte Journalisten (“Purchased Journalists”) about the mechanism of media control in Germany (remember the Morgenthau Plan?) represent only the tip of the iceberg. 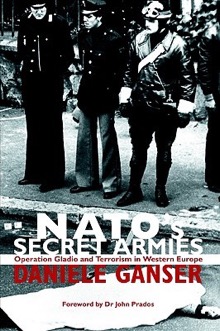 The almost complete lack of reaction seen in Berlin after Edward Snowden’s disclosure of the blanket electronic espionage routinely conducted against German leaders by the NSA means that in reality, Germany has acknowledged its loss of sovereignty over its own country and thus has nothing to lose.

So, after taking all these facts into account and rereading the article in The Telegraph, are you still so sure that the United States is truly the guardian of Europe’s sovereignty? Is it not more likely that by using the alleged “Russian threat” to control and harass the political establishment and civil society in Europe, Washington is making headway toward a simple and primitive goal – that of merely keeping its sheep within the fold?