For the first time in History, a team specialised in psychological operations is attempting to fabricate a candidate for the US Presidential elections and win him a home in the White House. His victory, if they succeed, would prove that it is possible to falsify the electoral process itself. It would also call into question the power of the military on civil institutions. 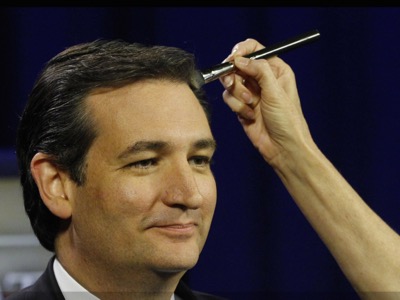 “Psychological Operations » (Psy Ops) are « tricks of war », like the Trojan Horse. Under the influence of General Edward Lansdale, the United States equipped their armies and the CIA with these special Psy Ops units, first of all in the Philippines, in Vietnam and against Cuba, then as permanent fixtures [1].

Psychological Operations are far more complex than propaganda, which is aimed only at deforming the perception of reality. For example, during the war against Syria in 2011, allied propaganda consisted of convincing the population that President el-Assad was going to abdicate, as President Ben Ali of Tunisia had done earlier. The Syrians therefore had to prepare themselves for a new régime. But in early 2012, a psychological operation planned on substituting false programmes on national TV channels which purported to show the fall of the Syrian Arab Republic, so that the population would offer no resistance [2].

Just as today, there exist mercenary armies like Blackwater-Academi, DynCorp or CACI, there also exist private companies specialised in psychological operations, like the British company SCL (Strategic Communications Laboratories) and its US subsidiary Cambridge Analytica. In the strictest secret, they have helped the CIA to organise the « colour revolutions » and are now branching out into the manipulation of the electoral public. Since 2005, they have been participating in the British Defense Systems & Equipment International (DSEI) exhibition, and sell their services to the highest bidder [3]. Concerning Syria, SCL worked in early 2011 in Lebanon, where it studied the the possibilities of manipulating the population community by communuity.

Psychological Operations and the electorate

In modern societies, the political authorities are chosen by election. That may range from a simple choice between pre-selected candidates – according to their personal qualities – to the designation of personalities who are offering a specific political project. In any case, the candidates have to rely on their militants or their employees in order to wage their campaign. We know that the winner is always the person who is able to gather the greatest number of militants. It is therefore necessary not only to fabricate a candidate, but also a party or a movement to support them. However, today’s electors hesitate to subscribe to an organisation, and employees are expensive. SCL came up with the idea of using behavioural techniques in order to fabricate a political party which would sweep its client to power. Its psychologists define the profile-type of the sincere and manipulable militant, then collect the data from the target population, determine who best corresponds to their profile, and design the most efficient messages to convince them to support their client.

For the first time, this stratagem has just been implemented on a huge scale – in the United States, with Ted Cruz.

Robert Mercer, one of the principle donors to US public life, has indirectly paid more than 15 million dollars to SCL-Cambridge Analytica for them to handle Ted Cruz’s campaign [4].

Inventor of a vocal recognition software product, Mercer is today the boss of Renaissance, one of the top investment companies in the world. Between 1989 and 2006, his famous Medaillon fund made an average of 35 % profit per year, at the same time as designing a tax-evasion system for his clients [5].

Robert Mercer has never made any comment about his political opinions, and the US commentators don’t really know how to classify this « Republican ». No-one knows, for example, his position on social problems such as the right to abortion or gay marriage. At best, we know that he does not believe that climate change is caused by human activity, that he clearly opposes Hillary Clinton and his friend Donald Trump, and is close to John Bolton. 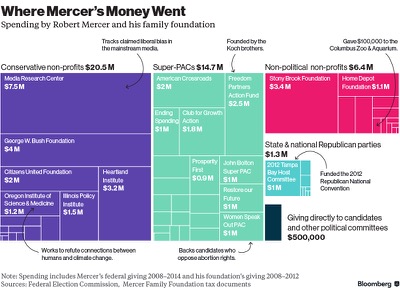 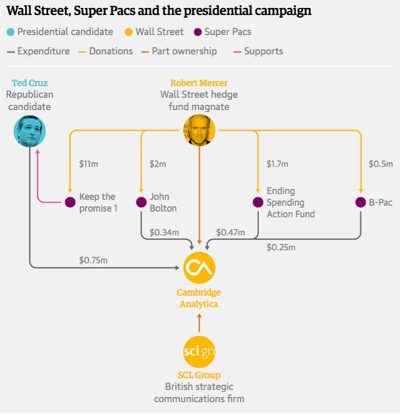 How to cook bacon on the barrel of your gun.

The collection of personal data

In order to select citizens susceptible of becoming militants, SCL/Cambridge Analytica has secretly gathered documentation of millions of electors [6].

Doctor Aleksandr Kogan bought the data from Amazon, the US on-line sales giant, then paid approximately 1 extra dollar per client for a questionnaire to be sent to them via Mechanical Turk (MTurk). By accepting to identify themselves on Facebook, the internaut allowed MTurk access to his or her personal data – MTurk then compiled this data with Amazon’s information and transmitted them to SCL via Kogan’s company, Global Science Research (GSR). Despite the fact that Dr. Kogan assured The Guardian that he worked only on scientific research, and used only anonymous data, they are nonetheless today in the possession of SCL [7].

Within a few months, SCL had at its disposition a detailed data base on more than 40 million electors US - without their knowledge.

In 2008, the International Court of Justice decided to order the United States to revise the trial of a Mexican who had been found guilty without having been allowed consular legal assistance. However, Ted Cruz, then the Solicitor General of Texas, pleaded before the Supreme Court that a Federal State was not obliged to obey a foreign Court as long as the Treaty signed by Washington had not been transcribed into domestic law. He won, the United States denounced the additional protocol at the Vienna Convention, and the prisoner was executed.

The interpretation of personal data

Cambridge Analytica then proceded with an evaluation of each profile according the the OCEAN method, as follows :

« Conscientiousness » (self-discipline, respect for obligations, organisation rather than spontaneity, goal-oriented) ;

« Extroversion » (energy, positive emotions, tendency to seek stimulation and the company of others, “go-getter”) ;

« Agreeability » (tendency to be empathetic and cooperative rather than suspicious and antagonistic to others) ;

For each subject, the study managed to establish a personality graph by using the 240 questions of the NEO PI-R tests – (’Neuroticism-Extroversion-Openness, Personality Inventory - Revised).

On this basis, SCL identified the individuals who constitute sincere, manipulable militants, and then elaborated personalised arguments to convince them.

One might think that personality studies developed without the subjects’ knowledge would be too approximate. And yet…

A brilliant lawyer, Ted Cruz defended the Ten Commandments monument installed at the Texas State Capitol . He drew up the mémoires of the attorneys general of 31 states, according to whom the ban on handguns violates the right to bear arms guaranteed by the second amendment to the Constitution of the United States. He also defended the recitation of the Oath of Allegiance to the flag of the United States, « One Nation Under God », in public schools.

The candidate who seeks to be swept into the White House, Ted Cruz, is an excellent lawyer, a brilliant orator and debater. Specifically, he has pleaded several times, successfully, before the Supreme Court of the United States. He is a libertarian rather than a conservative.

His father, the Evangelist pastor Rafael Cruz, is a Cuban immigrant who preaches that God gave men of faith the job of governing « America ». He claims that at the end of times, which is coming soon, God will give the wealth of evil men to the just [8].

Ted’s wife, Heidi Cruz,was the Director for South America to the National Security Council in the days of Condoleezza Rice. She then became vice-president of Goldman Sachs, tasked with the management of the fortunes of clients from the South-West US [9].

At the start of his Presidential campaign, Ted Cruz generated very few favourable opinions, and the Press commented on his unempathetic character. However, thanks to the help of SCL/Cambridge Analytica, he quickly formed a huge support group, and won the Republican primaries in Iowa.

In 1988, Ted Cruz spoke of his ideals in life : « Take over the world. World domination, rule everything, be rich and powerful, that sort of stuff ».

If he were to win the coveted place in the White House, it would prove that it is possible to subvert an electoral campaign by using the techniques of psychological operations.