The US are using Volkswagen (VW) to test their TTIP power 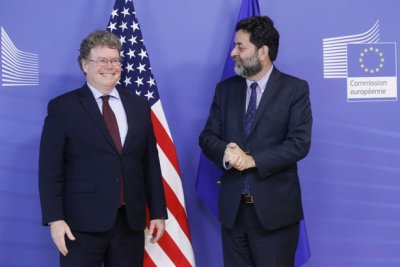 What the United States and their global corporations call “Free Trade Agreement” (TTIP) has been compared to NATO by former US-vice president Biden. It is meant to subject Europe to American economic domination and their interests. This has an inner and an outer goal :

• For a long time, the Juncker clique in Brussels has been working on dismantling the nation states in Europe and on disempowering their parliaments in order to gain central power for the EU Commission. This is why the politburo in Brussels is negotiating in secret with only the US, excluding the nation states and even keeping things secret from them. This is in contradiction to the EU clause of subsidiarity and sovereignty. But centralisation is Juncker’s main programme as has been demonstrated in the financial crisis (from a competitive union to a union of liability and debt and from there to a financial union) and now in Poland in the EU intervention against the disempowerment of US agents in the Polish national broadcasting corporation. Brussels does not tolerate divergent opinions in governments or parliaments nor does it allow any restrictions of US influence in Europe on their part.

• Outwardly, TTIP is meant to start an economic war (just like NATO) of the US economy against Russia (sanctions, oil embargo, currency war). According to the Brzezinski doctrine, the US can only maintain their status as a superpower if they keep their grip on Europe while Europe can only be controlled if the central power Germany is kept under control. This is not only politically true (Atlanticists), but also economically (the majority of DAX companies is controlled by the US). The plan is now that by means of TTIP the whole region be welded into a common Euro-Atlantic economic region, directed against Russia.

This seizure of power over Europe by means of economy politics and commercial law with the help of TTIP is accompanied with attacks on economic strongholds, mainly in Germany, which are not yet controlled by the US. The main target is currently Volkswagen.

Twice General Motors has attempted to take over “the fat VW” by means of unlimited Fed credits. The first time they were beaten by the Porsche family, the second time their lawsuit against Lower Saxony Law at VW (stipulating a vetoing power) was rejected. Now they are trying to bleed VW for a third time, through US lawyers and administrations commissioned by them. The goal is to weaken VW, to make it cheap, in order to be able to take it over for a lower price.

Were VW to try a reciprocal coup in the US, the US government would immediately intervene and declare the transaction a violation of national security. The real current VW scandal is that the German government is not backing VW, that it is obviously more loyal to the US power than to the over a hundred thousand VW employees.

If we allow the Americans to destroy VW in favour of the two American competitors Ford and Opel (General Motors), Germany will lose one of its economic beacons, not only on the national but also on the international level. This illustrates what the US will undertake also against the others of our corporations and know-how monopolists, with the help of US law installed in Germany through TTIP.

And thus it is not surprising that a government that keeps silent about the destruction of VW also tolerates and even supports the seizure of power of the German economy by US corporations. A destruction campaign like the one the US has launched against VW would be inconceivable conversely for Germans in America – and it would not be tolerated by any US government or any Congress. This demonstrates again the worth of a contract between a powerful (the US) and a powerless partner (EU) if it is negotiated between a global power on the one side and its puppet officials on the other (EU Commission) and if the officials of the employers’ association pursue their corporations’ interests, against the majority of their medium- sized member companies.

The importance of the US economic seizure of power over Europe for the US president is demonstrated by Obama’s plan to visit the Hanover Fair in order to “align politics and economy in favour of TTIP.”