Towards a new war in Lebanon

Lebanon has not been respecting its own constitution since May 2008, and no longer has a budget reserve. The country today is essentially adrift, and has once again become an easy prey for Israël. The failure of the operation against Syria has forced the colonial parties to seek a new target. While a second civil war can still be avoided, it will be difficult to avoid a new invasion. 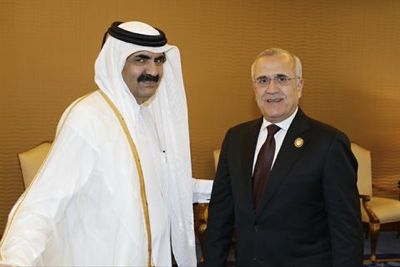 Michel Sleiman was elected on the 25th May 2008 by the House of Representatives, in violation of the Lebanese Constitution (article 49 forbids a senior official from being elected less than two years before leaving his post). He was not inaugurated by his predecessor, Émile Lahoud, but by the Emir of Qatar, in presence of the representative of the old French colonial power, Bernard Kouchner, who was seated not in the gallery, but on the government bench.

Since the Doha agreement and the anti-constitutional election of Michel Sleiman as President of the Republic, in 2008, Lebanon had seen no significant political event until last August. Over the last seven months however, the country has been shaken by the «garbage crisis» and the resulting demonstrations which could have led to a second «Cedar Revolution», then by a crisis of confidence with Saudi Arabia and its allies, and finally by the international accusations against Hezbollah. Three events which, taken separately, seem to be self-explanatory and without great consequence. And yet… 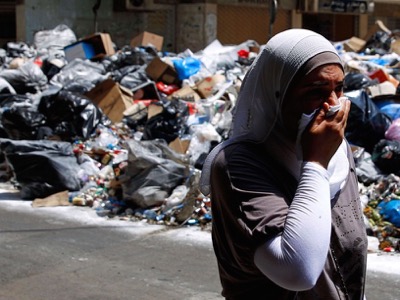 Pestilential odours in many Lebanese communities where garbage is no longer removed.

The «garbage crisis» began suddenly in August 2015 – the state was unable to renew its contract for garbage removal by the Sukleen company. Within a few days, the entire country became a vast trash dump, and rubbish piled up in the streets. There were demonstrations accusing the government of mismanagement. Soon thousands of demonstrators were in the centre of Beirut, shouting that the politicians were themselves garbage, pillaging the state to the detriment of the citizens. The media spoke of the beginning of a colour revolution comparable to the «Cedar Revolution», which was organised by the United States after the assassination of ex-Prime Minister Rafic Hariri – other media called it an extension of the «Arab Spring» [1]. But finally, popular anger receded, because the communitarian system which is unique to Lebanon — imposed by France — defines each citizen according to his or her religious community, and prevents them from taking position on national questions.

However, seven months later, the garbage crisis is still not resolved. The capital and the major cities have indeed been cleaned up, but in many regions, the trash continues to pile up, creating a nauseating atmosphere. The persistence and generalisation of this problem have consequences in terms of public health. Viruses are spreading, and almost all Lebanese citizens suffer from periodic illnesses. There are also economic consequences. De facto, tourism, which is the country’s main official source of revenue, is strongly in decline. 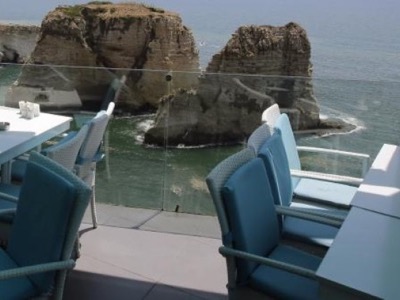 The terrace of the Petit Café in Beirut, facing the rock, is empty. It’s usual clients from the Gulf have deserted.

The second crisis began with the cancellation of the 3 billion dollar gift from Saudi Arabia to the Lebanese Army [2]. In reality, this «gift» was the payment to the Lebanese Army for having destroyed the testimony of Majed el-Majed upon his arrest during his ambulance transfer on the 26th December 2013. The famous terrorist was Prince Bandar Ben Sultan’s representative for the Levant. He was suspected of knowing personally all of the politicians who secretly supported the jihadists. His testimony would have plunged the Saudi kingdom into serious difficulties. However, the prisoner opted for the advantageous initiative of dying after a few days of detention, without his detailed testimony ever having been recorded [3].

To justify the cancellation of his «gift», Riyadh evoked the reaction in Lebanon to the execution of Sheikh Nimr Baqr al-Nimr, a major figure of the Saudi opposition, who was decapitated on the 2nd January 2016 by the petro-dictatorship. It so happens that this personality was a Shia clergyman, and his death created a wave of indignation amongst all the Shia populations of the world, including in Lebanon [4]. Saudi Arabia mobilised its allies to affirm its unalienable right to kill whichever of their subjets they wish, while Lebanon timidly expressed its reservations. Riyadh decided to interpret this as a form of ingratitude, in view of the billions of dollars spent over the years in support of the 14th-March, in other words the coalition of the Lebanese communitarian parties who collaborate with Israël.

Above all, Riyadh decided to sink the Lebanese economy by forbidding its subjects to travel to Lebanon, and by broadcasting this injunction to the Bahreïnis and the Emiratis. Deprived of its Gulf tourists, the businesses and banks immediately went into recession. 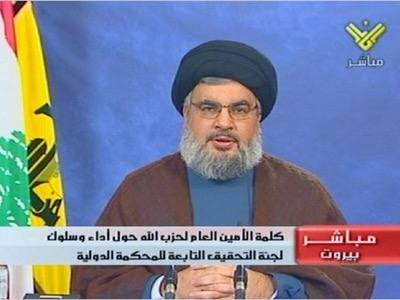 Al-Manar is the only means of communication open to the Lebanese Resistance in case of Israëli aggression. During the war of 2006, Hezbollah managed to maintain it despite the gigantic bombardments perpetrated by Tsahal. If the station were to be cut off, however, only the Western version of events would be known.

The third crisis concerns Hezbollah. This network of resistance to the Israëli occupation has progressively transmuted into a political party, and now participates in government. Mainly supported by Syria in the period between 1982 and 2005, it turned increasingly to Iran after the departure of the Syrian Arab Army from Lebanon. In the period between 2006 and 2013, it received a considerable arsenal from the Iranian Guardians of the Revolution. However, since the election of Sheikh Hassan Rohani in Iran, Hezbollah is preparing for a split and is developing its own sources of finance by connecting with the Lebanese and / or Shia diaspora overseas, mainly in Africa and Latin America. Following the signature of the 5+1 agreement with Iran, on the 14th July 2015, Hezbollah took a stand against the jihadists alongside the Syrian Arab Army, while progressively distancing itself from Tehran.

On the 16th December 2015, the United States Congress unanimously adopted a law forbidding banks to work with Hezbollah or any organisations linked to the Lebanese Resistance, and attempted to cut broadcasting by the Al-Manar TV channel [5]. The text reinforced another published in 2014. Immediately, the Treasury applied sanctions against Ali Youssef Charara, CEO of the Spectrum Investment Group, accused of participating in a system of financing for the Resistance [6]. The US law was followed by a resolution by the Gulf Cooperation Council, then by the Ministers of the Interior and Foreign Affairs of the Arab League, who qualified Hezbollah as a «terrorist movement».

The machinery is now complete – the Lebanese economy is ruined and the principle of Resistance to the Israëli occupation is assimilated with terrorism. The TV channel Al-Manar will no longer be accessible by NileSat and ArabSat, which will severely limit its audience.

Two options are now possible for Washington and Tel-Aviv – either a classical war, like in 2006, or else – more simple and more discrete – a civil war, like the war suffered by Lebanon between 1975 and 1990. The last constitutional President of Lebanon, Émile Lahoud, is calling for an immediate change in the electoral law in order that the next Parliament will not be representative of religious communities, but the population. This is the only way of avoiding civil war.

[6] « Treasury Sanctions Hizballah Financier and His Company », U S Department of the Treasury, January 7, 2016.