The chain of command 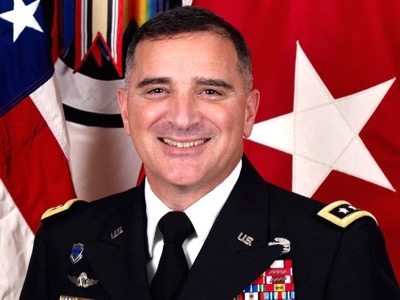 There is a new Supreme Allied Commander in Europe, U.S. Army General Curtis Scaparrotti, chosen according to NATO’s democratic process.

President Barack Obama —who is head of state, head of government and commander in chief of the armed forces— has appointed General Scaparrotti commander of the European Command of the United States, a position that entitles him to simultaneously taking over as Supreme Allied Commander in Europe. The North Atlantic Council, composed of representatives of the 28 member states, then approved the appointment.

This continues the "tradition" that the Supreme Commander in Europe must always be a general or admiral of the United States, which can thus monitor NATO through its own chain of command. The other key commands are also in the hands of the United States.

In Afghanistan, U.S. General Jack Nicholson took over the command of the NATO "Resolute Support” mission replacing U.S. General John Campbell. At the same time, NATO has signed a “Transit Agreement” with Kuwait, which allows it to create the first "hub" (for airport transit) of the Atlantic Alliance in the Gulf. This will serve not only to increase the ability to send troops and military equipment to Afghanistan, but also " the NATO-ICI (Istanbul Cooperation Initiative) Regional Centre will be a hub for NATO’s practical cooperation with Kuwait and other ICI partners, as well as Saudi Arabia and Oman." (nato.int, Feb. 29) The U.S. secretly supported these partners in the war that is slaughtering civilians in Yemen.

The New York Times reports [1] that per a Pentagon plan approved by President Obama —a planning team made up of 45 U.S. officers, under U.S. Marine General Carl Mundy: it provides Saudi Arabia and its allies with information collected by drones that spy on targets to hit in Yemen, and its Special Forces troops trains amphibious units of the Emirates for a landing in Yemen.

Of particular importance in this framework is President Obama’s decision put General Joseph Votel, head of U.S. Special Operations Command, in as the head of the U.S. Central Command, whose “area of ​​responsibility" includes the Middle East, Central Asia and Egypt. This confirms — as underlined by the Washington Post in 2012 [2]— "the preference of the Obama administration for spying and covert action rather than the use of conventional forces."

It is the same President of the United States — the New York Times reported in 2012 in an investigative article, which it confirmed in a subsequent 2015 article [3], who approved the continuously updated "kill list." This list includes people from all over the world who have been judged harmful to the United States and its interests; they are secretly sentenced to death on charges of terrorism.

Although with the interview in the April issue of The Atlantic [4], Obama claimed to have avoided greater damage with his Syria strategy, there remain the greater crimes that weigh on his administration, as on the previous ones. Among them, as shown by Hillary Clinton’s email, is Obama’s secret authorization for covert action in Libya, coordinated with the NATO attack from the outside. Its real purpose was to stop Gadhafi’s plan to create an African currency as an alternative to the dollar and the CFA franc, which would harm the interests of Western multinationals and financial groups.

The order to demolish the Libyan state came first from the president of the United States and from the leaders of its allies, from the summit of the economic and financial power of the 1% that own more than the remaining 99% of the world’s population.