The editor-in-chief of Cumhuriyet, Can Dündar, who was recently freed from prison, published the op-ed column in Le Monde that we are reproducing here. He reveals the stakes of the agreement negotiated between the European Union and Turkey – not to have to assume the consequences of the deliberate destabilisation of Syria in exchange for 3 billion Euros per year and ignoring the dictatorship which is currently being set up by Ankara. 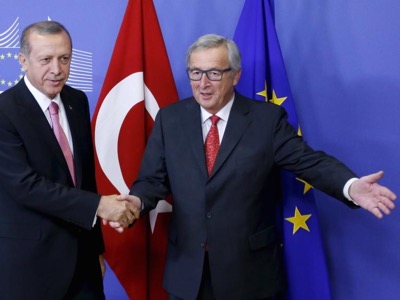 In September 2015, close to 3,000 Syrian refugees began a march toward Edirne, which is Turkey’s open door to Europe. Their objective was to cross the frontier and walk to Germany. Normally, the Turkish police forbids any form of meeting – even three people – but this time they simply watched as the long line of the 3,000 Syrian refugees shuffled by. At first we were unable to understand the reason for this show of tolerance, but very quickly, it became clear that it was a signal sent to Europe.

Two months later, in November, the G20 summit met in Antalya, and bargaining about the refugees occupied the negotiating table. We understand that Recep Tayyip Erdoğan wanted to sit at the table with a strong hand. He was basically saying - «If you don’t do what I want, I’ll open the borders and you’ll see what you’ll see.» It was a filthy bargaining chip, and it seems that the European capitals had no other choice than to accept his bluff.

When the G20 met, the Western leaders found themselves faced with a Turkish President who was quite openly using blackmail. The account of the haggling was published by the Greek site Euro2day.gr, and the content was used ostentatiously by Mr. Erdoğan to build himself a showcase for his own interior politics. According to the accounts, the bargaining between the President of the European Council, Donald Tusk, and the Turkish President took place as follows -

— Donald Tusk : «We have agreed to pay 3 billion Euros over two years, but I have just learned that [Ahmet] Davutoğlu, the Turkish Prime Minister, wants 3 billion per year.»

— Recep Tayyip Erdoğan : «If you’re thinking of only paying 3 billion over two years, there’s no point talking about it, we’ll just open the borders with Greece and Bulgaria and we’ll load the refugees into buses. »

— Donald Tusk : «The European Union is in difficulty [since the terrorist attacks of the 13th November 2015 in France], and the Schengen agreements run the risk of being cancelled. That’s why we want to reach an agreement with you»

This dialogue demonstrates Mr. Erdoğan’s patronising attitude, but the really tragic dialogue came later in the same meeting, between Jean-Claude Juncker, President of the European Commission, and the Turkish President. The Commission had twice postponed the publication of the report on the erosion of Human Rights and fundamental freedoms in Turkey.

It was a gift offered to Mr Erdoğan, who was then preparing for the 1st November elections. In the accounts of the Antalya summit, we note that Mr. Juncker clearly recognised this, declaring: «The postponement of this evaluation until after the elections was critical.»

Once again, Erdoğan looked down his nose: « The postponement did not help us to win the elections. In fact, the report is an insult. Who wrote it? Why didn’t you come to see me to learn what’s really happening?» Jean-Claude Juncker replied: «It was you who asked us to postpone the publication of the report. I feel as if I’ve been manipulated.»

Europe had indeed been manipulated. It had proposed a bribe of 3 billion Euros to Turkey to keep its borders closed, and had promised to close its eyes to the despotic régime of Mr. Erdoğan. But the Turkish President had understood the impossible situation in which his interlocutors found themselves.

He wasn’t satisfied with the postponement of the publication of the report, nor the offer of 3 billion Euros, he wanted not only 3 billion more, but also even more complaisant silence – and he got it all. On the day the minutes of the meeting were published, German Chancellor Angela Merkel, was in Ankara.

During the joint Press conference organised with Davutoğlu, the correspondant from Die Welt reminded the Chancellor of her prevuious criticism of Turkey, and asked her why she had chosen to keep silent.

Mme. Merkel off-handedly replied that the point had already been discussed. As for Davutoğlu, he declared: «The fact that you ask this question is proof of the freedom of Press which exists here in Turkey.»

Indeed, in Turkey, journalists were free to ask questions, on the condition that they run the risk of losing their job or going to prison. This situation has made Turkey into one of the largest prisons for journalists in the world.

While Davutoğlu declared that «... in Turkey, no journalist is in prison because of his journalistic activities», I was sitting in front of the television in the prison to which I had been sent for having published information concerning the delivery of arms to Syria by the Turkish secret services. And in the isolation of my cell, I shouted: «What a huge lie!» It is true that two weeks after this Press conference, the Constitutional Court decided that we were to be released on conditional liberty, on the grounds that we had done nothing other than our jobs as journalists. In hindsight, we see a Turkish Prime Minister who lied to Europe and a German Chancellor who gave the impression that she believed his lies.

Turkey, which fought its war of independence against the occupying forces of the West, was nonetheless founded on the basis of Western values. Its leader, Atatürk , built this young Republic on European values, beginning with secularism.

Turkish democrats have always proclaimed Western values - freedom, the supremacy of law, Human Rights, secularism. As for Mr. Erdoğan, during an interview he accorded to journalist Nilgün Cerrahoğlu in 1996, he declared: «Democracy is a tramway – you climb on to get where you want to go, and then you climb off.»

Today, twenty years later, it is with sadness that we must watch European leaders rushing towards the tramway from which Erdoğan has just descended, abandoning beside the tracks all those in Turkey who adhere to these democratic values.

The West is sacrificing its historic principles for the profit of its daily interests, and as a result of this double game, is losing all its natural allies. By saying : «Keep those refugees away from us and do whatever you like at home», Europe is hiring a concentration camp outside of its own frontiers, and is closing its eyes to the oppression exerted by the willing guardian of the camp. This is not only a shameful thing for the West, it is also shameful for Humanity.

This is not a fight between the West and the East, nor a fight between Europe and Turkey, it’s a fight between those, whether in the West or the East, who believe in the freedom of the Press, in Human Rights, in Democracy, and those who trample on these freedoms. If these people are beaten, the losers will not only be the Democrats of Turkey, but all of those universal values like secularism, the equality between men and women, freedom of thought, and the independence of justice .

In case of defeat, Europe will have increasing difficulty in defending its frontiers from the pressure of despots which it created with its own hands.

Source : “The European Union has abandoned those who are defending freedom in Turkey”, by Can Dündar, Translation Pete Kimberley, Le Monde (France), Voltaire Network, 19 March 2016, www.voltairenet.org/article190844.html

Source : “The European Union has abandoned those who are defending freedom in Turkey”, by Can Dündar, Translation Pete Kimberley, Le Monde (France) , Voltaire Network, 19 March 2016, www.voltairenet.org/article190844.html