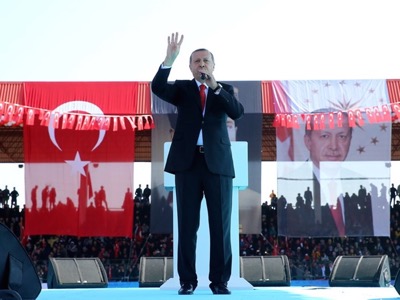 We are reproducing here an extract from the televised speech given by President Recep Tayyip Erdoğan on the occasion of the ceremonies for the 101st anniversary of the battle of Çanakkale («the battle of the Dardanelles»), and in remembrance of the victims of the attack perpetrated in Ankara a few days earlier.

(…) I would like to draw your attention to the fact that all of the terrorist organisations operating in our region and our country are united against Turkey. On the other hand, many states, and in particular the Western powers, are still unable to take a principled position against these organisations.

Today there is a meeting in Brussels, in Belgium. Belgium allows them to erect a tent and wave their rags around, just behind the building where the meeting is held. They are not honest, they are not sincere, they are acting in an ambivalent manner. Today they have removed their flags and their posters.

Who are you trying to deceive? Be honest, honest and sincere. The Turkey you are facing is not naïve, you had better believe it.

That’s known as giving in to terrorism, they have given in to terrorism. And here it is - there is no reason that the bomb which exploded in Ankara might not explode in Brussels or another European city, in a city centre where partisans of a terrorist organisation are allowed to produce their show. The fact that the European states continue to act with negligence, despite this evident reality... it’s like dancing in a minefield. You can never know when you’re going to step on a mine, but it’s obviously an inevitable outcome.

(…) Here I am appealing to all states who open their arms and who, directly or indirectly, support terrorist organisations. You are feeding a serpent in your bed. and this serpent that you are feeding may bite you at any moment. Perhaps looking at these bombs which explode in Turkey on your television screens means nothing to you – but when the bombs begin exploding in your cities, you will certainly understand what we are feeling. But then it will be too late. Stop supporting these activities which you would never tolerate in your own countries, except when they are aimed at Turkey.

When there is a bomb attack in your country, and one of your deputies makes a courtesy visit to the family of the kamikaze, I know very well what you can do to him. In the same way, if people with university degrees, or degrees in journalism, or representatives of civil societies in your country offer their support to a terrorist organisation which acts against the unity and the integrality of your country, we can also predict what your attitude will be. Relax. Turkey is fighting terror in conformity with the principles of the rule of law, it is more democratic, much more tolerant than the Western countries who are currently exposed, or who will be exposed, to a similar threat. We are going to proceed as we always have. (…)