Many have insisted on promoting the idea that the recovery of the United States economy is gathering strength for some time. Even high level functionaries of international financial organisms have declared that the North American economy has managed to escape the tendency of low growth that prevails in the rest of industrialized countries. Nevertheless, this unlimited optimism contrasts with the reality: inflation has not increased in any significant way and unemployment has been chronic in more than 30 states of the American Union, with this, the dangers of deflation persist and with this a new recession. 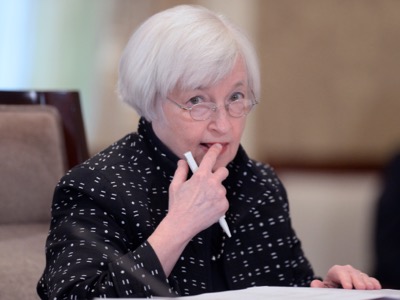 The North American economy has increased the risks of becoming the epicentre of the next global recession. In spite of the fact that the federal funds interest rate is maintained at a historically low level, between 0.25 and 0.50%, the banks continued denying credit to business. The bankers had no confidence that their loans would be paid, simply they did not find confident signs of recovery in production.

In these moments the magnates of finances of the United States found it more profitable to engage in mergers and acquisitions among corporations, acquire their own actions, or buy goods rooted in emerging countries. The increase in productivity is not sufficient, business investment is too weak and wages are stuck. In consequence, inflation remains below the objective of 2% [1]. This situation was desperate for the Chair of the Board of Governors of the Federal Reserve System (FED), Janet Yellen, who found no way to stimulate the economy.

The process of recovery is fragile to the point that in mid-March the Federal Open Market Committee (FMOC) of the FED left intact the federal funds interest rate. We recall that in last December, when we saw the first increase in the interest rate in nearly a decade, Dean Turner, an analyst with the financial services firm UBS, prognosticated that members of the FMOC would raise the interest rates four times in 2016 [2].

Nevertheless, today the most optimistic stock market investors believe that there will be at most two increases: always and when the labour market improves and inflation increases, this will be during the second half of the year when the FED again raises the reference interest rate at least one-fourth of a percentage point. The panorama today is more sober. Every time that confidence in the global recovery of the economy under the leadership of the North American locomotive has faded, there are even some who think that the United States will again fall into a recession.

In accord with the calculations of the team of advisors of Citigroup under Willem Buiter, the world economy expanded 2% during the final quarter of 2015, the lowest figure since the Euro Zone suffered the most serious ravages of the sovereign debt crisis during the years 2012 and 2013 [3]. The economists of Citigroup are surprised that the industrialized countries, those that have enjoyed a more solid growth of the Gross Domestic Product (GDP) in recent months are now decelerating dramatically, especially the United States.

For the famous North American businessman, Jim Rogers, the scenario is even more pessimistic. In his judgement, there is a 100% probability that the economy of the United States will fall into recession during the present year. “One should not pay attention to the figures of the government, we must pay attention to the real numbers”, he said in an interview [4].

It happens that during the first months of the year the United States economy showed new signs of vulnerability. The evolution of the labour market is not as buoyant as everyone believes [5]. According to data published by the US Department of Labor. The non agricultural payroll added a record of 242 000 jobs in February, with which the rate of official unemployment was maintained for the second consecutive month at 4.9%, the lowest for the past eight years. In addition, according to data from previous months, in January hirings increased to 172 000, while in December of 2015 they rose to 271 000, a revision to the rise of 30 000 employees in both cases.

Apparently, everything was performing favourably for the North American economy. The increase in the non agricultural payroll in the past month showed increases to 230 000 jobs, the monthly average obtained over 2015. Nevertheless, according to the figures of the US Department of Labor, 80% of the new jobs in February corresponded to sectors with poorly paid wages: health care, social assistance, retail trade, food services and private educational services [6]. On the other hand, if one counts those persons who have abandoned the search for employment (1.8 millions), as well as those in part time jobs (6 millions), underemployment reaches a rate of 9.7% [7].

It is obvious that the United States does not enjoy “full employment”. At the present time 36 states of the American Union suffer chronic unemployment, since their average rate of unemployment (in annual terms) was higher in 2015 than in 2007. In fact, in a research [8] produced by Danny Yagan and published by the University of California (Berkeley) some days ago, under the present rhythm of recovery, it will not be until 2020 when the labour market in the more depressed regions will return to normal: more than a decade after the Great Recession, the same that threatens to return stronger than ever….

[7] «Table A-15: Alternative measures of labor underutilization», US Bureau of Labor Statistics.