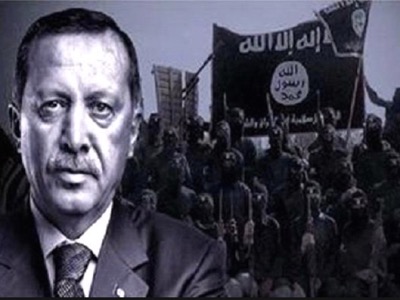 The main supplier of weapons and military equipment to ISIL fighters is Turkey, which is doing so through non-governmental organizations. Work in this area is overseen by the National Intelligence Organization of Turkey. Transportation mainly involves vehicles, including as part of humanitarian aid convoys.

The Beşar foundation (President — D. Şanlı) is most actively engaged in pursuing these objectives and, in 2015, formed around 50 conveys to the Turkmen areas of Bayırbucak and Kızıltepe (260 km north of Damascus). Donations from individuals and entities are “officially” its main source of funding. In point of fact, the organization’s account receives such funds from a specific budget allocation of the National Intelligence Organization [MIT]. The Beşar foundation has opened current accounts in Turkish and foreign banks with the support of the Government.

The İyilikder foundation (President — Mr. I. Bahar) is also a major supplier of weapons and military equipment to Syrian territory under ISIL control, having dispatched around 25 different supply convoys in 2015. The leadership of this non governmental organization is funded by sources from European and Middle Eastern countries. Funds in hard currency are transferred to Kuveyt Türk and Vakıf bank accounts.

The Foundation for Human Rights and Freedoms [IHH] (President — Mr. B. Yıldırım) is actively engaged in delivering munitions to terrorists in Syria. It is officially supported by the Government of Turkey and acts under the direction of the Turkish intelligence services. Since 2011, the foundation has sent 7,500 vehicles with various supplies to territory under ISIL control. This organization is funded from Turkish sources and by other States. The Turkish banks Ziraat and Vakıf are used for fundraising.

Furthermore, to address the challenge of delivering weapons and military equipment to ISIL-controlled territory, officials from the National Intelligence Organization have arranged for control over the weapons and ammunitions stores located in the border towns of Bükülmez and Sansarin (530 km south-east of Ankara, Hatay province). The weapons are delivered to fighters through the Cilvegözü checkpoint (530 km south-east of Ankara), with the support of Turkey’s intelligence officers and gendarmerie forces.

For example, between 2 and 8 November 2015, a batch of weapons was transferred from the Cilvegözü checkpoint to the town of Atma (310 km north of Damascus). Fighters in the area were supplied with rounds for TOW anti-tank missile systems and for RPG-7 grenade launchers, as well as ammunition for small arms.

Between 11 and 21 January 2016, Turkish intelligence officers supplied Jabhat al-Sham terrorists with 7.62mm and 12.7mm ammunition and with rounds for RPG-7 grenade launchers. The cargo was transferred across the Turkish-Syrian border, in the area of Kizilcat (540 km south-east of Ankara), to a fighters’ camp in the province of Latakia. Some of the weapons and ammunition received were subsequently sold by field commanders to ISIL representatives (in exchange for petroleum products, food and tangible assets).

On 25 January 2016, the Turkish Foundation for Human Rights and Freedoms financed a shipment of equipment and food (approximately 55 tons) to ISIL terrorists. The union of fraternal societies and foundations of Turkey was responsible was forming the convoy. The “humanitarian cargo” travelled through the Yayladağı border crossing (530 km south-east of Ankara, Hatay province) to the Bayırbucak district. Earlier, in July 2015, the Foundation assisted The Association for Human Rights and Solidarity for the Oppressed in transferring over 177 tons of military cargo to the north of Syria.

The bulk of the chemical components are purchased in the south-eastern provinces of Turkey (Mersin, Hatay, Kilis, Gaziantep and Şanlıurfa) with the assistance of local companies. In particular, one company acting as an intermediary is Tevhid Bilişim Merkezi (city of Şanlıurfa, Alcak district, Bağdat trading centre, office 1). The owners of the company, Ismail and Ahmet Bayaltun, acquire products manufactured in enterprises from the “Mersin free economic zone” (city of Mersin) and ensure that the cargo is then dispatched to the fighters. In addition, the company Tsitrkimya (Istanbul, owner Zaur Guliyev) supplies aluminium powder directly to ISIL.

In order to pass through the border controls unimpeded, effectively with the complicity of the Turkish authorities, products are processed for companies that are purportedly registered in Jordan and Iraq. “Transit through the Syrian Arab Republic” is indicated in the supporting documents, under the section on method of delivering the cargo to the recipient. Registration and processing of the cargo are organized at customs posts in the cities of Antalya, Gaziantep and Mersin (Turkey). Once the necessary procedures have been carried out, the goods pass unhindered through the border crossings at Cilvegözü and Öncüpınar (520 km south-east of Ankara, Kilis province).

Turkey regards DEASH/ISIL as a terrorist entity and a threat to its national security. Turkey’s efforts both at the national level and in close cooperation with its partners to counter the threat by DEASH/ISIL, including its financing, are well known to the international community, as well as to the relevant United Nations entities, as stated in our letters S/2015/1029, S/2016/126 and S/2016/224, respectively dated 24 December 2015, 8 February 2016 and 8 March 2016.

Turkey fully abides by all its obligations under international law in the field of chemical weapons. However, the Syrian regime is directly and indirectly responsible for the use of chemical weapons in Syria. We expect the Russian Federation to use its influence on the regime to encourage it to respect international law, comply with the relevant Security Council resolutions, fulfil its obligations under the Chemical Weapons Convention and fully cooperate with the Organization for the Prohibition of Chemical Weapons regarding the gaps, discrepancies and inconsistencies in its declarations.

Through its disinformation campaign, the Russian Federation aims at shifting the focus of the international community from the civilian deaths, havoc and enormous destruction caused in Syria by the regime and by the Russian military operations.