Who really threatens us?

Nato is not a military alliance between sovereign states but a pact establishing relations between a suzerain and its vassels. Accordingly, the very essence of such an organization violates the principles of the UN Charter as highlighted in the Badung Conference in 1955. And as there is no susceptible enemy to justify this situation, Nato is undertaking to make one up. 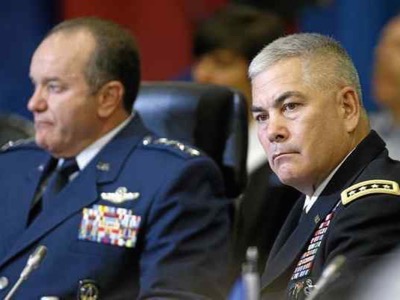 How can we justify war if there is no enemy that threatens us? Simple: it’s enough to invent one or fabricate one. This is what General Phillip Breedlove, head of the US European Commandment teaches us. He is going to pass to another USA General the baton of the Supreme Allied Commander in Europe.

In his last hearing at the Pentagon, General Breedlove warns that «Eastern Europe is faced with a Russia that is aggressive and rising. This can pose a long-term existential threat ». By saying this, he stands reality on its head: a new Cold War in Europe, against the interests of Russia, was provoked by the putsch in Maidan Square. This was the US/Nato strategy and it continues to feed tensions, justifying the growing expansion of forces in Eastern Europe.

In Ukraine, a joint multinational Commandment for training has been established «until 2020» of armed forces and Neonazi battalions of the National Guard, which are the responsibility of a hundred trainers of the US Division 173A transferred from Vicenza, with British and Canadian forces at their flanks. Breedlove emphasizes that the US European Commandment is working with allies to «block Russia and to prepare itself for war if necessary ».

In the South, the Supreme Allied Commander in Europe warns, «Europe has before it the challenge of mass migration triggered by the collapse and instability of entire states, and Isis that is spreading like a cancer, threatening European nations». Therefore he argues that the «Russian intervention in Syria has complicated the problem, since it has done little to block Isis and a great deal to prop up the Assad regime.».

Stand reality on its head once again: the USA and NATO are the ones that have provoked by war the Libyan state to collapse and the Syrian state to be destabilized and consequential mass migration, supporting the formation of Isis, that is functional to their strategy. The US and NATO have feigned fighting ISIS, while the Russian intervention in Syria, by supporting the government’s forces, has brutally struck Isis making it withdraw.

Now that Russia has achieved its primary objective and is re-evaluating its commitment in Syria, Nato under US command is extending its military presence in the Middle East.

On 29 February, the NATO Secretary General, Jan Stoltenberg, signed with Kuwait an agreement that permits it to create the NATO’s first airport stop in the Gulf, both for war in Afghanistan and for «Nato cooperating with Kuwait and other partners», notably Saudi Arabia, supported by the Pentagon in the war that massacres civilians in Yemen.

On 2 March, in Abu Dhabi, Stolternberg has strengthened «cooperation with the United Arab Emirates in order to address common security challenges».

On 17 March he received King Abdullah II in Brussels, in order to strengthen the «partnership» between Nato and Jordan».

In Africa — while preparations are made for the operation that, under the cover of freeing them from Isis, is looking to occupy areas in Libya that are the most important economically and strategically – is in progress from Senegal to the Gulf of Guinea, the exercise Obangame/Saharan Express, in which participate in an «antiterrorism and antipiracy» capacity, the naval forces of the Usa, Europa, Africa and even Brazil. Led from the general quartier of Naples by the US Naval Forces Europe-Africa, whose mission is «to promote the national interests of the US, security and stability in Europa and Africa».