Will President Erdoğan Succeed in Depriving 5 Million Turks of Their Nationality?

As they evolve. President Erdoğan’s declarations stray more and more from universal values. While in the West, people are beginning to emit feeble criticisms of the so-called "authoritarian drift" of Ankara, Thierry Meyssan continues his narration of the establishment of a dictatorship based on the supremacy of Turkish ethnicity and "Islamic values". 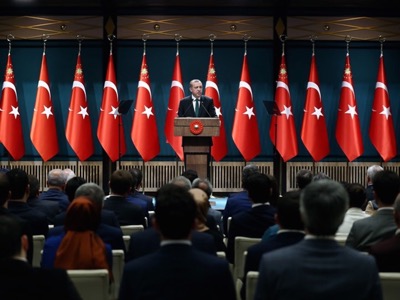 Reception for Lawyers at the White Palace.

The Turkish government being the world record holder for imprisonment of senior officers, lawyers and journalists, much was expected of the speech that President Recep Tayyip Erdoğan would deliver on April 5, 2016 at the White Palace on the occasion of the Law Day.

Erdoğan blew hot and cold before an audience of silent jurists. According to him, yes, professional structures must be pluralistic. However, this goal cannot be achieved without first cleaning the Bar of the influence of partisan groups, that is to say political opponents.

The current problems of the country are the result of the decline of "Islamic values" and foreign oppression, he said.

Mocking the Tribunal which ruled the illegality of the construction of the White Palace in a protected national park, President Erdoğan denounced foreign forces who organized the events of Taksim Gezi Park, in 2013, on the pretext of saving trees that had to be felled to build a shopping center. Ridiculing his opponents, he was keen to remind his dumbfounded audience that during his term as mayor of Istanbul, "he had not planted millions of trees" in the city, "but billions" (sic) and, therefore, had no lessons to learn from anyone.

The President then observed that the enemies of the Turkish nation do not disarm. They have now taken control of a political party linked to terrorists. Therefore, a procedure will be launched to remove the elected representatives of the unworthy party from office. However, excluding them from Parliament will not be enough to raise the Turkish Nation. This will be possible only by depriving of their nationality all those who support this party and therefore "terrorism", he concluded coldly.

To stay in power, President Recep Tayyip Erdogan grossly rigged the November 2015 elections. However, many smaller political parties had come together within the HDP and obtained more than 5 million votes (10%). They intend to promote equal rights for all citizens, regardless of ethnicity, religion, gender or sexual orientation.

The removal of elected officials and the deprivation of citizenship of 5 million citizens violates international norms and treaties. Yet no international personality has reacted to the "President’s" proposals designed in practice to deprive Kurds and Christians of their nationality. It’s that the European Union, obsessed by its hatred for the Syrian Arab Republic, has concluded an agreement with Ankara to both fund the war and to control the flow of refugees it causes. 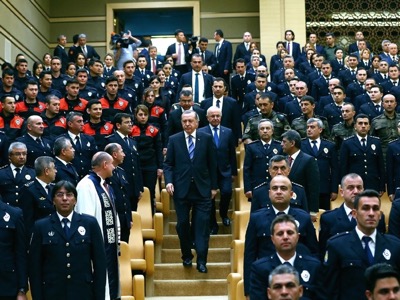 Reception for the National Police -already purged- at the White Palace.

Two days later, on April 7th, President Erdoğan received the leaders of the National Police. After singing the praises of the Forces of order and denouncing the evil done to them by "parallel institutions" [that is to say, the followers of his former ally Fethullah Gülen], he recalled that only his definition of "terrorism" is just and acceptable; a definition that he carefully avoided to explain, but that designates all those who refuse the domination of ethnic Turks.

"All those involved in this nonsense, refusing to call a terrorist a terrorist, are responsible for every drop of blood," he said. And remember that if he had not launched a vigorous anti-terrorism policy after the attack in Suruç July 20, 2015, terrorism would have spread around the country.

Most importantly, how can one not recognize the greatness and generosity of Turkey, a nation like no other, that hosts 3 million refugees? And what right has the European Union to demand that Ankara apply the agreement concluded on March 18th while Brussels still has not fulfilled its part of the contract, the Schengen visa exemption for Turkish nationals?

This time the audience was his own. No one dared point out that the attack in Suruç not only was not the doing of the HDP, but it was the target. No one dared to point out that 3 billion Euros paid for 200 migrants received in return is not exactly an imbalance to the detriment of Turkey.

President Erdoğan no longer hides his project for the domination of Turkish ethnicity and the creation of a 17th empire.

Driven by racial logic, he just opened a procedure to remove the parliamentarians of the party of minorities, the HDP. He now plans to deprive all voters of the HDP of their nationality, that is, 5 million opponents.

Given the passivity of the European Union, he is trying to push his advantage further by suspending the agreement concluded on March 18th until Brussels exempts Turkish nationals from Schengen visas.